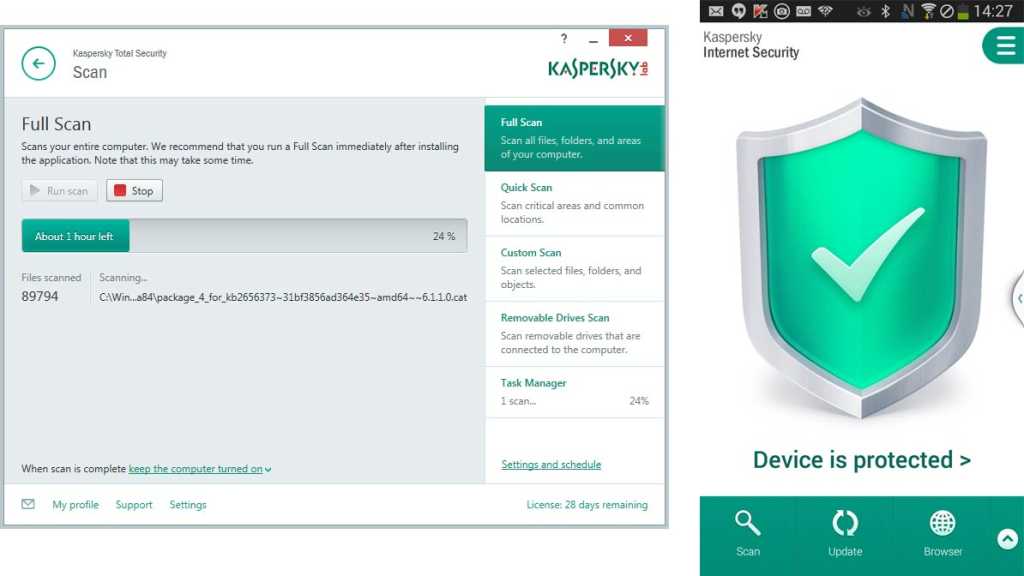 A three-device, full protection IS suite for under £50 is good value and when that includes cover on all the major platforms, it should be flexible enough for most. Kaspersky Total Security 2015’s technical strength can’t be faulted, with only Avira Anti Virus Pro matching it in the AV-Test group.

Kaspersky was one of the first and is now one of the best-known internet security software providers. The 2015 version of its top-of-the-line product aims to protect not only PCs, but Macs, Android devices and iPhone/iPad. Here’s our Kaspersky Total Protection 2015 review.

You can buy the product in one, three and five device licences and mix and match the platform versions as you want. It’s a shame Kaspersky hasn’t gone the same route as McAfee and offered a one-off price for as many personally-owned devices as you need. (See our chart of the best anti-virus software.)

Installation is straightforward and initial setup is pretty automatic, without the need to tweak too many settings for basic protection. The interface is clear cut, which each tile in the home window leading to status information and settings.

This includes Safe Money, which recently won an AV-Test innovation award. It protects banking details by combining site security checks with encrypted connections and a virtual keyboard. New features include webcam security, to stop intruders hacking into your notebook, tablet or phone camera.

The backup module copies files to local, network or online storage, though the package only includes the standard 2GB available free from DropBox.  Even with five devices covered, you have to buy any extra storage you need, which seems a bit mean.

The software doesn’t include a tune-up module, but does have a vulnerability scanner, which checks for unprotected fragments of program code, and a useful tools page which shows processor, memory, disk and network use in real time.

Scanning a system isn’t that quick. It took 1 hour 54 minutes to scan 494,295 files from our 50GB test basket, giving a scan rate of 72.3 files/s. This lies towards the lower end of the range of those IS products we’ve tested and is only slightly faster than last year’s Kaspersky PURE 3.0, which managed 68.7 files/s.

Repeating the test on the same file-set took 33 minutes to examine 174,608 files, so there’s a fair degree of intelligence in not re-examining unchanged files. Again, not the best we’ve seen, though.

Our resource impact test measured only an eight percent increase in copy time when a Total Security system scan was running as a background task, which is good, and reflects AV-Test’s ( www.av-test.org) PC test results.

The Performance score, which measures the impact of the software on a wider range of tasks, such as visiting websites and downloading software, showed no slowdown at all for the Kaspersky software and was scored 6.0/6.0.

That score is also true for the Usability category, which shows the number of false warnings and blockages when running legitimate software. Total Security 2015 produced just one false detection throughout the complete two-month test period of the test.

Finally, looking at both zero-day malware attacks and detection of widespread and new malware, the software was 100% accurate in spotting threats, gaining another 6.0/6.0. This gives the suite an exemplary overall score of 18.0/18.0.