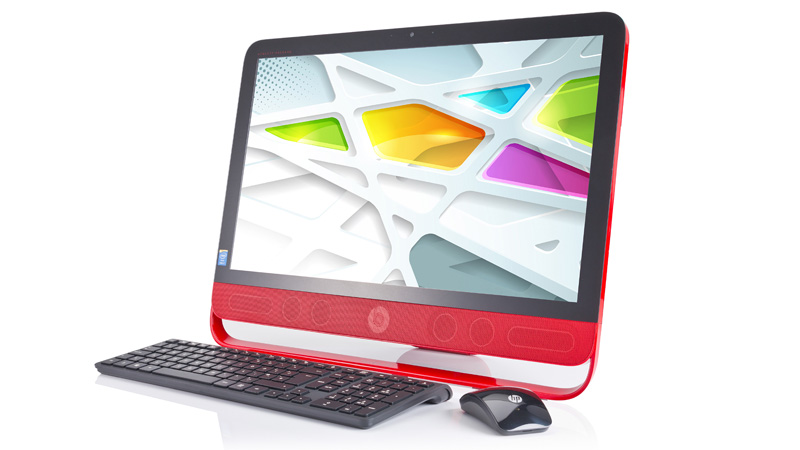 The HP Envy Beats All-in-One 23-n001na is a great looking, and great sounding PC, with eight integrated speakers and a selection of music software included. It features a fast Intel Core i7 processor and feels responsive, but there’s no getting away from the fact that it should have performed much better than it did in our performance tests. If you’re not interested in its audio capabilities, then the price is also rather high.

With its bright red finish and glowing ‘beats’ logo, the HP Envy Beats AIO PC has striking good looks matched by high build quality. While it won’t be to everybody’s taste, it’ll certainly appeal to those who want something a bit different which will stand out from the crowd.

It’s a 23in model featuring 10-point multi-touch and an IPS display panel that delivers good colour reproduction and viewing angles. The all-in-one PC features a hinged support at the back, which allows it to tilt back 60 degrees, allowing comfortable touch input for extended time periods. The HP Envy Beats also features a small slide-out hook, where you can hang your headphones and a built in DVD re-writer.

The AIO PC offers an impressive specification, including a 2.2GHz quad-core Intel Core i7-4785T processor with turbo speeds up to 3.2GHz. However, the HP Envy Beats’ performance was sadly disappointing.

Leaving aside MSI’s budget Adora20, which costs one third of the price, the HP Envy Beats AIO turned in the slowest benchmark results of all the all-in-one PCs we’ve recently reviewed, losing out even to a dual-core Core i5 with a maximum turbo speed of 2.6GHz. Even the graphics performance is worse than we wold have expected, the HP system featuring Intel HD Graphics 4600 yet performing slower than an Asus rival that has only Intel HD Graphics 4400.

Measured display performance is also a little underwhelming, with a rather low (but comfortable) brightness and poor measured contrast, but in general use there wasn’t much perceptible difference between higher scoring displays and text rendering was pleasing to the eye.

Performance aside, the HP Envy Beats All-in-One is a very nice PC to use with build quality that makes it feel like a premium product. However, its stand-out feature is most certainly its built in audio system. Featuring a total of eight speakers, the HP PC delivers good sound quality of the group with great clarity and superior bass reproduction. It also comes with various audio configuration options, including virtual surround. To take advantage of the superior audio, the PC is bundled with a selection of music creation and DJ software.