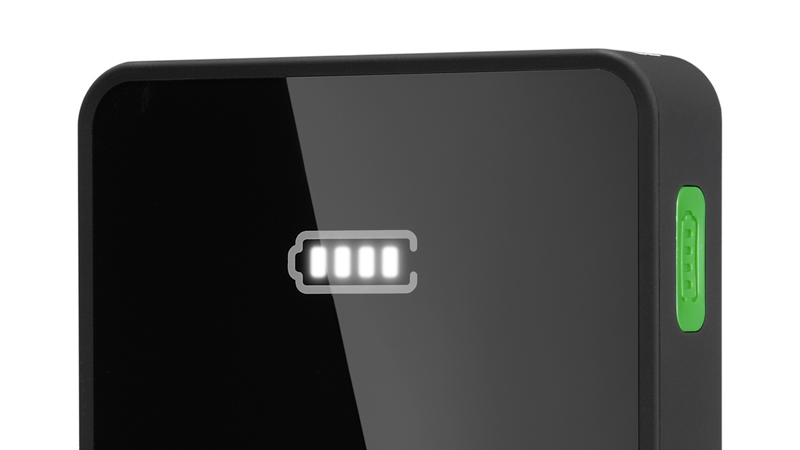 The APC is a simple device. Far from a criticism, this power bank does one job and it does it well: keeping your phone or tablet going all day away from the mains. It doesn’t have much in the way of high-end features, and its capacity-pound ratio is a lot lower than some of its rivals, but at £24 we think the M5 is a nice-looking, easily portable power bank that’s well worth considering.

The M5 from APC is a dual-output power bank with a fast-charging 2.4A (12W) USB port that’s ideal for charging your tablet, and a second 1A (5W) output suited to smartphones. Don’t expect a full charge for each, though: with 5000mAh of capacity, you can expect at least 3500mAh to be available to your devices (some of this energy is lost through heat generated and voltage conversion). Also see: How to charge your phone or tablet faster

How many times the M5 will charge your device depends on the capacity of its own battery; you’ll likely get two charges for an iPhone, although high-end Android phones typically have higher-capacity batteries, and iPads and Android tablets much more so.

It’s worth noting that 12W fast-charging is available only with one device connected. The APC M5 power bank has a max total output of 2.4A (12W), which means with two devices connected this faster output will be able to perform at only 1.4A (7W), assuming the second ouput is performing at its full 1A (5W).

Even so, being able to simultanously charge two devices is a boon, and especially when you’re using a device that’s as slim and light as your smartphone. With half the capacity onboard, the APC is half the weight of and much thinner than the similarly priced Intocircuit Power Castle, although not significantly smaller.

For many users that power bank is overkill for daily use; closer competition for the APC M5 are the 6000mAh Zendure A2, EC Tech 6000mAh power bank, and 5200mAh Tylt Energi 5K+. This APC is a far better deal than those latter two power banks, even at twice the price of the EC Tech (this M5 costs £24 from Amazon), but the £33 Zendure offers a more durable build and better features.

But this APC looks good, and for many people that may swing their decision over the Zendure. Available in black or white, its gloss front- and rear panels remind us a little of Sony’s Xperia line-up. It’s prone to fingerprints, though, and it’s a shame no carry case is supplied to protect it on the move.

On the APC’s front a four-LED battery symbol shows you how much power remains, while a green button on the side is used to check the remaining capacity or begin charging. Unlike many such power banks this one does not include an LED flashlight.

There’s nothing here in the way of passthrough charging, auto-on/-off functionality or other advanced features, although the company does claim over-charging, -discharge and -temperature protection for its M5 power bank.

The APC Mobile Power Pack is also available as the M10 with 10000mAh capacity, which costs £36 from Amazon.