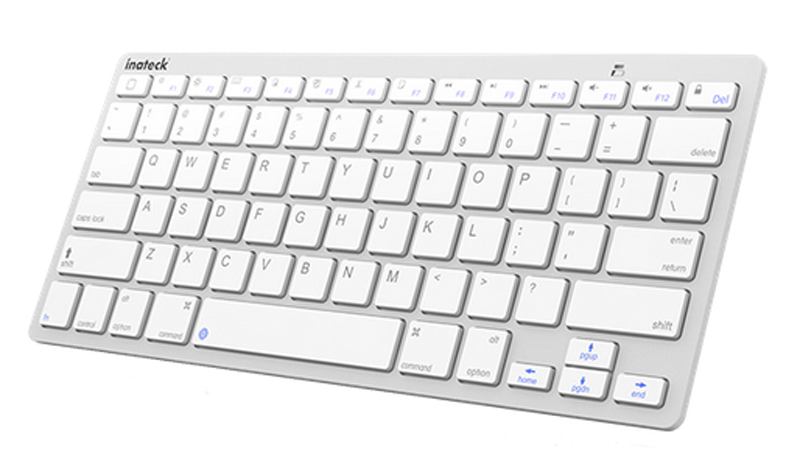 Inateck’s BK1002E might not be the most portable iPad keyboard you can buy, but it’s great for desktop use, letting you get work done just as easily as if you were sitting at a laptop. It’s understandably cheaper looking in its design than Apple’s own Wireless Keyboard, but at around a quarter of the price we know which one we’d buy.

Inateck’s BK1002E in essence turns your iPad into a laptop, offering a desktop keyboard for more comfortable typing. It’s a great productivity tool if you’re using your iPad at your desk. Read our Inateck BK1002E Bluetooth keyboard review. See all keyboard reviews.

iPads are great for browsing the web, checking your email and enjoying multimedia, but their touchscreen keyboards mean they aren’t so great for getting work done. Inateck’s BK1002E in essence turns your iPad into a MacBook, offering a desktop QWERTY keyboard for more comfortable typing. It’s a great productivity tool if you’re using your iPad at your desk, and even more useful now that Microsoft Office is free for the iPad.

The Inateck is less practical if you’re using your iPad on the road. It might be smaller than most desktop keyboards, but at 285x120x6-20mm it’s longer than both the 240mm iPad Air 2 and 200mm iPad mini 3, and nearly as heavy, at 340g. It looks small because it lacks a numberpad, but in reality this Inateck is no more compact than most Apple Mac keyboards (in fact, it works just fine with our iMac, and also supports Windows and Android) and the keys are very comfortably spaced.

Very similar in design to Apple’s own £59 Wireless Keyboard, yet significantly cheaper at £16.99 from Amazon, the Inateck uses flat white chiclet tiles, which it floats not on aluminium but on a silver-painted plastic chassis. It, too, is raised at the rear by it’s battery compartment (2x AAA batteries are not supplied, but should last up to 60 days), creating a comfortable typing angle from 6- to 20mm.

The legends are not as precise as on Apple’s keyboard, and you can both see and feel the glue that adheres them to the keys, but at this price the Inateck is a reasonably stylish-looking alternative to Apple’s costly keyboard, and it’s also pretty quiet in use. Inateck claims it’s dust-repellant, too.

Although the legends look a little different, save from the top row the button sizing and placement almost exactly matches that of Apple’s keyboard. You’ll find a Home button rather than Escape at top-left, allowing you to exit an app, bring up recent apps or call up Siri. Above the Delete key at the top right corner is a second Del key; long-pressing this brings up the ‘Slide to power off’ option. The spacebar can also toggle between the the English (UK) and Emoji keyboards.

F3 is used to toggle on and off the onscreen keyboard, F4 through F7 are used to copy, paste, cut and select all, and the media buttons have been moved on one position to F8 through F10 (we’ve lost the mute button to accomodate this). It’s all fairly easy to get used to, and our only real gripe is its US keyboard layout and the existence of the US $ key where we’d like to see a UK £ button.