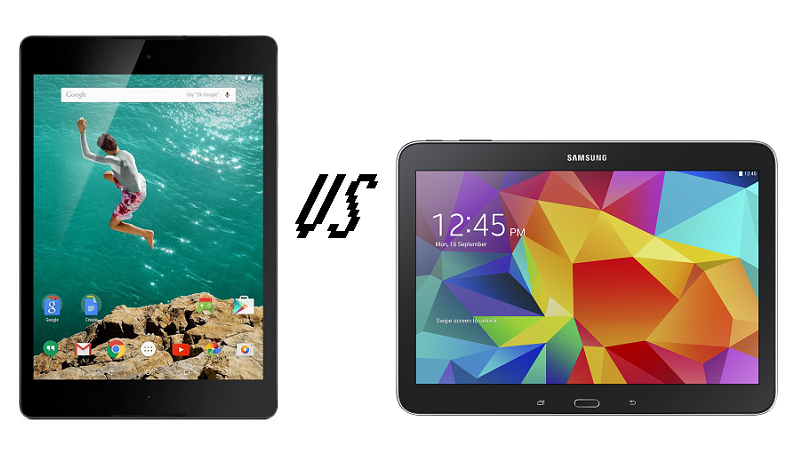 The Galaxy Tab 4 10.1 might be cheaper but the newer Nexus 9 outclasses it in almost every area. This is understandable because it’s newer so if you can jump the price gap, you’ll be much better off with Google’s flagship tablet.

Google’s Nexus 9 (made by HTC) is the newest tablet out of these two and comes in at a higher price of £319 – matching other rivals like the iPad mini 3. The Galaxy Tab 4 10.1 is more budget friendly at £279 and since it has been on the market for a number of months, it’s come down it price. At the time of writing, you can get it for around £230 at retailers like Amazon.

The Galaxy Tab 4 is a little old but we’ve also compared the Nexus 9 with the excellent Galaxy Tab S 8.4.

With a bigger screen, it’s of little surprise that the Galaxy Tab 4 10.1 is the heavier tablet here. It’s 487 g compared to the Nexus 9’s 425 g. Interestingly they are both 8 mm thick and use plastic rear covers.

The Nexus 9 has a brushed metal frame running around the edge and comes in three colours: midnight blue, lunar white and sand. Meanwhile, the Galaxy Tab 4 10.1 comes in white or black.

If it matters you your decision, the Galaxy Tab 4 is really a landscape tablet due its aspect ratio (see below) while the Nexus 9 is mostly a portrait device but works perfectly well in either orientation. See also: Nexus 7 vs Nexus 9 comparison.

As we’ve mentioned Samsung uses a larger screen on the Galaxy Tab 4 10.1. It doesn’t take much to work out that it’s 10.1in which is the classic size for a big tablet. The Nexus 9 has a more unusual 8.9in screen so there’s about an inch of difference. A key variance apart from the size is that Samsung uses 16:10 aspect ratio Google has followed Apple’s lead with 4:3.

The Nexus 9 is one of the first devices with an Nvidia Tegra K1, a 64-bit chip listed at 2.3 GHz but shown to be running at 2.5GHz in GeekBench 3. Google has opted for 2GB of RAM to run alongside it.

It’s understandable that the older Galaxy Tab 4 10.1 is using a less impressive Qualcomm Snapdragon 400 processor which is 1.2 GHz quad-core and has 1.5 GB of RAM backing it up.

If you’re looking for the speedier and more future proofed tablet, it’s the Nexus 9 in this comparison.

In terms of internal storage, the Nexys 9 wins with a choice between 16- and 32 GB capacities. Although the Galaxy Tab 4 10.1 only has 16 GB, Samsung offers a microSD card slot so you can add more storage which is something Google does not with its tablet.

It’s no surprise to see 11ac dual-band Wi-Fi on the Nexus 9 and it also has NFC, GPS and Bluetooth 4.1 with aptX. The Tab 4 also has GPS is on older Bluetooth 4.0, doesn’t have NFC and is limited to 802.11b/g/n dual-band Wi-Fi.  Its advantage is an IR blaster which can be used for controlling other devices like TVs.

Both offer front facing stereo speakers which is good to see. You can also buy a 4G LTE model of each if you want mobile data alongside Wi-Fi.

A key advantage of the Nexus 9 is that is comes with stock  Android 5.0 Lollipop which is the latest version of Google’s operating system. It has launched along the  Nexus 6 smartphone with a new Material Design interface.

Lollipop runs smoothly on the Nexus 9 and plenty of handy new features. We’re impressed and you can read more in our full review and Top 10 Android Lollipop tips, tricks and hidden features.

As with any Samsung tablet, the Galaxy Tab 4 10.1 uses the firm’s own TouchWiz user interface which in this case is running on Android 4.4 KitKat. It’s unclear whether the tablet will be updated to Android L in the future.

On the plus side are features such as Multi-Windows which allows you to run two apps side-by-side and SideSync which provides extra functionality when paired with a smartphone. However, the Nexus 9 is better in this area we feel with the newer OS.