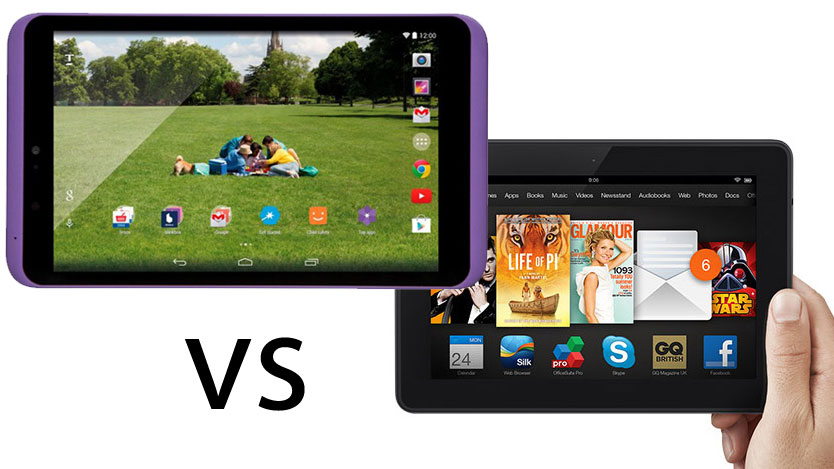 The Hudl 2 is the clear winner here. It’s much cheaper (unless you find the Fire HDX on offer) and has a rear camera and expandable storage. The killer, though, is that it runs plain Android and gives you access to Googles apps and services including Google Play. 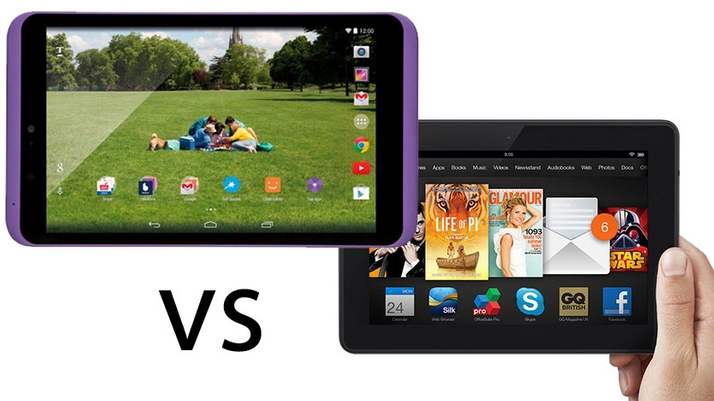 Here we compare Amazon and Tesco tablets – Hudl 2 vs Kindle Fire HDX – explaining where and how they differ and how you should spend your money.

The Hudl 2, reviewed is Tesco’s second tablet and costs £129, just £10 more than the original Hudl. Because there’s only one model, there’s no choice of Wi-Fi or Wi-Fi and 3G/4G, so if you need data on the move, the Fire HDX could be a better choice.

With the Fire HDX there are options which take the price from £199 to £329 depending on whether you want 16GB, 32GB or 64GB of storage, Wi-Fi only or Wi-Fi plus cellular data.

The Fire HDX is an update of the older Fire HD. It has a 7in screen which is lit by blue – not the usual white – LEDs. This gives ‘perfect’ colour accuracy according to Amazon, and it really does look great.

The base 16GB model costs £199 and the only way to get more is to specify more when ordering. You can also choose not to see ‘special offers’ on the lock screen if you hand over an extra £10.

Unlike the older Fire HD, the Fire HDX has a front camera which means you can Skype and take selfies. There’s no rear camera, though.

We quite like the HDX’s rear-mounted power and volume buttons as once you’re used to them, they’re easy to find without looking. The rear-facing stereo speakers are pretty good, but we’re not fans of the angled microUSB connector which makes the cable point slightly upwards when charging, and it would be easy to lean on this and damage either the tablet or the cable.

The Hudl 2 has a larger 8.3in screen with the same 1920×1200 resolution (that’s a 16:10 aspect ratio rather than typical 16:9). It’s an IPS panel: not the brightest and without the level of colour accuracy of the Fire HDX, but a great screen considering the price. 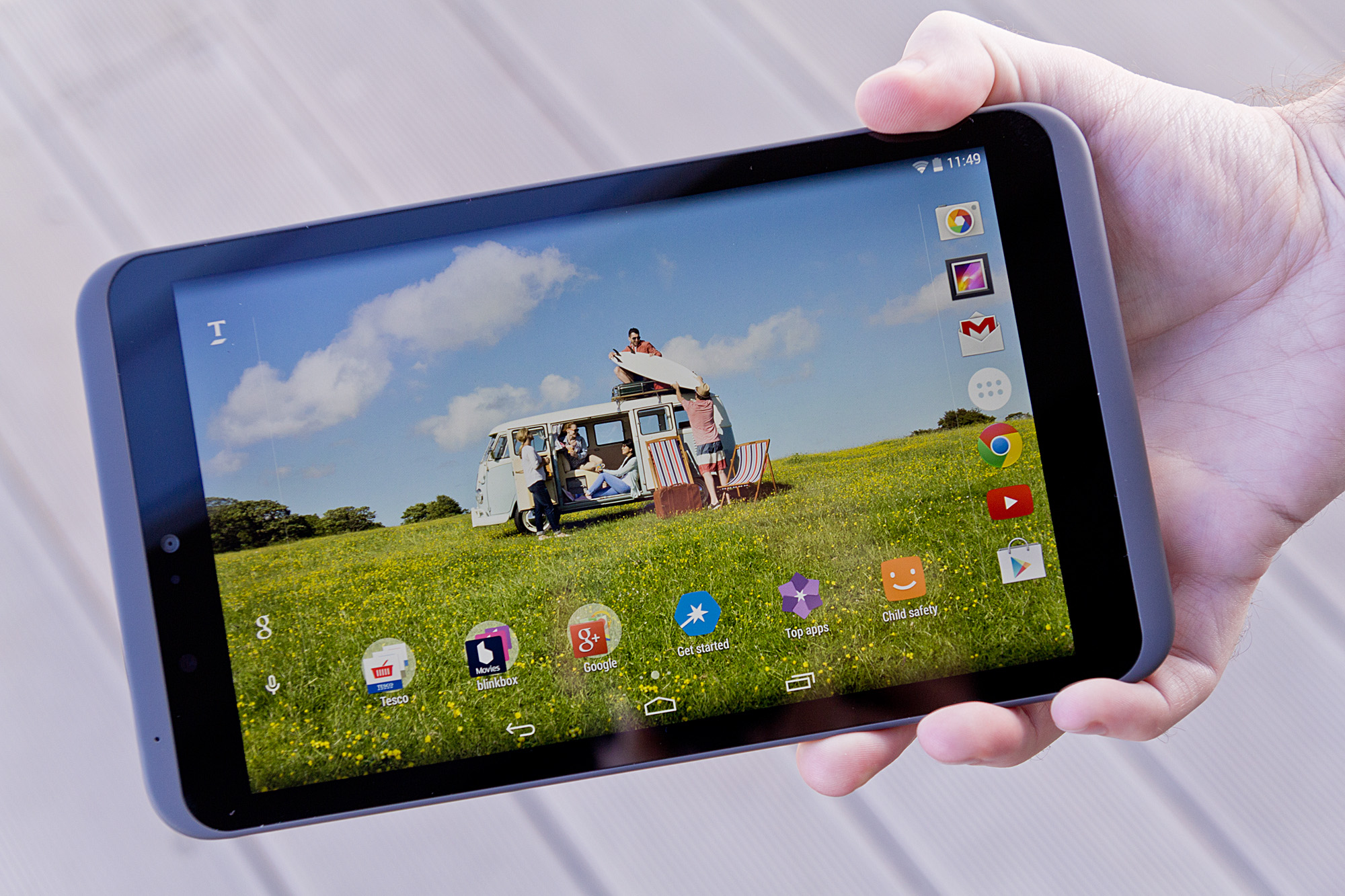 Storage is fixed at 16GB, but you can add a microSD card for more, up to 64GB.

You get rear-facing stereo speakers, a choice of rear colours and both front (1.2Mp) and rear (5Mp) cameras.

The Hudl 2 also has a GPS receiver and a micro HDMI output, two features the HDX lacks. 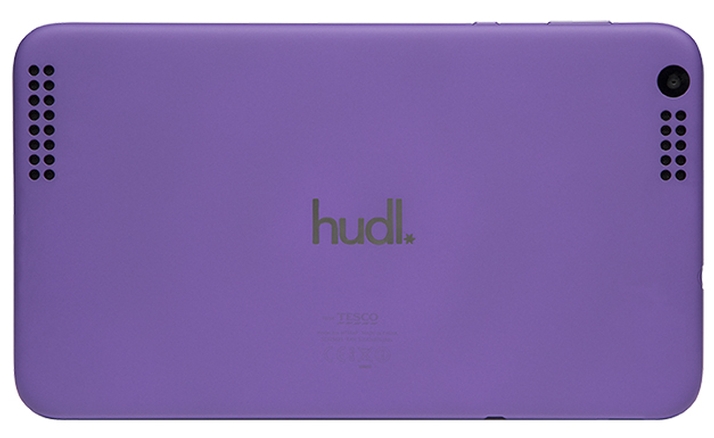 The Hudl 2 runs Android KitKat, and Tesco hasn’t changed it much – a good thing. Yes, there’s a prominent link on the home screen to Tesco’s services, which becomes a full-screen ‘advert’ if you swipe to the right, but it’s not obtrusive and you won’t feel like you’re constantly being sold to as you are with the Fire HDX with Special Offers.

Since it’s basically vanilla Android, it’s an easy tablet to use and you’ve access to all of Google’s apps and services including the Play Store, YouTube, Gmail, Maps and more.

The Fire HDX offers none of these, as Amazon wants you to use its apps and services instead. Fair enough. If you have a lot of Kindle ebooks, the HDX might seem the obvious choice, but don’t forget that you can install the Android version of the Kindle app on the Hudl.

Plus, as we discovered when trying to read a book on the HDX, the blue LEDs give a faint blue glow around the edges of the screen which is both distracting and slightly offputting.

Amazon’s Fire OS is easy to use, though, and has full integration – just as you’d expect – with all of Amazon’s services. There’s the Appstore, Prime Instant Video, Books, Music, Audiobooks and Games. You can also view photos synched from other devices (or the Fire itself) via Amazon Cloud Drive.

A unique feature is Amazon’s Mayday service that lets you chat almost instantly with a tech support person right on the device. If you’re having problems or just need a bit of help getting to know the Fire HDX, you can tap the button any time, day or night, and speak to someone.

Tesco quotes up to 8 hours between charges, Amazon says you’ll see up to 11 hours from the Fire HDX. In reality, battery life will depend on how you use your tablet. Playing games non-stop will reduce that figure considerably, but if you’re just watching videos offline, you will probably get the claimed numbers. Streaming over Wi-Fi will knock a couple of hours off.

Both are quick tablets, with the Hudl using a quad-core Intel Atom chip, and the HDX an even quicker (on paper) quad-core processor. Both have 2GB of RAM.

If you’re considering both tablets as gifts for children, then both offer good parental controls. The HDX has Amazon’s FreeTime app which locks kids in so they can access only the stuff you want them to see, and doesn’t let them use the web browser.

Tesco’s controls are also good, and include a child-safe web browser in which you can dictate which sites they can access. They can request access to sites not on your list, which you can approve or decline. You can also choose which apps they can use, and how long they can use the tablet each weekday or weekend.

Amazon’s system goes slightly further and lets you set separate time limits for reading and everything else.

With both tablets you’ll want to invest in a case to help prevent damage from knocks and drops: Tesco’s Protective Bumper comes in pink or blue and costs £15.

Amazon doesn’t have an equivalent, and the two official cases at £45 and £55 are overpriced compared to the unbranded versions you can buy for a few pounds from Amazon or ebay.

The HDX is already a year old, and is now seeing frequent price drops so it’s unwise to pay the full price if you can wait. However, the Hudl 2 is the clear winner here, and the reasons are obvious.

First, it runs Android. No matter which way you look at it, it’s better to have access to Google Play than the Amazon Appstore. The latter still lacks apps you might expect to be there, such as Dropbox and 4oD. It’s also frustrating not to be able to use the official Google apps too.

Next, the Hudl 2 has expandable storage, which is cheaper than buying a higher-capacity Fire HDX. It also has a rear camera, which comes in handy on occasion (and kids love).

Screen size is a personal preference, so the smaller HDX might win for you, but we prefer the 8.3in size which makes web browsing more comfortable.

Finally there’s the glaring issue of price. The Fire HDX is Amazon’s premium 7in tablet (the Fire HD 7 is the new ‘cheap’ version) but it really doesn’t offer enough to justify the price difference. The cheapest LTE version is £269. For £70 extra you can have an iPad mini 2 with cellular.

Assuming you don’t need mobile data, the Hudl 2 is the tablet to buy.