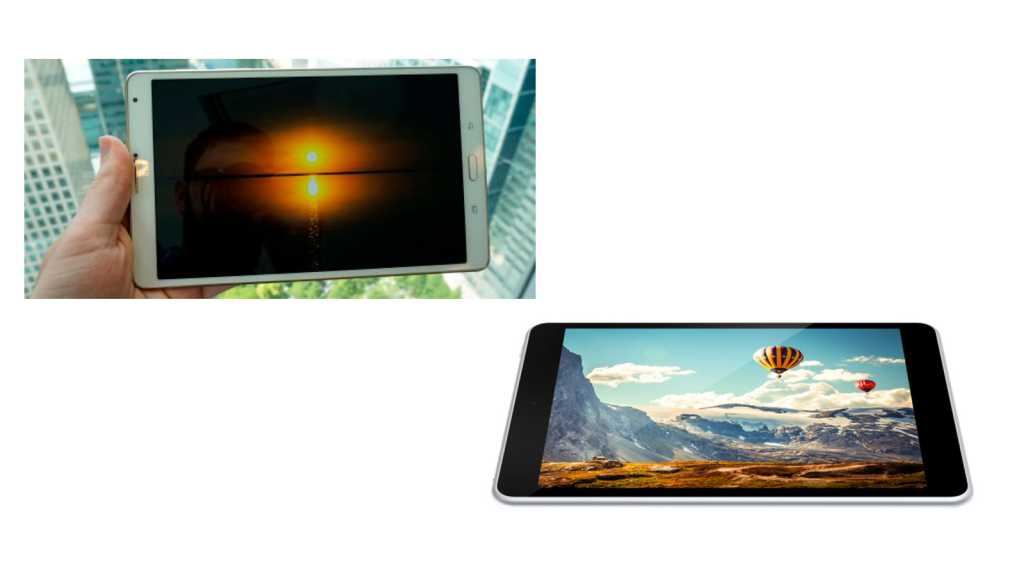 It’s impossible to be sure before the Nokia N1 launches and we get to grips with it in our lab, but from the specs we would say that it is a worthy challenger to the Tab S 8.4. The Samsung Tab is powerful, fully featured, and well priced. If you want cellular connectivity and expandable storage, it is the only choice. But the Nokia N1 may be a cheaper option. 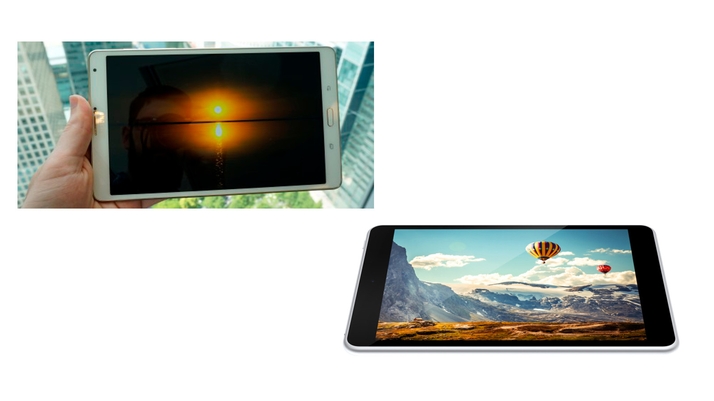 Nokia has made its post-Microsoft bow with an Android tablet called the Nokia N1. We compared Nokia’s upcoming tablet with the Samsung Galaxy Tab 8.4: one of the best Android tabs you can buy. (See also:  The best tablets of 2014.)

Right now the Samsung is the only game in town. But it is likely the Nokia N1 will be cheaper – when we do get it.

Nokia’s N1 is a small tablet, with a 7.9in display that has a 4:3 aspect ratio, surrounded by slim bezels. It’s thin, at 6.9mm, and light (318g). You can comfortably hold the Nokia N1 in a single hand.  The Galaxy Tab S 8.4 just 6.6mm thick according to Samsung. For its size, it’s also staggeringly light; just 294g which makes it also easy to hold one-handed. Indeed, the Nokia can’t beat the Samsung for thin and light.

The Nokia N1 is a good looker, though: a unibody sandblasted aluminium chassis, with a zero air gap laminated display. Nokia’s N1 is available in either natural aluminium or lava grey. Stereo speakers are built in: twin 0.5W speakers visible on the bottom edge of the device.

Samsung is yet to change its familiar design so the Galaxy Tab S 8.4 looks much like the firm’s other tablets. It takes some style advice from the Galaxy S5 with the dimpled rear cover and set of three off-screen buttons – one of which, as usual, is physical.

Like the Nokia N1 the Galaxy Tab S comes in two colours: ‘Dazzling White’ and ‘Titanium Bronze’. The former has a white rear cover and front bezel while the latter is grey/silver in those places. Both have a copper/gold colour edge and detailing.

Those two odd looking circles on the back of the Tab S 8.4 are for attaching a case – Samsung has gone for this method instead of magnets or a simple clip over. The Samsung Book Cover is available in different colours and, although it’s a little tricky to use, won’t come off easily. It protects the screen during travel and also allows you to tilt the tablet into various different viewing positions. The downside is that it costs a whopping £45. (See also: 13 best budget tablet UK.)

The Nokia N1 is fitted with a 7.9in IPS panel, which offers sharp images, vibrant colours and good viewing angles. A 2048×1536 native resolution offers an excellent pixel density of 324ppi.

The Galaxy Tab S has an 8.4in dispay with a 16:10 aspect ratio. A whopping 2560 x 1600 (WQVGA) resolution on an 8.4in screen means an impressively high pixel density of 359ppi making it the highest we’ve seen on a tablet. As you might expect, the display is amazingly crisp and clear.

Samsung’s AMOLED technology isn’t to everyone’s taste. The punchy colours can be a little over the top making things look oversaturated and in your face so it’s understandable if you would prefer a more natural, laid back display. Fortunately, you can adjust the screen mode. By default it’s on adaptive display which adjusts the display’s gamma, saturation and sharpness depending on the content, but there’s also AMOLED cinema, AMOLED phot and basic. The latter provides a more muted look and feel.

We haven’t yet spent any time with the Nokia N1’s display, but it will have to go some to be better than that of the Galaxy tab S 8.4.

The Nokia N1 has a 2.3GHz 64-bit quad-core chip and 2GB of RAM: the processor in this case being an Intel Atom Z3580. Until we’ve got the Nokia N1 into our lab we can’t properly assess its performance.

The tablet has a very healthy 3GB of RAM which is partnered by Samsung’s own Exynos 5 Octa-core processor – it has four 1.9GHz cores and four 1.3GHz cores.

With the same core line-up as the larger model, we didn’t need to hold the front page as benchmark results were identical or only a few points off. We recorded 2765 in GeekBench 3, 14fps in the GFXBench T-Rex test, 3fps in the harder Manhattan test and 1089ms in SunSpider.

From a user perspective, the Galaxy Tab S 8.4 provides smooth performance. However, perhaps not quite as good as the spec sheet suggests. We have found, like with the Tab S 10.5, occasional lag – sometimes just switching the screen on, or opening an app. Luckily, these lulls of speed were pretty rare so we can safely say that overall the performance is satisfactory.  (See also: The 26 best Android tablets of 2014.)

The Nokia N1 offers dual-band 802.11ac Wi-Fi with MIMO and Bluetooth 4.0. There is no cellular option.

The Wi-Fi models are in essence even – but if you want to use your SIM, you need to use Samsung.

The Nokia N1 comes with 32GB of onboard storage as standard, but doesn’t feature a microSD slot for adding more.

Not so with the Galaxy Tab S 8.4. Storage is a fairly standard 16- or 32GB internally (although we can’t find the higher capacity on sale yet) and Samsung, as usual, offers a microSD card slot which can accept up to 128GB cards. We call that a win for Samsung.

Nokia claims the N1 will last 9 hours, and it comes with a 5300mAh battery.

The Galaxy Tab S 8.4’s 4900mAh non-removable battery holds its charge well when not being used (on standby/sleep). In terms of video playback, you’ll get a decent performance of around or nine hours on average (mainly depending on screen brightness). Samsung claims 12 hours of video and 10 hours of web browsing over Wi-Fi.

We’re still not convinced that snapping photos on a tablet will ever truly take off, but if it does it will happen first with smaller tablets such as the N1. So it makes sense that the N1 has a decent camera spec.

It features an 8Mp rear camera capable of 1080p video, and around the front the Nokia N1 has a 5Mp selfie camera.

Photographers will be pleased to hear that the the Galaxy Tab S 8.4 also has an 8Mp rear facing camera with an LED flash and a 2.1Mp front facing camera.

It is impossible to say for sure before we test them both together, but the Nokia’s camera has the marginally better spec.

The Nokia N1 runs Android Lollipop, to which Nokia adds its Z Launcher. You can switch this off if you prefer.

Z Launcher is unlike other launchers in that it strips back Android to reveal only the basics, such as the time, date, an upcoming calendar event, a few apps, web pages and contacts – it will learn to display those you use most frequently. At the bottom are shortcuts to the dialler, Hangouts, Google Maps, Chrome and the apps menu.

Z Launcher also features Scribble, which lets you scribble letters on the launcher to quickly open an app – for example, T for Twitter.

The Galaxy Tab S 8.4 is running Android 4.4.2 KitKat with Samsung’s latest TouchWiz interface pre-installed. The interface mirrors that of the Galaxy S5 with the firm’s own icons, widgets and drop down notification bar etc.

There are good and bad things about TouchWiz although these will somewhat come down to personal taste and how you use the device.

We like the ability to run two apps side-by-side on the tablet and you can access this feature (Multi-window) by swiping in from the right side of the screen so it’s easily accessible at any time. There’s also the way the recent apps menu pops up from the bottom of the screen without using the entire display, which on tablets is pretty unnecessary.

The notification bar is also packed with helpful elements including quick settings for lots of, er, settings and sliders for both screen brightness and volume. SideSync 3.0 is also handy for controlling a smartphone (calls and texts etc) from the tablet but it has to be a compatible Samsung handset.

Our main quibble is with Magazine UX which sits to the left of the main homescreen panel. It works a bit like HTC’s BlinkFeed providing content tailored to what you’re interested in. It also has a section for organisation such as a calendar and email but these only provide info if you use the built-in apps, not Google’s.

That’s fine if you use that kind of feature but Samsung doesn’t allow the interface to be removed, one panel must remain so at best, you’ll have to ignore it exists.

It’s impossible to be sure before the Nokia N1 launches and we get to grips with it in our lab, but from the specs we would say that it is a worthy challenger to the Tab S 8.4. The Samsung Tab is powerful, fully featured, and well priced. If you want cellular connectivity and expandable storage, it is the only choice. But the Nokia N1 may be a cheaper option. See also: Best tablets