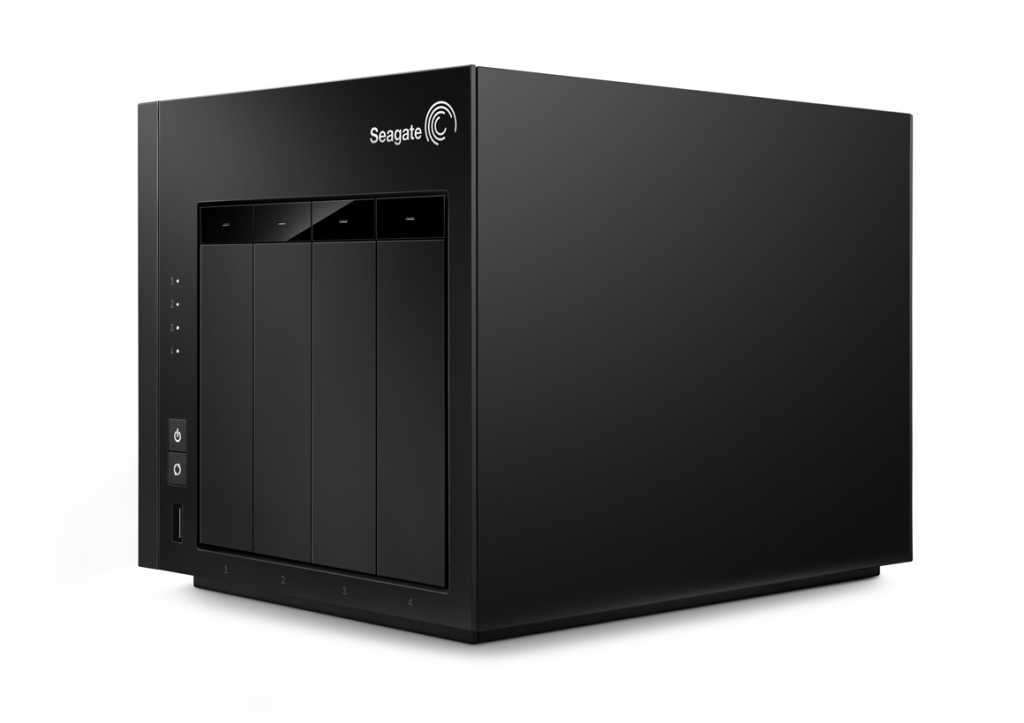 The Seagate NAS 4-Bay is a handy self-contained storage solution, with one of the world’s few remaining disk manufacturers putting its disks into a working network-attached storage basket. Mac users would be advised to walk away, while Windows users may find this solution more usable, if still too slow for comfort, given its advertised target user of business or power user. Given the empty chassis’ value at around £250, you can get more for your money by sourcing a NAS unit from a specialist like QNAP or Synology, and still keep the budget under £300 before you invest in disks. 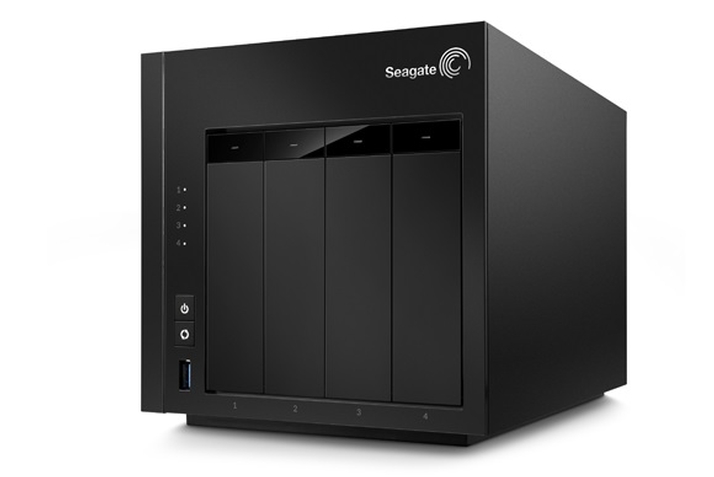 A complete network storage solution and private cloud for power users – that’s how Seagate ambitiously bills its latest 4-bay NAS drive. It goes on to promote it as the same complete solution for businesses with up to 25 employees.

When we last tested a Seagate NAS drive, it was almost as generically named, known as the Seagate Business Storage 4-Bay NAS. That model has been removed from the range, leaving just the near-identical Seagate NAS 4-Bay. (Read all  NAS drive reviews.)

The industrial design of this near-cubic black box is even sleeker than before, in all black finish with notably sharp corners and similarly square detailing. It’s Windows 8 gone all noir, which we found here to make a not entirely unattractive overall impression. The light-sinking blackness is provided some relief by a line of brilliant white LEDs on the fascia, including four that flicker for individual disk activity.

Construction is all plastic – front, sides and back. This NAS box follows the usual approach of front-loaded hard disks, these mounted in individual caddies which are removed by pulling on small lever tabs at the top.

Two gigabit ethernet ports are included at the back, as well as a single USB 3.0 port and large integral cooling fan of 120 mm diameter. There’s another USB 3.0 port at the front of the box too. The second network port is more of a backup option though, since the unit is too underpowered to undertake any link aggregation of two gigabit lines to enhance performance.

Powering the Seagate NAS 4-Bay is a 1.2 GHz ARM processor, a single-core Marvell ARMADA 370/XP. That may be a step up from the rather pedestrian 700 MHz Cavium Econa CNS3420 dual-core ARM we found in its predecessor. Besides a higher aggregate clock, the Marvell has a slightly later ARMv7 architecture, against the Cavium’s ARMv6. Memory is also expanded, from the Business NAS’ paltry 256 MB to a still rather limited 512 MB DDR3 RAM. (See also:  Best NAS drives.)

This Seagate NAS 4-Bay is running a new version of the company’s Linux operating system, now up to NAS OS 4.0. This offers a trendy Windows 8/iOS 7-style interface, quite sparse-looking and with thin-weighted sans-serif typography and upper-case text.

Main options are listed textually down the left-hand side of the interface, and clicking a selection here brings up the relevant controls in the main pane on the right. Beside the usual SMB and AFP file services (both on by default) there are software servers for (S)FTP, UPnP/DLNA and Time Machine, among others. Fine-grained control over some features is missing as far as we could tell; for example, limit on space available for Mac backups through Time Machine.

Overall we’d place the complexity/ease of use as somewhere between the simplicity of WD’s latest network applicances, and the fully featured Synology DSM interface. Playing catch-up with the established NAS brands, Seagate is trying to build up a marketplace of apps that can be installed to expand the unit’s capabilities. At present you’ll find apps such as WordPress and BitTorrent Sync, but nothing too compelling here at present.

We tested the Seagate NAS 4-Bay with four 4 TB Seagate NAS SATA disks pre-loaded inside. Windows and OS X computers were used, and both SMB and AFP filing protocols. The NAS was tested with its default SimplyRAID configuration, which gives one-disk fault tolerance on a four-disk array, just the same as RAID 5.

Despite the faster-looking processor, we found this Seagate NAS 4-Bay to be about as slow as its predecessor, the Seagate Business Storage 4-Bay.

Tested in Windows with the easy ATTO Disk Benchmark test, the software indicated read speeds up to around 110 MB/s and write speeds to 55 MB/s, which are good results although this test has the least correspondence with real-world performance. CrystalDiskMark showed a maximum sequential write speed figure of 52 MB/s. The sequential read speed here was only 64 MB/s, although this sequential read test in CDM should not be trusted when testing network storage.

The slowness issue was most apparent when connecting to a Mac via AFP. And by default, we found that only the AFP service is broadcast over Bonjour, so that is the way that most Mac users will connect this drive. Best performance with ‘large’ (2-10 MB) files tested in QuickBench showed average speeds of 109 MB/s reads but just 21 MB/s writes. When tested with the ‘extended’ dataset (20-100 MB), which usually returns best possible results, write speeds rose slightly to 29 MB/s; but read speeds also tumbled to just 62 MB/s when averaged.

Most troubling was the small-file transfer speeds though. Whether using sequential or random-access tests, the Seagate NAS returned figures of 45 MB/s for reads, and 2 MB/s for writes (averaged with 4 kB to 1024 kB files). Looking specifically at 4 kB data, write speeds dawdled at just 0.06 MB/s, or 60 kB per second. In a potential real-world scenario of copying a large number of Word text documents to the drive, each sized at 32 kB, the write speed was found to be only 0.5 MB/s.

At that speed, assuming you wanted to fill the 12 TB available space just with 32 kB text files, with the drive working at its top speed it would take over 9 months to copy all your files across to it. That should give pregnant pause for thought. File writing performance using SMB in OS X was somewhat better for small file transfers. Here we recorded average reads at 25 MB/s and writes 19 MB/s.

Focusing just on 4 kB transfers, these measured 4.6 MB/s for sequential writes, and 2.6 MB/s random writes. And by the time file size was up to 32 kB, write speed also hit 23 MB/s for either sequential or random. So in the same notional attempt to filelthe Seagate NAS drive with 32 kB text files, it would now take only six days of continuous copying time. Maximum sequential read/writes were reduced with this SMB connection though. Write speeds were still limited to 23 MB/s even with large files; and sequential read speeds could not exceed just 45 MB/s. In use the Seagate proved quite miserly in its overall power consumption, not exceeding 31 W even under load. (See also:  Best NAS drives.) 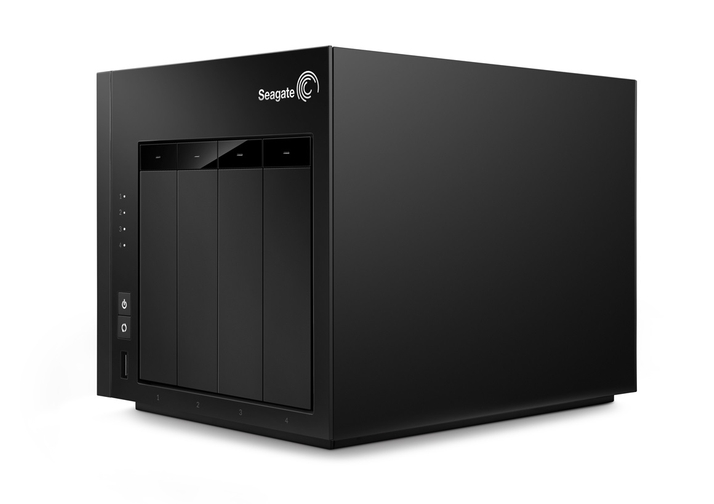