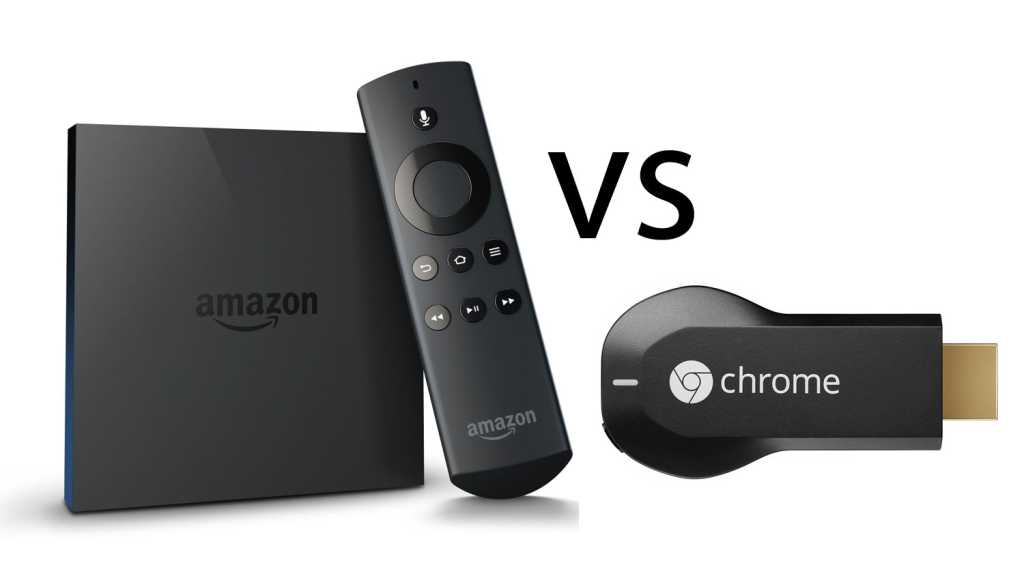 Both devices are good in their own ways. They’re aimed at different people and if you’ve already bought content from Google, it could make sense to get a Chromecast. Likewise, those with other Amazon devices and subscriptions (particularly Prime) would be best off with the Fire TV. Both the Fire TV and Chromecast limit what you can watch online, and are roughly equal when it comes to UK-specific content.

Google’s Chromecast caused a mini storm in the media streamer world when it was announced earlier this year. The inexpensive HDMI ‘stick’ works quite differently to the Amazon Fire TV set-top box, so here we explain which is best in our Chromecast vs Fire TV comparison.

The Chromecast costs £30, but can be found online for as low as £15. If you buy one from Google, you’ll get 90 days of free access to Google Unlimited Music. See our music streaming services comparison

Amazon charges £79 for the Fire TV, which doesn’t include a Prime subscription – that costs either £5.99 per month if you want only the video service, or £79 per year if you also want one-day delivery on Amazon Prime goods, plus Kindle benefits such as the Lending Library and a free book each month.

Amazon’s Fire TV is a small set-top box, much like the Apple TV. It comes with a remote which you can use for voice searches instead of trying to use an on-screen keyboard. Optionally, there’s a Bluetooth gaming controller for playing a variety of games from the Amazon Appstore, although for some you can use the bundled controller.

The Fire TV connects via an HDMI cable (which isn’t included in the box), and requires a separate power supply.

The Chromecast looks like an over-sized USB flash drive, but plugs into one of your TV’s HDMI inputs. It still requires power, but many modern TVs have a handy USB port which can be used for this.

It relies on another device to control it and act as a remote. This could be an Android smartphone or tablet, an iPhone or iPad, or a PC or laptop. For the most part, the remote control device simply begins the video stream, rather than beaming a video to the Chromecast. With certain apps, though, you can do this or display photos and videos directly from a phone or tablet.

Although the Fire TV can be used with an Amazon Prime Video subscription to watch movies and TV from that streaming service, it’s not necessary. You could, for example, use a Fire TV to watch BBC iPlayer and YouTube and never use Amazon’s services. It wouldn’t make a huge amount of sense, though.

As well as Amazon Prime Instant Video, you’ve access to a huge range of on-demand films and TV shows which you can rent or buy. This is exactly how it works with iTunes content on the Apple TV.

The Fire TV comes with certain apps pre-installed for Netflix, iPlayer, Demand 5, Vimeo, Sky News, Spotify, Flixter and more, but you can install from the somewhat limited selection on the Appstore. You can’t watch Blinkbox or movies from Sky NOW, and there’s no access to Google Play Movies and TV. You can search for Fire TV apps and games on Amazon’s website.

It’s also similar on the Chromecast, which lets you watch Netflix, YouTube, Blinkbox Movies, NOW TV, BT Sport, Google Play Movies & TV and more. There are omissions, though, such as 4oD and – of course – Amazon Instant Video. You can search for Chromecast apps here

Chromecast vs Fire TV comparison: Which is best?

As we’ve said, the two devices are quite different even though they’re both video streamers. The Chromecast is inexpensive, but requires you to have a compatible device to control it. Realistically, that should be a smartphone or tablet rather than a PC or laptop, since a handheld touchscreen device is much better suited to being a remote.

There still aren’t as many apps with Chromecast support as we’d thought there would be by now, which is a bit of a problem if you want the full range of UK catch-up TV.

If you want to play your own collection of videos, both devices support the Plex app, but here the Fire TV is your best bet as it’s way more powerful than the Chromecast and won’t have any problems with large media libraries.

If you want to watch content you’ve bought or rented from Google or Amazon, then you’ll need to use the respective hardware as neither offers access to its rival’s content.

Currently, the array of games on offer via the Fire TV is small, and some are really suitable as they’re designed for touchscreens, so don’t be persuaded that it will double as a games console just yet.