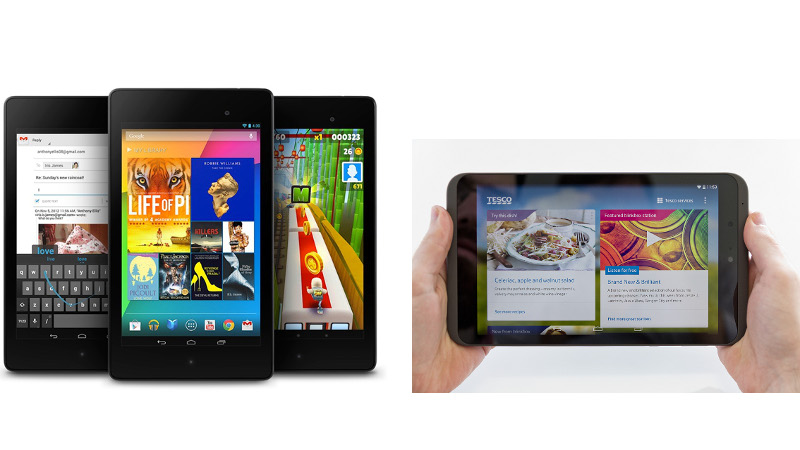 Let’s be straight on this: the only reason not to choose the Hudl 2 over the Nexus 7 is if you are opposed to Tesco holding anonymous data on your online actions. And even then you can just switch off the Tesco services. The Nexus 7 is better looking and slimmer, but in all other respects the Hudl 2 is simply better or a match for its rival. And it is much more easy to get hold of. The Tesco Hudl 2 is the best cheap tablet you can buy. 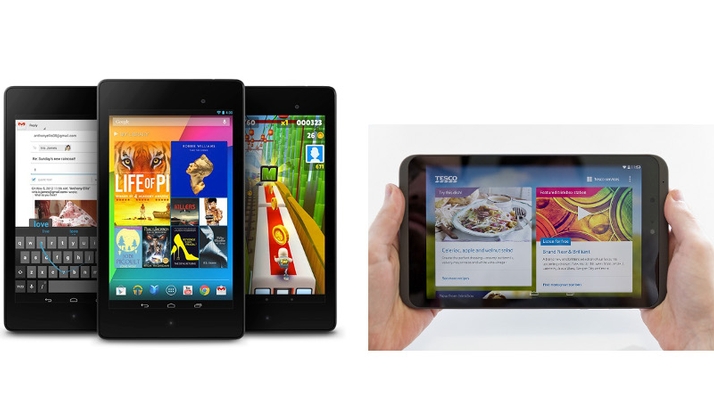 The Nexus 7 was the  Android tablet that changed everything. Launched in 2012 it was the first non-Apple tablet that was really worth having, and not just for the price. A year or so later and Tesco changed the game once more with the original Tesco Hudl – a very good tablet available with your supermarket shopping for a low, low price.

Today Google has discontinued the Nexus 7, replacing the updated 2013 version with two new products: the Nexus 6 phablet and the Nexus 9 tablet. But you can still get the Nexus 7 for a very good price. Meanwhile Tesco’s second generation Hudl is still amazingly cheap, and even more amazingly great.

The Hudl 2 is £10 more expensive than was the original, at a whopping £129. But we’re not complaining. That is extremely good value for money for a quality tablet.

The reason for all of this apparant largesse is simple: Tesco wishes to reward frequent customers with a tablet. It does so to boost loyalty, and so it can tie up Tesco Clubcard data with Hudl use data. It already knows what you put in your shopping trolly, and now it wants to know what films you watch and games you play. That way it can better target you with marketing messages and make itself more money.

That may make you feel ookie, but you can use the Hudl 2 without using the Tesco tools. And it really is a great deal, and you should know that all Android devices are used in much the same way by Google, in terms of targeting online advertising.

Which brings us to Google’s own Nexus 7. Google has, of course, now released the follow Nexus 9. This means that you can no longer buy the Nexus 7 direct from Google. But you can still buy it, new, and if you do you will be getting a bargain – if you purchase the right device at the right price. 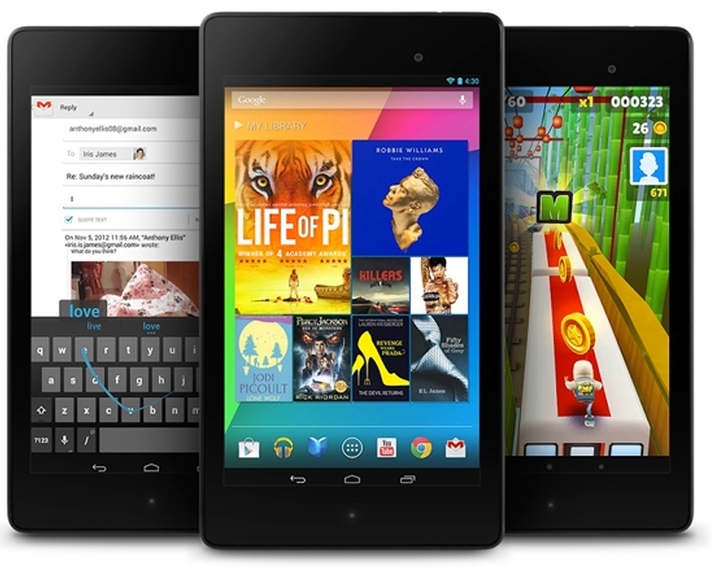 The 32GB Nexus 7 is still available from a range of respectable retailers at prices ranging from £168 to around £200. Drop down to the 16GB version and you can pick one up for around £150 to £200. As with any end of line product you need to be careful that you are getting exactly what you are getting. Ensuring that it is new, and that you buy from a respectable retailer. Amazon has reasonable deals on Nexus 7s right now – you can pick up the 16GB model for a very respectable £169, and have the support of the world’s largest online retailer behind you to back up the sale.

Nevertheless, it is certainly true to say that the Tesch Hudl 2 is way out ahead in terms of price for brand-name Android tablet. Can the Nexus 7 make the price differential worth paying? Let’s find out. (See also: The 25 best tablets of 2014: What’s the best tablet in the UK right now?)

The Hudl 2 has a similar but updated look and feel compared to the original. It uses the same type of plastic casing which has a nice matt finish and a rubbery grip to it. And the Hudl 2 is available in a variety of bright and cool colours. It feels nice to hold in the hand weighing just 401 g, and measuring 9mm thick.

Tesco has done a good job of making the Hudl 2 look more sleek and desirable than was the original, which was plastic and blocky. Its clean lines and rounded corners are pleasing to the eye. It has similarities with the HTC Flyer and iPhone 5c. A couple of caveats are that the holes for the rear speakers aren’t neatly symmetrical with one side getting cut off by the camera and the seam which runs around the edge.

The 2013-flavour Nexus 7 looks very much like the original version, which was a breakthrough Android device. Excellent build quality has been maintained with no signs of unwanted gaps in the casing or wobbly buttons. It weighs a stunningly light 290g and is only 8.7mm thick. If style is your primary consideration the Nexus will likely trump the Hudl.

It’s marginally taller but far more important are the few millimetres which have been trimmed from the width. It doesn’t sound like much but the Nexus is significantly easier to hold in one hand. The vast majority of rival 7in tablets, including the Tesco Hudl, are all noticeably wider when held upright – enough to make it uncomfortable to stretch your thumb and fingers to grip both sides. Stereo speakers are placed at either end of the tablet improving ambient sound, and there is a notification LED below the screen.

Both of these tablets are well built and robust, although it is possible the Hudl 2 has the edge in terms of being tough. But the Nexus 7 remains the style king of Android tablets.

The Tesco Hudl 2 has a great 8in screen. To be precise, it’s 8.3in matching the LG G Pad 8.3 and uses an impressive Full HD (1920 x 1200). The display is bright, offers good viewing angles and nice colours. With a pixel density of 272 ppi everything looks nicely crisp so we’re seriously impressed when you consider the price of the Hudl 2.

But then the highlight of the Nexus 7 is also its amazing screen. The 7in IPS display’s resolution has been cranked up from 1280×800 pixels to 1920×1200, giving it a mammoth pixel density of 323ppi. It results in a display which is simply stunning to look at. 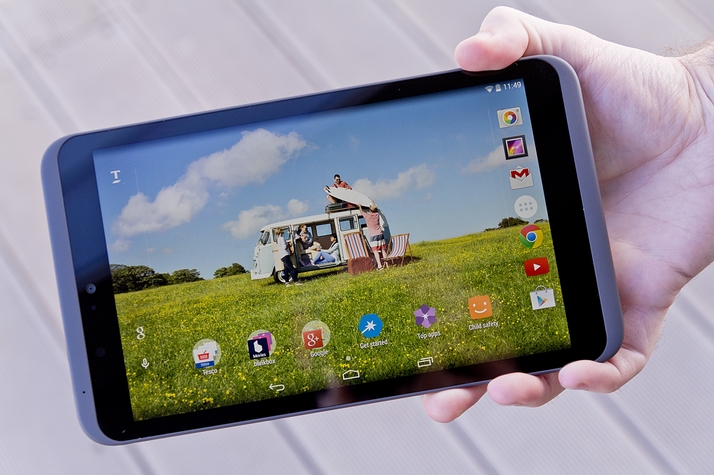 Everything looks great on the full HD screen. Since it’s an IPS panel viewing angles are excellent, contrast is good and colours are vibrant. It’s covered in Corning Gorilla Glass and seems to us to be tough enough to withstand everyday use – our six-month-old tablet still looks like new.

The Hudl 2 is powered by an Intel Atom quad-core processor which clocks up to 1.83 GHz, and is paired with 2GB RAM. Overall, we’re impressed with the performance of the Hudl 2. The device is nippy and smooth the vast majority of the time and copes with web browsing and gaming very well. There are still little signs of lag like when switching between user profiles and occasional jerkiness when moving between homescreens but it’s nothing major.

The 2013 Nexus 7 is equipped with a 1.5 GHz Snapdragon S4 Pro quad-core Krait processor and it also has 2GB RAM. The quad-core processor combined with the latest version of Android means the Nexus 7 feels super slick and responsive. It even boots up quicker than your average tablet, taking just over 30 seconds.

In our synthetic benchmark tests the Nexus 7 stormed though Geekbench 2 and GLBenchmark 2.7, with record scores of 2651 points and, thanks to the 400MHz Adreno 320 GPU, 41fps in Egypt HD, respectively. Whilst not being directly compatible with our Hudl 2 scores these results show us that the Nexus 7 is a player. More up to date scores show that the Hudl is a cut above.

In our Geekbench 3 processing benchmark, the Hudl 2 turns in a strong score of 2165. In the graphics department it is a more modest 17fps in the T-Rex test. Javascript performance is very good with a time of 768ms in SunSpider. In Geekbench 3 the Nexus 7’s score was 1584, in the T-Rex onscreen test it got 16fps. And a time of 1136ms in SunSpider 1.0 is decent, but nowhere near the fastest tablets out there – including the Hudl 2.

Both of these devices are top performers, but the Hudl 2 is a little better. As you would expect – it’s a much newer device. Battery life in both devices is okay without being outstanding.

You might be disappointed to learn that Google is still only shipping the Nexus 7 in either 16- or 32 GB capacities, and there’s still no microSD card slot for expansion. But the Hudl 2 is available only as a 16GB tablet, albeit one with a microSD slot that allows up to 32GB storage. A total of 48GB of storage is better than a maximum of 32GB, obviously. But we would avoid a 16GB tablet, unless you are very disciplined in your storage use.

The Hudl 2 has dual-band Wi-Fi, GPS and a micro-HDMI port. The Nexus 7 lacks the HDMI port.

The Hudl 2 has a 5 Mp rear- and 1.2 Mp front-facing camera. There’s no LED flash and realistically the performance isn’t great. The camera can take an age to focus but if you’re patient, you can get some snaps good enough for sharing online. The front camera is pretty grainy so video calls won’t be the clearest but at least doable.

The Nexus 7 (2013) also has two cameras. The front remains at 1.2Mp and the new rear camera is a 5Mp snapper with auto-focus but no flash. Photos aren’t particularly great. Snap away outdoors in good light and the resulting images are good enough for sharing online, but you’re going to be a bit disappointed with prints. What was surprising was the sheer amount of noise present when viewed at 100% in Photoshop. It’s clearly visible in blue skies, while prevalent coloured noise ruins shadowy areas.

The autofocus and white balance don’t always get it right, and moving subjects such as children, almost always appear as a blur in anything but the best light. There’s no HDR option.

It’s unlikely that either of these tablets will become your main camera, but both have perfectly usable tablet cameras.

Tesco Hudl 2 software is up-to-date with Android 4.4 KitKat and Tesco has made the wise decision of leaving the operating system mostly stock or vanilla (as Google made it). The Nexus 7 is slightly – although not noticably – behind, with Android 4.3. And as a Nexus device it is entirely vanilla Android.

If you have never used Android you should know that it is a full-featured and easy to use platform, these days. Android is every bit as good as is the iPad platform iOS, and although there are fewer tablet-native apps than you will find in the iOS world everything you need can be found there.

Let’s be straight on this: the only reason not to choose the Hudl 2 over the Nexus 7 is if you are opposed to Tesco holding anonymous data on your online actions. And even then you can just switch off the Tesco services. The Nexus 7 is better looking and slimmer, but in all other respects the Hudl 2 is simply better or a match for its rival. And it is much more easy to get hold of. The Tesco Hudl 2 is the best cheap tablet you can buy. For more on the Hudl, read our: Tesco Hudl vs Hudl 2 comparison review.