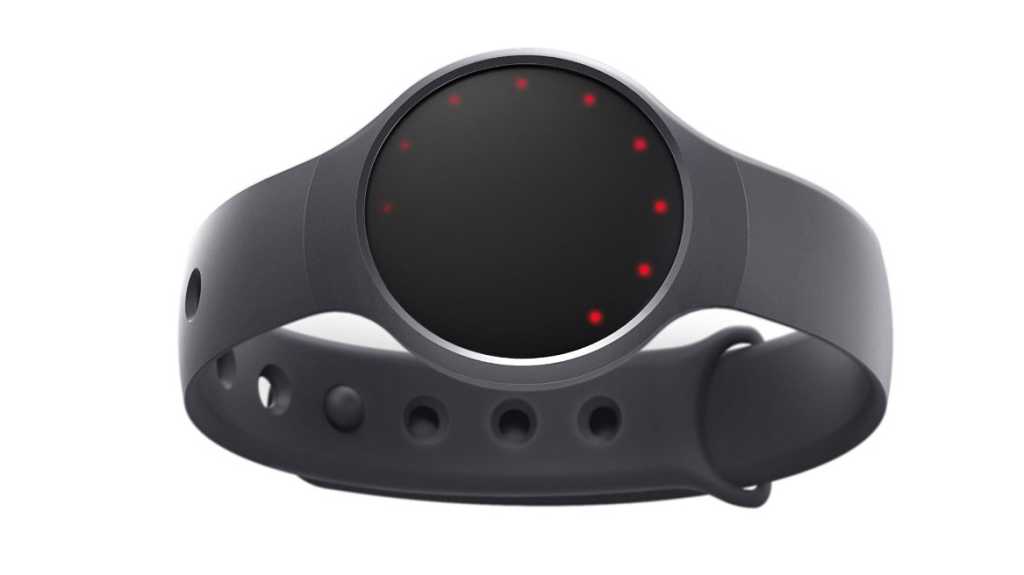 I’ve enjoyed my time with the Misfit Flash, and I’m going to continue using it, however I’d hesitate to recommend it over some of its rivals, including the Fitbit One, which sits at the top of our activity tracker chart. For £50, though, it’s got a decent set of features, a simple and intuitive app and the potential to get better over time if Misfit releases an update or two to include better analysis and calorie counting capabilities. Plus, being waterproof is a real boon, and the automatic sleep tracking is great for those who’re interested in monitoring their sleeping patterns on a regular basis. 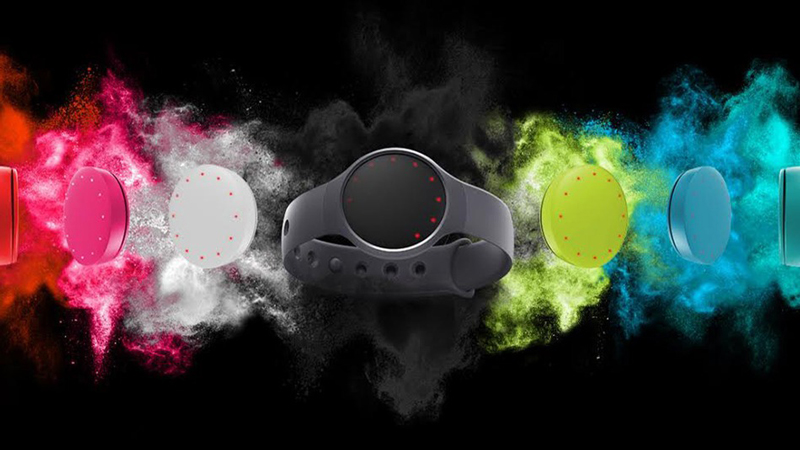 Following on from the success of last year’s Misfit Shine, the Misfit Flash has been launched as a more affordable version of the activity tracking fitness gadget at only £50. We’ve spent a month with the new tracker to bring you our full Misfit Flash review. See also: Best activity trackers

If you’re already familiar with the £99 Misfit Flash, you’ll notice that the first area the company has managed to cut back on to reduce the price is design. Instead of the sleek, smooth aluminium finish of the Misfit Shine, the Flash is made with plastic is looks significantly less fashionable, despite the variety of colour options (shown above). That said, the matt plastic finish is much less likely to scratch than the Shine’s anodized metal.

We’re pleased to see that the Flash is waterproof, just like the Shine, so it can be worn in water even if you’re diving up to 96 feet down. In addition to allowing the Flash to track swimming activity (which we’ll talk about in more depth later), it also means it can be worn in the shower, while you’re out and about in rainy weather, and it’ll survive a round in the washing machine if you forget to take it out of your pocket. 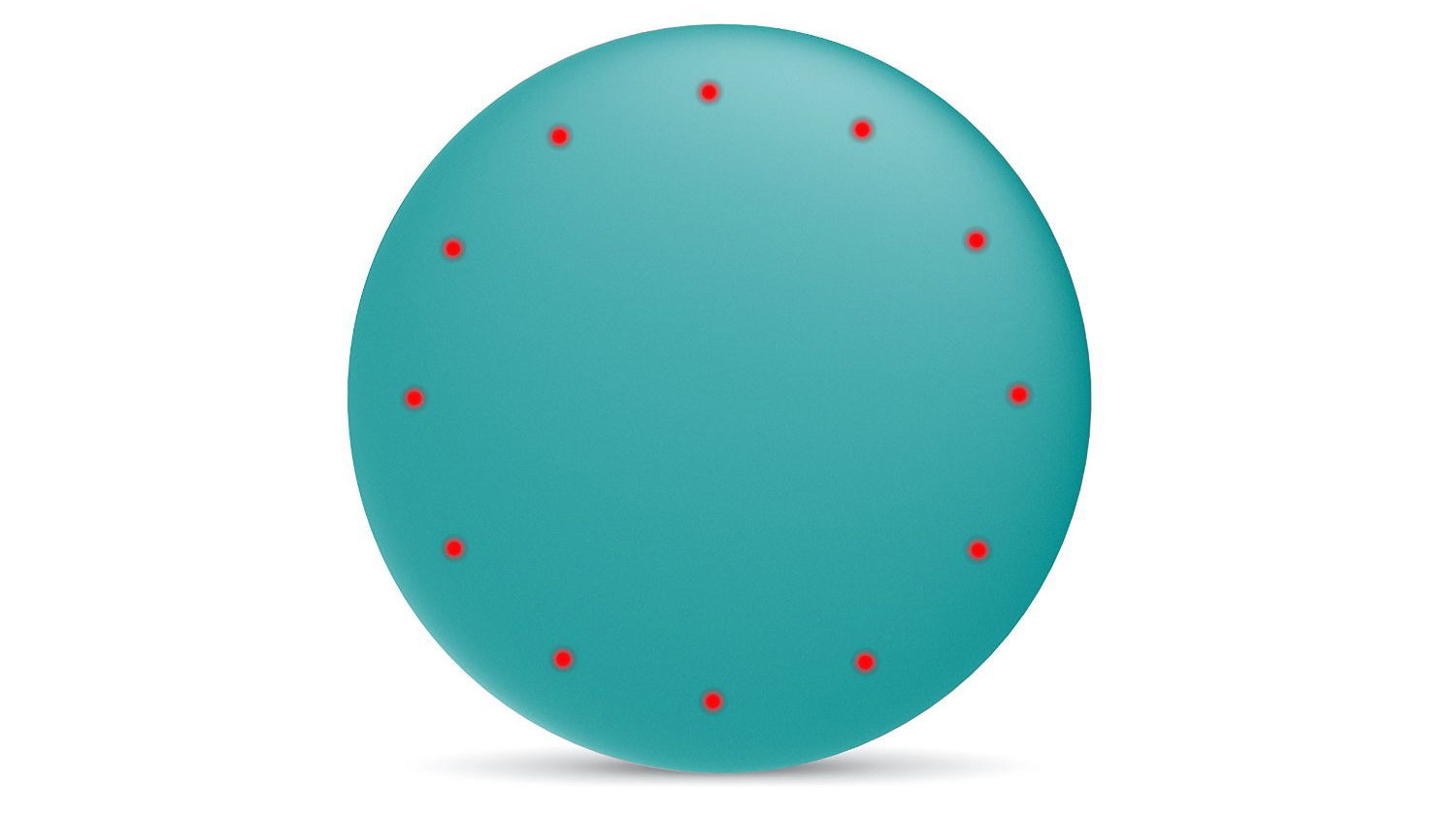 The Misfit Flash features a series of 12 LEDs around its face, which can be used to display the time as well as your daily progress. Misfit has made the LEDs easier to see than they are on the Shine, and they’re easier to activate too. Unlike the Shine, the Flash is a physical button that you can press instead of furiously tapping like you often had to on the shine.

The problem here is that the Flash’s wrist strap is utterly useless. It’s been redesigned since the Shine’s wrist strap, meaning you now slot the Flash in from the underneath which is supposed to make it less likely to fall out. Which is true until you come to actually press the button (which I did quite regularly to see the time and see how well I was doing). Every time I pressed the button the Flash popped out of the wristband or twisted so that the clock face was in the wrong position. I quickly got fed up and switched to using the alternative clip accessory that’s included in the box or simply popping the Flash into my pocket. 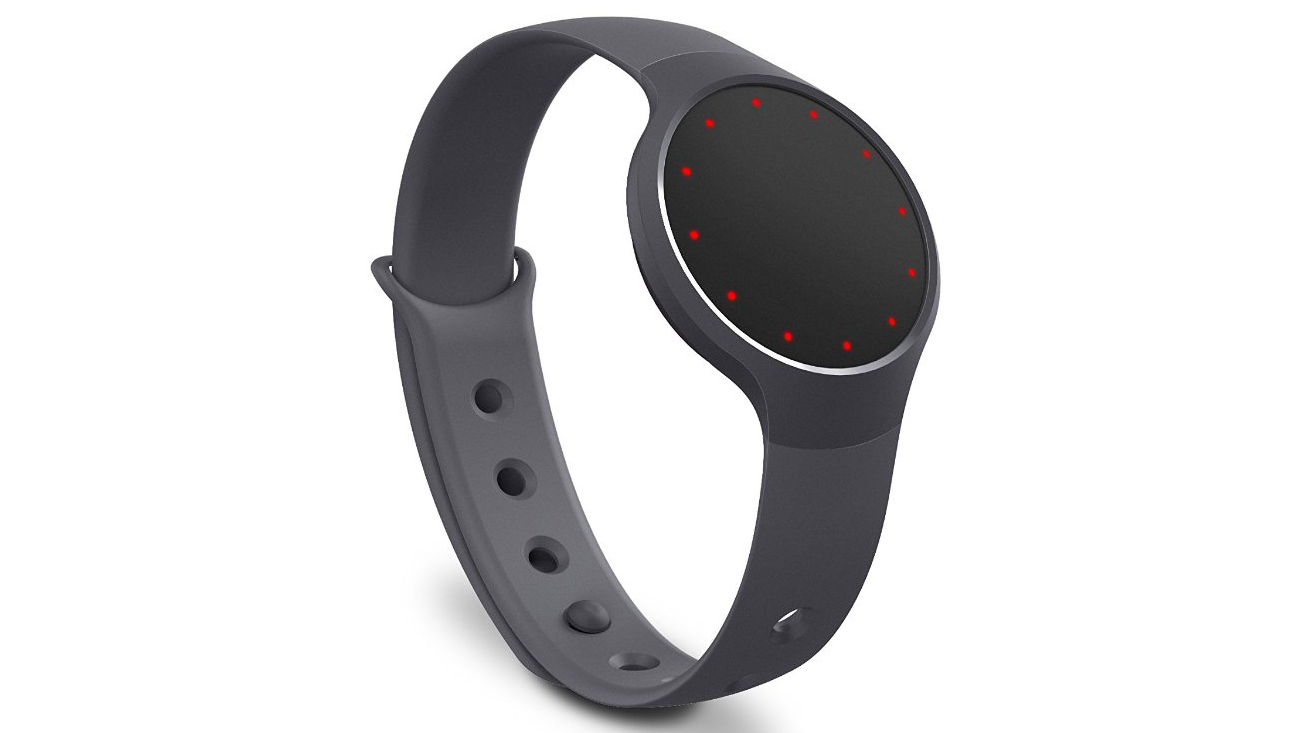 I prefer the clip accessory that comes with the Shine – it’s made with soft, elastic plastic and uses a magnet rather than a plastic clip like the one in the Flash, which tends to dig in to your skin if you’re wearing it on a bra strap or hooked into tight jogging trousers, for example. 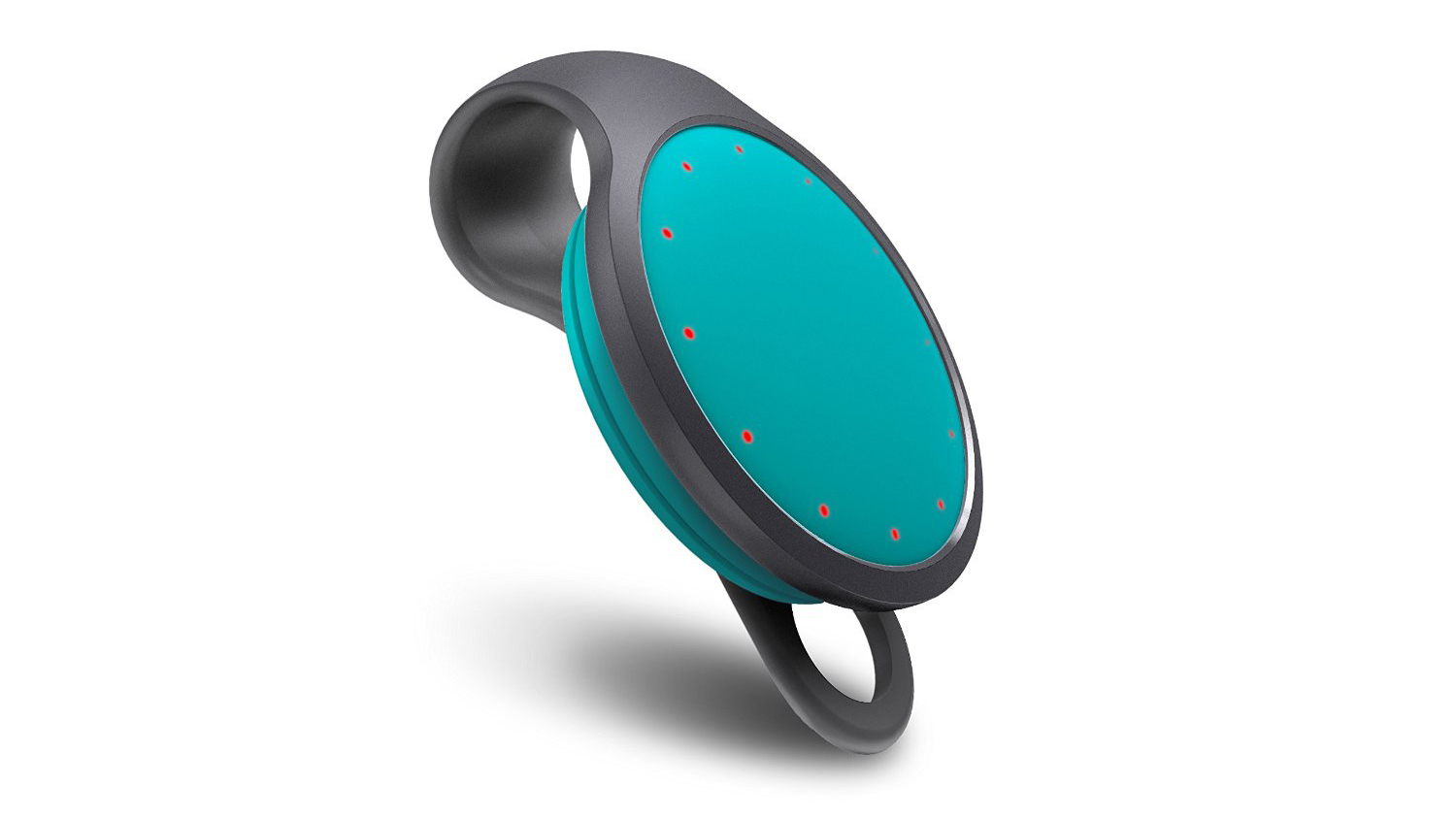 The Flash is easy to setup, so even if you’re not particularly techy you should find it quite straightforward. Just pop open the Flash using the supplied tool, slot in the battery and snap the Flash back together again. You should now see the small LED lights shining on the front of the device.

You’ll need to have the Misfit app downloaded on your smartphone or tablet – the Flash connects via Bluetooth 4.0 so you’ll need an iPhone 4S or later, an iPad 3 or later or an Android device running Android 4.3 or later with Bluetooth 4.0 connectivity (which includes the majority of smartphones and tablets released within the past 2-3 years but it’s well worth checking compatibility with your device before you buy the Flash).

Turn on Bluetooth on your device, launch the Misfit app and follow the on-screen instructions.

Now, you’re probably thinking: “That’s all well and good, Ashleigh, but what does the Misfit Flash actually do?” That’s a great question, and one that I’m going to answer in this section.

In a nutshell, the Misfit Flash can track your activity levels (including steps and miles travelled) as well as sleep. Walking, jogging and running are the activities it tracks best, but it can offer some very basic tracking capabilities for other activities including swimming, cycling, basketball, tennis and soccer (or football to us here in the UK).

For tracking steps, the Misfit Flash seems to be fairly accurate, missing just a few steps here and there. Where you put the band on your body affects the accuracy – we’d advise against wearing it on your wrist if you spend your day typing, for example, even though the instructions suggest that’s the best place to put it. 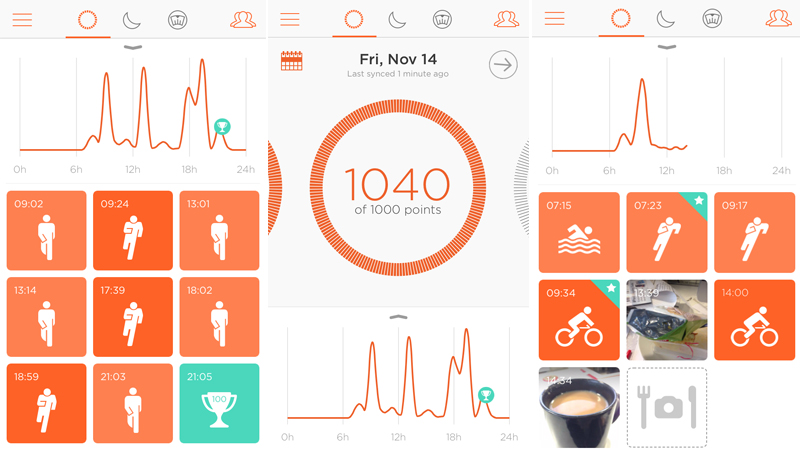 Above: Examples of the day view in the Misfit Flash app. You can log various different activities, see when you were most active and when you reached your goals, and add photos of your meals/snacks/drinks (I accidentally added a photo of the aftermath of my meal, namely the empty takeaway cartons and a crisp packet, but if you want to delete a photo you’re out of luck there).

The accuracy of the Flash doesn’t necessarily matter, though. Most people will find that it’s simply useful for encouraging you to walk more often in order to reach daily goals – it certainly worked for me, I found myself begrudging walking home rather than getting the bus a lot less than usual, because I knew my Misfit Flash would be tracking me and I’d be likely to hit my goal of 10,000 steps.

In addition to tracking walking, you can specify when you’re about to one of the other activities as mentioned above. The Flash will track that activity from the moment you press Start until you press Done. 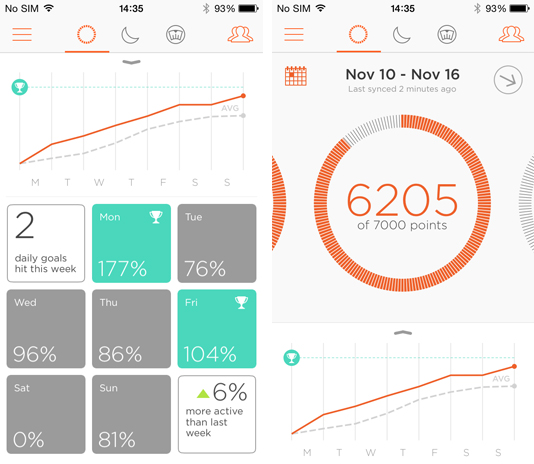 Above: The week view in the Misfit app shows how active you were on each day (I forgot to take my Misfit with me on Saturday), how more or less active you were in the previous week, and how many goals you managed to reach.

The problem is that the activity tracking it does here is VERY basic. It can tell you how long you swam for, for example, and whether you were chilled out and swimming slowly (mild swimming) or really going for it in the pool (intense swimming). And that’s about it. You’ll get points for those activities which will go towards your daily goal, but aside from that you’ll get no analysis, and no other information about activities such as have far you swam/cycled or how many strokes you took.

One reason for this is that the Flash lacks built-in GPS, but this does have its benefits. No GPS means the Flash can track cycling in spin class or running on a treadmill in the gym, something that other fitness trackers with GPS can get confused about.

Even if you don’t tell the app what activity you were doing during a particular period of time, it’ll attempt to guess for you. It pretty much always guesses that you were running, but as long as it’s still the same day you can change the card to the real activity here, something we found useful when we had forgotten to let the app know we were about to start cycling, for example. 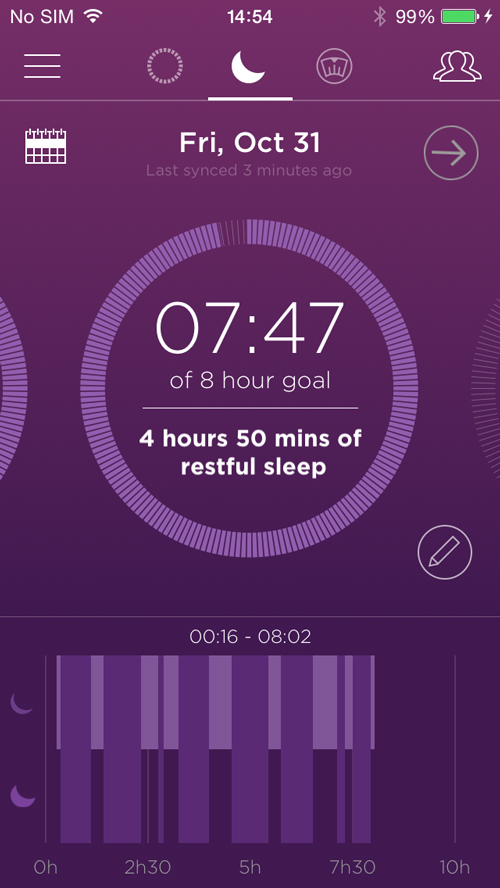 The automatic sleep tracking is fantastic. I’ve tried several other fitness trackers that require you to let it know when you’re off to sleep, and on many occasions I would forget to do so and wake up only to realise that my sleep hadn’t been tracked at all.

The Flash is surprisingly good at figuring out when you’ve been sleeping, and lets you know how many hours you slept for and how many times you stirred. The downside is that there’s no analysis here (there’s a lack of analysis across the entire app, in fact), so the information doesn’t actually mean much.

Actually, there were some nights when I felt I had a brilliant sleep, but my Flash thought otherwise, immediately making me feel more tired (silly brain), so the usefulness of the sleep tracking element is definitely questionable.

The lack of an altimeter means the Misfit Flash doesn’t track how many floors you’ve climbed. We love this feature in the Fitbit One and the new Fitbit Charge, but at £50 you can’t expect the Flash to have it all.

There’s no calorie counting feature in the Misfit app: it’ll tell you how many calories it estimates you’ve burned but you can’t add calories from meals and snacks. You can take a photo of a meal you’ve had if you’re using the iOS app, and that photo will appear in your ‘Highlights’ menu that’s accessed by swiping up from the bottom of the screen, but it’s a pretty useless feature.

However, the Misfit app does offer the ability to connect with other apps and services including MyFitnessPal, for example, and you can enter your weight each day to keep track of your weight loss progress.

The Misfit app offers an alarm feature that we wouldn’t even bother with, particularly as you’ll need to have your phone on and unlocked the whole time, and there’s no haptic feedback (vibration) on the Flash itself.

The final element to the Misfit Flash is the ability to connect with other Misfit-using friends to compare activity and encourage a bit of healthy competition. It’s a definite added incentive, but chances are you might not know anyone else with a Misfit so you’ll have to get them on board.

Instead of requiring regular charging like some of its rivals, the Misfit Flash has a replaceable coin battery that can last up to six months. To me, this is preferable over needing to recharge my device once a week, but of course it’s important to remember that you’ll need to buy a new battery when the six months is up.

Misfit Flash review: How does it compare to rivals?

One of the Misfit Flash’s closest rivals, and one that we’ve recently reviewed on PC Advisor, is the Jawbone Up Move, which, while uglier than the Flash in my opinion, is £10 cheaper if you go without the wrist strap. Plus, the app offers a calorie counting feature as well as motivational cards that surprised us by offering helpful hints and encouragements. There’s more data analysis, too, although it doesn’t automatically detect sleep like the Flash does and it’s not waterproof so no swimming there.

I’ve enjoyed my time with the Misfit Flash, and I’m going to continue using it, however I’d hesitate to recommend it over some of its rivals, including the Fitbit One, which sits at the top of our activity tracker chart.

For £50, though, it’s got a decent set of features, a simple and intuitive app and the potential to get better over time if Misfit releases an update or two to include better analysis and calorie counting capabilities. Plus, being waterproof is a real boon, and the automatic sleep tracking is great for those who’re interested in monitoring their sleeping patterns on a regular basis.