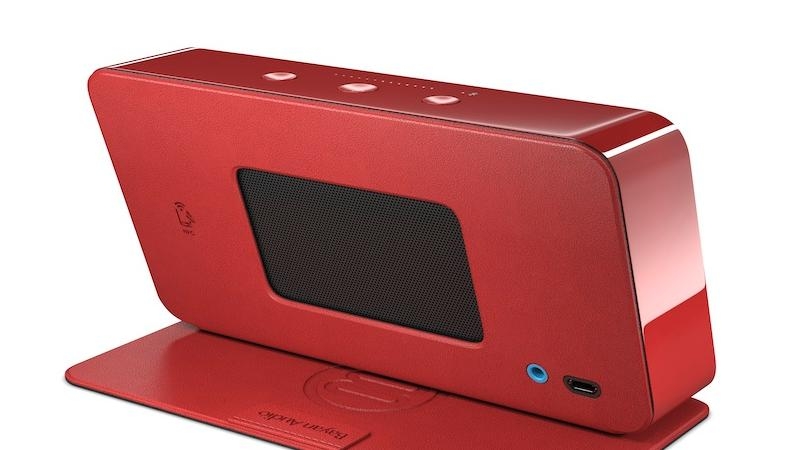 Of the three SoundBooks we’ve opened to date, this is the first that we’ve found to really impress by its sound quality. Bayan Audio has really taken a leaf out of a good book on music here, making an affordable little speaker that bucks the trend for many of its Bluetooth breed by being a delight to listen to. And as with any such speaker though, for best results skip the Bluetooth link and just plug into the jack in the back.

This is the third chapter in the story of the portable Bluetooth speaker, by Bayan Audio. Each carries the title of SoundBook, and the £150 original can now be seen as volume two in size and price terms, with a larger SoundBook X3 the second to be published – and the most weighty at £250. And now we have the pocket-sized budget edition, the SoundBook GO, priced at £80.

All three follow a similar plot, with a front protective flap that folds underneath the raked-back body, so that opening the speaker feels like opening a hardback book.

It’s a neat design that provides some protection to the front perforated grille if you should travel with it; and despite the backward slope, the speaker will never fall over once it’s sat on its own cover.

To help reduce price, various economies have been made in construction and features of the SoundBook GO, when compared to the first editions.

For one, there’s no built-in FM radio for simple sit-and-play music. Build and materials quality have been reduced by now making the unit entirely from plastic, rather than with the premium-feeling aluminium body of the other two SoundBook speakers.

Also removed is the textual display, a dot-matrix effect that shines through the grille to show which source is selected. The nearly hi-fi codec aptX is also struck from the features list, leaving the default SBC, plus MP3 and AAC, as potential wireless compression systems for carrying your digital music through the air.

Which codec is used at any time is entirely down to the device with which you’re Bluetooth pairing. For the iPhone and iPad, for example, these devices should negotiate an AAC real-time compression link to the speaker, the least-worst codec available to reduce data bitrate over the Bluetooth A2DP protocol, after aptX.

The GO model is no longer bullet-proof in construction either. At least, in place of the advertised ballistic nylon front there’s now a leather-effect plastic book cover. You could almost confuse the material with cork, in its matt finish.

To charge the SoundBook GO you plug it in to a USB 5V adaptor – a sign of cost cutting is the absence of any charger in the box. Instead you’ll have to borrow one from another device, or plug into a computer’s USB port to recharge.

On top of the SoundBook GO are just three button: an on/off button, with volume + and – keys either side. A row of 13 tiny white LEDs forms a visual bar to show volume setting.

Inside the SoundBook GO is a pair of 35 mm full-range drivers just behind the black grille, and these provide most of the speaker’s sound. In addition though there is a passive bass radiator at the back, a weighted blob suspended in a rubber diaphragm – rather like a regular speaker cone, only one which simply resonates in sympathy with the front drivers and the air inside, rather than having its own active voicecoil.

The GO box itself is fully sealed and airtight, rather than ported to increase efficiency and bass response, although that bass radiator means there is still a decent sense of low-frequency sound to prop up the otherwise rather limited little drivers. And the sealed-box principle can also mean a better damped sound, which won’t boom needlessly at certain bass resonant frequencies.

In use we found excellent wire-free reception, perhaps helped by an all-plastic chassis that doesn’t screen Bluetooth’s microwave radio as much as metal-enclosed cases. Played from an iPhone, we found we could maintain a link without audible dropouts over a 10 m range through a plaster wall.

Besides the Bluetooth connection, you can plug in to a green-coded 3.5 mm minijack socket on the back for improved sound performance.

The speaker is powered by an internal 8.14 Wh lithium-ion battery, recharged through a Micro-USB port at the back. The surround of this port glows red when charging, and green when charged. Bayan Audio specifies up to 9 hours of music playback when connected wirelessly.

You can find the the SoundBook GO in a choice of four colour finishes for its plastic body – red, blue, white or black.

The SoundBook GO is the smallest volume in the trilogy so far, uses cheaper materials, and has only two drivers against the X3 model’s four. And yet sounds no worse for it; in fact we found the bottom-to-top overall sound quality of this GO was more listenable than its £250 flagship forebear.

There could in part be a psychological factor at play here. The GO is smaller, and generally speaking one doesn’t expect equal or better sound from smaller speakers. Its lower price also sets a lower expectation threshold for quality.

But all that said, we found the Bayan Audio SoundBook GO to be an incredibly well-rounded little speaker. Its tonal balance was spot on for general music listening, as well as for spoken voices and talk radio, giving clear vocal intelligibility across a range of volume settings.

When playing music it didn’t suffer the all-too-common tizz and graininess of low-cost Class D amplification, instead keeping treble relatively calm and untiring to the ear. Tasked with complex mixes and challenging rhythms the SoundBook GO remained in control too, and while we can’t expect to hear much in the way of true fundamentals, basslines remained quite followable.

There was only a mild drag in pace in the bass. That’s admirable where some passive bass radiators can leave you with a sense, in musical timing, of the beat being dragged backward somewhat.

Again, for the size, the SoundBook GO sounds bigger, bassier and plain louder than you might expect of a compact speaker. Tasked with some bass-heavy urban soul music from Rudimental’s Home album, the GO didn’t know when to say stop and simply partied on.