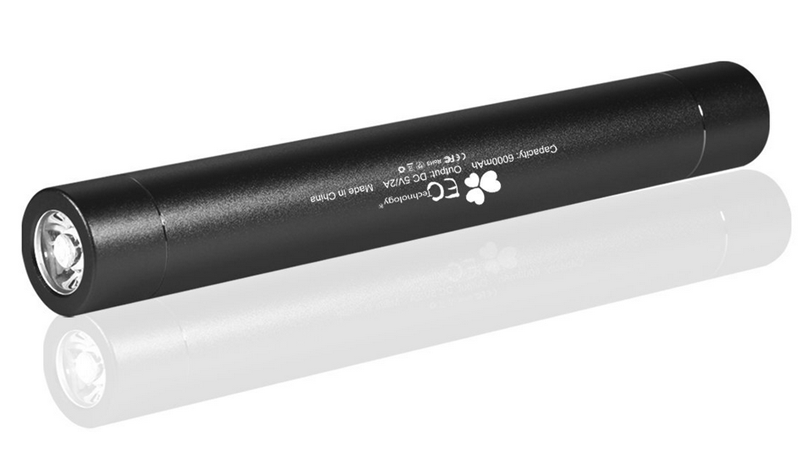 We’ve seen a lot of power banks with torches built-in, but none quite so well done as the EC Technology 6000mAh Ultra Compact Portable Power Bank. Not only does this thing look like a flashlight, its 1W LED is also usefully bright. Also see:  Best power banks 2018.

But that’s not the most useful thing about this EC Technology power bank. With 6000mAh of capacity (of which you should expect to receive at least 4200mAh for charging your USB-connected gadgets), it can keep your phone – or tablet, thanks to the fast-charging 2.1A output – going for just as long as you do.

It’s extremely good value, too – just £11.99 from Amazon UK. That’s twice the amount of power you get from Intocircuit’s Power Mini 3000, and all for an extra quid.

Sure, this EC Tech device isn’t quite so pocketable as the Power Mini, some 174mm long, but it weighs just 147g and you really won’t notice its presence in a handbag or rucksack.

We like the EC Technology power bank’s design. A cylindrical tube of aluminium with a matte texture, it’s easy to grip and feels reassuringly tough. Plus two chrome rings, one at either end, remind us of a magic wand. Cool.

Our only criticism is that there’s no way to tell how much power remains, which means you could get caught short.

For refilling the power bank there’s a 1A Micro-USB port. This is pretty standard, although we’ve seen better – and worse. It does mean that it will take twice as long to charge the EC Tech as it will to drain its power.

Note that you can’t charge your phone and the power bank ar the same time – EC Technology doesn’t include support for features such as passthrough charging and auto-on/-off – but at this price you really have no right to expect that.