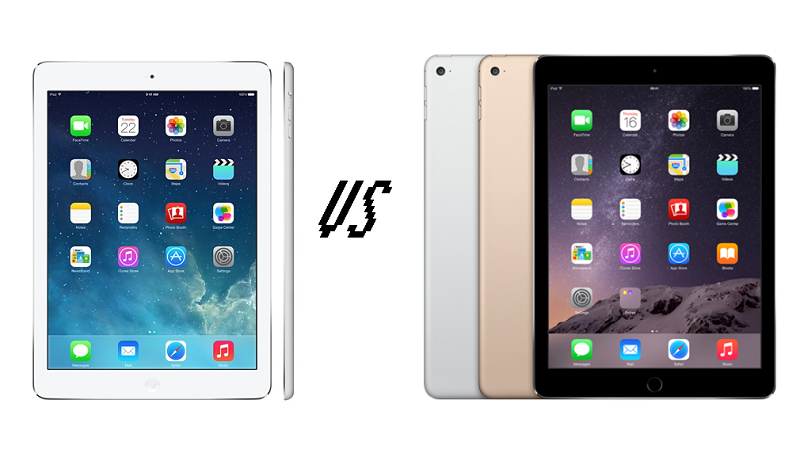 The iPad Air 2 is thinner and lighter and has new features including the Touch ID fingerprint scanner, new processor, improved cameras and 11ac Wi-Fi. However, most of the changes won’t be overly noticeable on a day-to-day basis so unless you want more than 32 GB of storage, we wouldn’t blame you for sticking with your iPad Air or going for the older model to save some cash.

As per usual, Apple has brought the latest iPad in at the same price point as before. That means the device starts at £399 for the cheapest model. Meanwhile, it’s the original iPad Air which remains on sale at a lower price of £319. You can buy older full-size iPads from Apple but only via the refurbished store.

There are three capacities of the iPad Air 2 available to choose from and the option of 4G cellular data if you need it. You can still buy a cellular iPad Air but there are now only two storage amounts to choose from if you’re buying new. See the below table for all the prices.

Apple loves making things thinner and lighter than before, and that’s exactly what’s happened with the iPad Air 2.

The original iPad Air is 7.5 mm and although Apple says the new model is just 6.1 mm, our calipers tell us that it’s 6.3 mm. On the weighing scales, our 4G sample comes in at 467 g which is a little more than 444 g which Apple claims. That’s 20 g lighter than the iPad Air. Although the numbers might sound nice, in real life it’s not a very noticeable difference at all.

A couple of design changes to note are the addition of a gold model with the iPad Air 2 and the loss of the screen-lock switch – that handy toggle which used to sit just by the volume buttons.

As well as making things thinner and lighter, Apple enjoys making its products faster. To this end, the iPad Air 2 has a new A8X processor which is still 64-bit and also has a new M8 co-processor. Apple claims this processor is 40 percent faster, with graphics 2.5 times better than found in the Apple A7 chip in the first iPad Air.

As you can see in the table below, the iPad Air 2 is more than 40 percent quicker in the multi-core test. Just remember that this is a synthetic test and you will not notice that kind of difference between the two in day-to-day use.

It’s worth noting, even though Apple never quotes it, that the iPad Air 2 has 2 GB of RAM compare to 1 GB of the iPad Air.

On the graphics side of things there is a fairly big improvement with one test out of the two living up to Apple’s claims.

On the face of it, the screen looks to be no different on the iPad Air 2. It’s still 9.7in and has the same Retina quality resolution (2048 x 1536). However, Apple has now laminated the front glass to the LCD itself, meaning the display feel like solid glass again. It’s also less reflective, thanks to a new anti-reflective coating across the glass.

A new feature to the iPad Air 2 is the Touch ID fingerprint scanner which was introduced with the iPhone 5s. The Touch ID button feels just like that on recent iPhones and means the iPad comes to life shortly after you press your digit onto the sensor.

It’s certainly a handy feature but not as much as on the iPhone which you start and stop the display far more frequently. It will be a boon to the compulsive iTunes Store shopper, as you can use it to buy apps and media without the tedious typing of your Apple ID password.

The remaining specs of the iPad Air 2 are pretty much the same as the original with the Lightning connector, nano-SIM and Bluetooth 4.0. However, it is worth noting that the new model does have superior wireless as Apple has finally employed 802.11ac Wi-Fi and has added a barometer which can be used for elevation changes.

Upgrades have been made to the camera with most of the work going on the main one at the rear. The front facing FaceTime HD is still 1.2 Mp with 720p video but has a new sensor which improves low light performance.

Apple’s battery life claims tend to be pretty accurate and honest. That means the Air should last all day, regardless of whether you’re watching videos or browsing the web via Wi-Fi. There’s a smaller capacity battery inside the Air 2 – 27.3 Wh compared to 32.4 Wh in the Air although Apple claims 10 hours battery life for each.

There’s no difference in software since iOS 8 is available for both devices.

The iPad Air 2 is thinner and lighter and has new features including the Touch ID fingerprint scanner, new processor, improved cameras and 11ac Wi-Fi. However, most of the changes won’t be overly noticeable on a day-to-day basis so unless you want more than 32 GB of storage, we wouldn’t blame you for sticking with your iPad Air or going for the older model to save some cash.