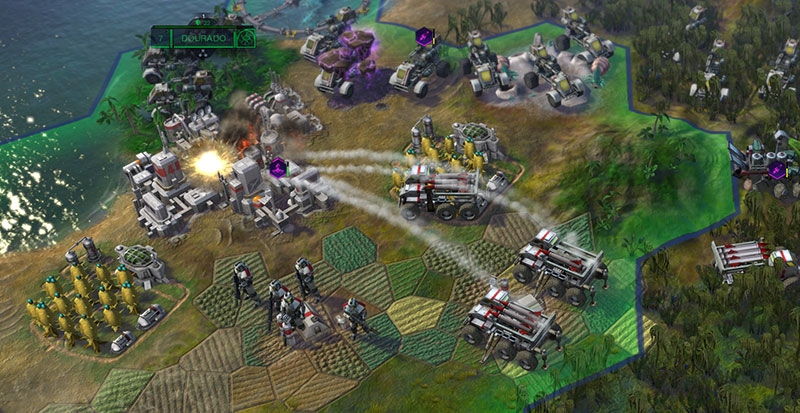 Sid Meier’s Civilization: Beyond Earth doesn’t exactly live up to its subtitle, but it’s a solid enough strategy game if you can shrug off how familiar it feels.

The venerable historical strategy series moves beyond the final frontier. Well, kind of. Once past initial impressions, Sid Meier’s Civilization: Beyond Earth’s alien worlds turn out to be oddly Earthly, despite the presence of feral, giant beetles and worms.

Set in a possible future for humanity, you’re in control of the first off-world colonists, trying to first survive, then flourish and eventually prove the superior of rival nations’ settlers. Every turn means agonising about what to build, what to research and, if that’s your chosen path, who to fight.

Strange technologies, creatures and minerals abound, but swiftly most reveal themselves to primarily be analogues of those in the still-fresh Civilization V. Initially, you’re on a hostile world, presented with alien foes who can’t easily be bested, and a vast array of strange new science to research. Unlike Civilization V, you’re not discovering arrows or mining, but orbital platforms and alien-human hybridisation. There’s a great deal of intricacy to Beyond Earth’s research tree, and the attendant units and buildings you add to your nascent civilization.

Its new Tech Web is a fine addition to the Civilization formula, replacing the old branching but linear progression of new scientific discoveries with a freeform spread of techs you can pick and choose from as you please. This is far better suited to long-term strategies, and planning out what sort of Civilization you want to be – warlike, technological, cultural – you want to be from the off.

What’s missing is a certain zest – this is science fiction at its most buttoned down, either too fearful or unable to depart from the relatively sombre tone of the Civilization series.  Every ‘planet’ your game is set on looks the same, there are only a handful of aliens, all of which cease to be much of a factor after the first couple of hours of a campaign, and a new quest system, designed to present moral dilemmas such as whether to welcome or eradicate a sub-species of augmented humans, is bitty and dry. There are little ideas everywhere, but they don’t quite coalesce into a personality. 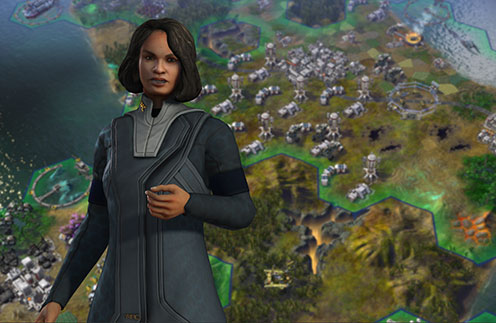 Moreover, it doesn’t take long to fall into playing a game of Beyond Earth in the same ways we played Civilization V.

Despite great hopes to the contrary, it’s difficult to deny that Beyond Earth is Civ V with a new skin and some bells and whistles hung around the edges. Of course, Civilization V is a great strategy game, and a few years old now, but it still seems too much of a going concern for its follow-up to be quite so similar. While this means Beyond Earth is built on solid foundations, it doesn’t exactly reach for the stars from them.

Of course, Civilization V was much improved by its two expansion packs – it too seemed on the dry side at first. That may well be the case for Beyond Earth in time, but as well as being something of a gamble it also means potentially waiting for up to two years for it to blossom.

Beyond Earth is by no means a failure, and it certainly retains the old ‘just one more turn’ Civ magic to some degree, but it pulls so many punches and seems so risk averse despite the move to a wilder setting. It is a game you can learn to love, as there’s no small amount of carefulness deep beneath its rather plain surface, and coaxing that out in long campaigns at the highest difficult settings or in multiplayer will keep die-hard Civheads busy.