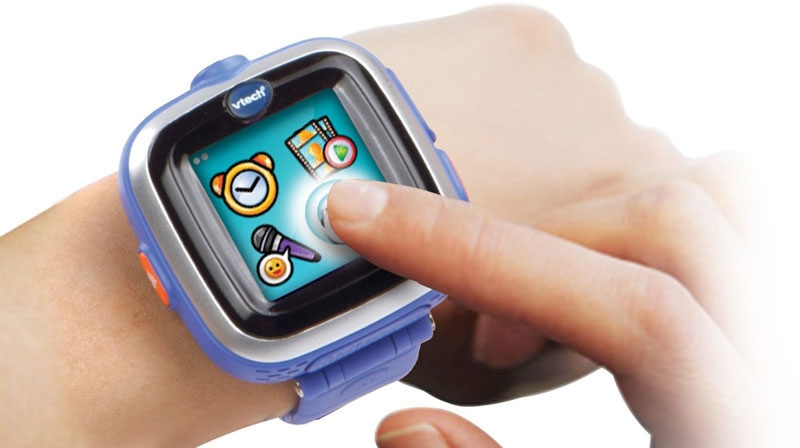 The VTech Kidizoon Smart Watch DX is a good-looking fun wristband that’s packed with fun multimedia functions. The still and video camera plus voice recorder with effects will liven up any party. There are tons of analogue and digital watch faces, plus a stopwatch and timer. The five built-in games are the weakest part of the package, but the rest of the features make the Kidizoon Smart Watch DX a fun wristband for kids or irony-friendly hipsters. The new pedometer and fitness activities are welcome new additions.

VTech’s Kidizoom Smart Watch DX, recently updated, is a well-made, fun gadget packed with features that should entertain young children, if not educate them or keep them fit like other kids’ toys.

It features both analogue and digital watch faces on its 1.44-inch screen, an alarm, 0.3-megapixel camera, stop watch and timer, voice recording and games.

The design is clean and smart, and the specs are reasonable for something at this price (around £40 online; see the bottom of this review for the best prices). It’s aimed at children aged 4 to 9 but I wouldn’t be surprised to see a few adult hipsters wearing it for fun. Yes, it really is that cool but poses little competition to the more serious smartwatches. We loved the white version of the earlier Smart Watch Plus, but that colour hasn’t made it to the newer DX range.

It’s comfortable to wear and has a safe buckle so shouldn’t be easily lost. Our eight-year-old tester Lexi found the strap to be “comfortable and smooth,” although it’s perhaps a little too large for everyday wear.

The VTech Kidizoom Smart Watch features a colour touch screen so kids can navigate easily through taps and swipes – the usual stuff they’re so adept at. There are tons of settings so you can choose your optimum setup – brightness, volume, menu layout, etc.

Picture shows older white version but the same watch time faces are on the newer DX version of the Smart Watch.

As a watch it should tell the time well, and this it does with a wide choice of around 50 analogue and digital faces – just like the Apple Watch. Well, they’re not quite as stylish but the functionality is there. Even the Stopwatch has five different styles to choose from.

You set the time and date when you first turn the Smart Watch on. You can set the time to either UK or US date format, and pick between 12-and 24-hour clock.

There’s a new Time Master feature that helps children learn to tell the time. As this is the primary function of a watch this educational element is a great new addition (missing from earlier versions).

Also read: How much screen time is healthy for kids.

The 0.3-megapixel camera – 640-x-480 photo resolution, and 320-x-240 video – isn’t going to win any prizes for photo or video quality, but it’s for fun snaps rather than forever keepsakes. The Smart Watch allows you to add various effects to the photos, mostly pretty naff and overly colourful photo frames.

The problem with cameras on watches is that images are often blurred through movement, but the camera placement at the top is neat, and you can always take the watch off when taking a few snaps.

The VTech Kiddizoom Smart Watch DX is available in three main colours: pink, blue and green. We have seen special versions online in Camouflage and Floral Swirl, but these are online-only exclusives in the US. A limited edition Star Wars watch will launch in the UK Autumn/Winter 2017.

You can do the same with videos, which are more fun than the photos. Kids are bound to enjoy making these, but you’ll want to transfer the best ones to a computer as the 256MB built-in memory is sure to fill fast. Again, the DX improves on the previous Plus version, which had just 128MB of memory. This should be enough capacity for 1,600 photos or up to 23 minutes of video (at the lower 160-x-120-pixel resolution; 11 minutes at the higher rate).

You connect the watch to a computer using the supplied Micro USB cable. This is also used to charge the watch’s rechargeable battery. VTech suggests you’ll get 2 weeks battery life out of one charge at low usage, 2-3 days at average, and one day for heavy usage. To preserve battery life the screen will automatically shut off after a short period of time when in clock mode.

What may be the VTech Smart Watch’s killer feature is the Voice Recorder that records your voice and then lets the user hear it back through a selection of funny voice effects. This can be hilarious and may be worth the price of the gadget on its own. I can see this being a lot of fun at Christmas and birthday parties. I bet Apple isn’t smart enough to add this to its Apple Watch. It should.

These physical activity based games are a great addition, as is the new Pedometer to count the child’s steps. Getting children more active might make this toy worth its price tag on its own, and could be the first (ahem) step towards getting your child hooked on an activity tracker such as a Fitbit. Note that VTech makes no claims as to the accuracy of the pedometer, so if you want a dedicated watch/pedometer check out our   Best activity trackers and Which Fitbit is best? features.

We’d have liked a parental-control feature that switches off all functions except the clock so that kids aren’t distracted at school. The rival Leapfrog LeapBand has this handy feature. Read our comparison review of the VTech Kidizoom Smart Watch vs Leapfrog LeapBand.

The design falls down on a couple of issues, but these aren’t deal breakers. The On/Off button is tiny and too fiddly, and the soft cover for the USB charging and syncing port feels a flimsy.