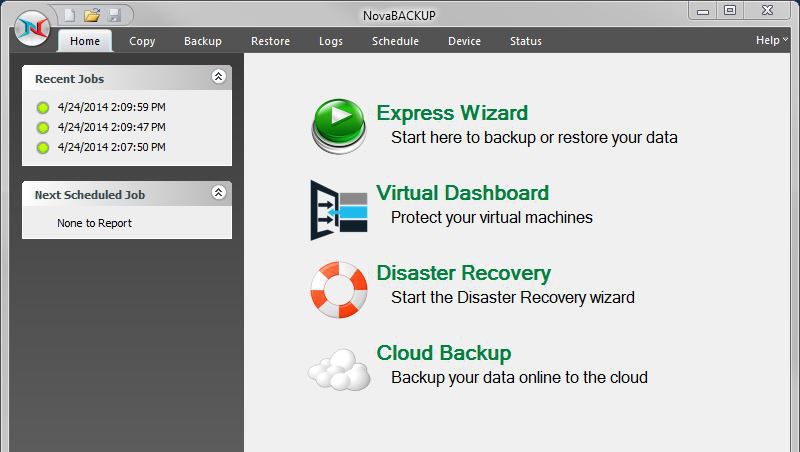 To take market share from a market leader, a competitor needs to offer something extra. Novastor NovaBACKUP Professional 16.1 has similar functionality to its Acronis rival, but drops out in several places, most notably the setup of a boot CD, backup size control and online storage allowance. It has no particular advantage in speed or cost.

Acronis may be the best known name in Windows PC backup software, but as you move into the corporate and enterprise arenas, NovaStor is probably the bigger player. Headquartered in Switzerland, but with development centres in Germany and California, Novastor also has a one- and three-licence product for the home and home/office customer, NovaBACKUP Professional, which is now in version 16.1. (See also: Acronis True Image 2014 Premium backup software review.)

This product covers both file and system backup – NovaStor calls system backup Disaster Recovery – which saves the whole disk contents. It also includes a scheduler, wizards for easy setup and a copy utility, which can also be scheduled.

Novastor offers online storage for your backups, but this is little more than a token gesture, with just 2 GB included with the package. This is probably because NovaStor uses third-party storage providers: FirstBackup in the US or Sitaas in Germany. We’d suggest that 5 GB in a backup application should be a minimum on a single-PC licence, with more on a three-PC purchase.

The main control screen is neat and uncluttered. Eight tabs along the top cover the main areas of the program and their corresponding screens have different layouts, depending on function. See also best backup software.

The Home screen shows lists of recent backups and the next scheduled job, both of which are useful, but most of the screen is taken up by three large icons leading to the main backup, restore and cloud storage wizards.

The backup wizard is particularly easy to use, as it goes through, in order, the type of operation you want to setup, the type of backup (file, system or cloud), the source and destination of the backup. There’s also a schedule, if you should want to apply one, and a summary display before you start the job.

If you prefer to work from the main screen, you can use the Backup tab to display and select individual folders or files for backup and customise just the items you want to secure. Similarly, files can be restored selectively.

The scheduler is reasonably comprehensive, although you can only limit the total size of stored backups by specifying an age – for example, nothing over a month old. Although the schedule panel offers a Count control, this specifies the minimum number of backups to maintain, not the maximum.

The program can produce a rescue boot disk, but the process is convoluted. Rather than using a small linux installation and creating the disk automatically from within the program, you run the Recovery wizard, then have to download and install Microsoft’s Assessment and Deployment Kit, before burning a DVD or saving to USB drive with it and your chosen system backup. Very messy.

Under test, NovaBACKUP Professional 16.1 took 31 min 17 sec to backup a 50 GB uncompressed basket of files to an eSATA hard drive, producing an archive of 48.2 GB.

That was around 50 percent longer than Acronis True Image 2014 Premium took. The compressed run was quicker than True Image though, at 26 min 28 sec. However, the level of compression from NovaBACKUP was minimal, producing a file of 47.5 GB and there only appears to be one compression level, versus Acronis’ three. See also best backup software.