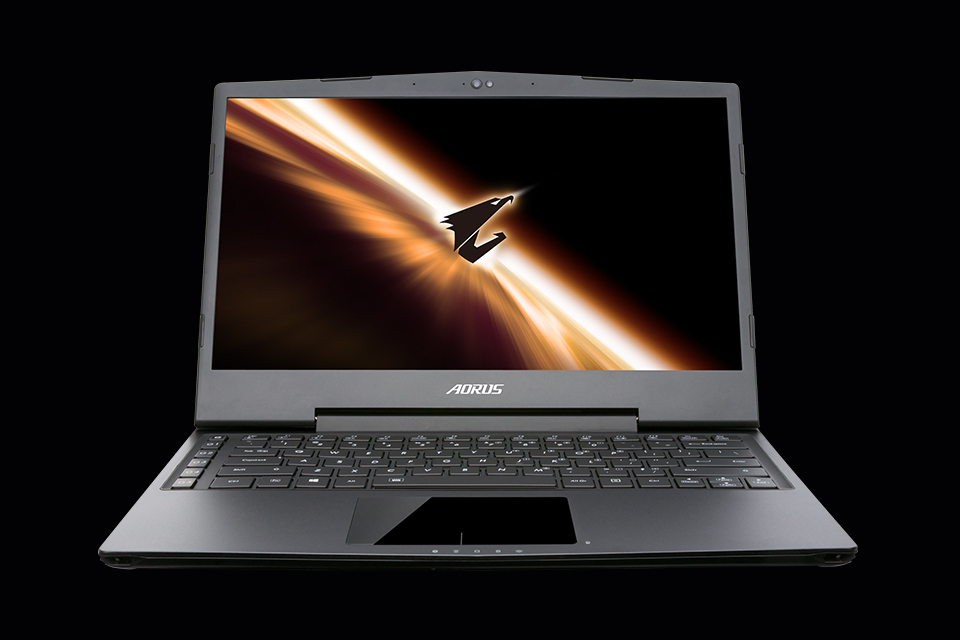 The Aorus X3 Plus works well as a portable games station, providing fast framerates with modern games at high details settings. Its high-resolution screen is less obviously useful for its gaming role as fewer games may benefit from its high 262 ppi pixel density, and the Windows platform does not support absurdly high resolution displays well. When it does work you’re rewarded with a pin-sharp image but remember that for gaming there’s arguably little need to exceed 2560 or even 1920 screen pixel widths. Overall there’s definite room for improvement by its maker but the X3 Plus should prove popular with Windows gamers looking to combine performance and portability.

Under the brand name Aorus, there are two laptops available from the Taiwanese motherboard brand – the 17.3-inch Aorus X7 which we reviewed recently, and the smaller 13.3 or 14-inch X3.

There are two versions of the Aorus X3, identical except for a slight difference in screen size and resolution. The standard X3 has a 13.3-inch 16:9 widescreen with 2560 x 1440-pixel resolution.

We were sent the X3 Plus to review, which has a 14.0-inch 3200 x 1800-pixel display. Note that for marketing reasons the Aorus literature incorrectly lists this as a 13.9-inch screen.

It may have a business laptop screen but this is very much a gamer’s machine, with the focus on a gaming GPU that here is fulfilled by the recent nVidia GeForce GTX 870M mobile graphics processor. And while the 800 series chips are not quite cutting-edge now that nVidia has announced the GTX 900 series for laptops, we did find very respectable gaming framerates were available. See also 27 best budget laptops UK.

As we saw with the Aorus X7, the X3 Plus is built around an all-aluminium case – still perhaps a unique construction plan among Windows laptops. This is given a black anodised finish over its deliberately angular chassis, and together this design gives more than a nod to the stealth-bomber style that was first popularised by rival gaming-machine specialist Alienware.

The dark finish is not without problems, as we found it could be indelibly marked quite readily by objects rubbing against it in a laptop bag; and it’s also liable to chip on corners and edges after some everyday use. It’s possible some gamers may like the ensuing battered and tatty look, but if you want to keep this laptop in the black, tread carefully. (See also: Best gaming laptops best power laptops for games.)

The latest processors from Intel and nVidia are consuming less power and delivering more performance than ever before. But packing some of the best examples from each silicon vendor into a relatively small chassis will always presents thermal challenges. Gigabyte has included vents all around the casework to allow air in and out, and the fans are audibly on more than they’re off. Suffice to say a lot of air is being pumped through this laptop to keep it cool. Fan noise is distracting but not insanely loud.

We noticed that after a week’s use on an office desk, the inlet grilles on the underside were quite clogged with dust, so you’d be advised to check these and clean regularly in order to maintain essential airflow.

The keyboard includes backlighting and a row of macro keys up the left edge, which some gamers may find useful. We weren’t so taken by the action of the keyboard, which has an almost annoying clatter from its Scrabble-style keys which unlike proper mechanical switches do not convey quality as you type.

The trackpad follows Apple’s buttonless design, a usefully large touch panel that has a polished gloss finish. Unlike a MacBook’s slick glass, this one is an acrylic plastic and feels sticky or greasy in comparison.

The Aorus X3 Plus sports three USB ports, two of these on the right side to USB 3.0 spec. Also on this side is an SD card slot, and the laptop’s power button. This switch is recessed within the chassis and was found to feel rather gritty, and in no way a premium-feeling way to power up a luxury laptop.

On the left side lie two video outputs – Mini DisplayPort and HDMI – as well as an older USB 2.0 port and audio in/out jacks.

The back edge echoes the stealth bomber theme with its hot-air exhaust ports and wire mesh grilles. The power inlet port is dead central and gigabit ethernet just to one side.

Powering and charging the Aorus X3 Plus is a large and massive power brick. As we found in the lab tests, battery life is not horrifically short when tasked with just playing a video, but bear in mind that if you’re travelling with this 1.87 kg laptop you’ll need to be prepared to also heft the 0.78 kg mains adaptor, for an all-up weight of around 2.7 kg.

We’re still some way away from MacBook Air/ultrabook territory, especially when you check the 24 mm thickness. Size and weight are impressively reduced from gaming laptops of yore though, especially when you factor in the increased performance over what’s gone before, all now available without meltdown.

Inside the Aorus X3 Plus is a two-stream 11ac wireless adaptor and the now-standard Bluetooth 4.0. For storage Gigabyte has chosen some impressive-looking RAID 0 striping of two smaller SSDs.

There are two 256 GB LiteOn LGT-256M6G solid-state drives, taking the long M.2 NGFF standard rather than traditional SATA or mSATA shape. Next-generation form-factor flash drives are still in flux when it comes to actual bus protocols, although these examples may stil be using Serial ATA 3.0 protocols since the Intel RAID controller in use here is talking the language of SATA.

For memory there are two 8 GB SO-DIMM cards from Transcend, and system memory can be upgraded to up to 32 GB. When it comes to main processor, there’s a choice listed between two fourth-generation Haswell quad-core chips, either a 2.4 GHz Core i7-4860HQ or 2.5 GHz Core i7-4710HQ.

We tested a model with the former version, which is specified with a higher Turbo overclock frequency of 3.6 GHz (against 3.5 GHz for the latter processor).

There’s but one choice for graphics processing, and that’s the nVidia GeForce GTX 870M with a whopping 6 GB of GDDR5 memory. Optimus switching technology is supported, so when whitelisted graphics-intensive programs aren’t running the laptop should fall back to its still usefully powerful Intel Iris Pro Graphics 5200 processor that is integrated into the main CPU.

Where the big Aorus X7 laptop takes two GTX 860M processors, the X3 Plus has a single nVidia GeForce GTX 870M. Nevertheless this could turn in some impressive gaming performance.

From Tomb Raider (2013) we saw average framerates of 60.9 fps, running at full-HD screen resolution and Ultra detail settings. There’s one more preset above this, and in Ultimate mode it could still return an average framerate of 38.3 fps, with a minimum dip to 29.1 fps that suggests consistently smooth gameplay.

At 1600 x 900 and High detail, framerates averaged 62 fps with 11.1 fps minimum; and at 1920 x 1080 and Very High detail settings it could average 31.3 fps with a minimum of 12.9 fps. For the latter setup we also raised other settings, putting texture filtering at AF 16X, motion blur to Normal, and Very High tesselation.

PCMark 7 returned a fine result of 6627 points. PCMark 8 has separate modules to test performance based on usage models, and in the Home test it scored the X3 Plus with 3130/3595 (conventional/hardware-accelerated graphics), and 3023/4104 points in the Work test.

Unusually, the Aorus X3 Plus’ screen uses not TN or IPS technology, but Sharp IGZO (indium gallium zinc oxide). In fact it must be the first example of this interesting screen technology that’s crossed the IDG labs threshold. It looks to be the same panel that Fujitsu has employed in its LifeBook U904 business ultrabook laptop.

This matt anti-glare display has four times the resolution of the 1600 x 900 panels found in some laptops, and by default Windows 8.1 has been configured by Gigabyte to scale the interface to 200 percent in order to make it more legible. This restores the interface to a usable size, even if some Windows programs do not respect this scaling and are rendered with indecipherable text and graphics.

Our lab tests found this panel to perform well, with 97 percent sRGB coverage and 73 percent of the Adobe RGB colour gamut. Its contrast ratio was not especially impressive, showing a maximum of just 450:1 at 100 percent (296 cd/m^2) brightness, and 410:1 at a more realistic half-way brightness setting (149 cd/m^2).

Colour accuracy was good, with an average Delta E of just 1.29 overall from 48 spot tones, although colour uniformity across the display was less consistent. The top of the screen deviated by around 10-12 percent from the bottom, where a drift of 2-3 percent or less is more typical for an IPS display, for example.

Luminance uniformity across the panel was very good, mostly within 10 percent and reaching a high of 14 percent on the left side, but this should not be apparent to the eye.

Battery life from this Optimus-switching laptop was poor by regular laptop standards but less unexpected for a gaming machine. In our looped MPEG-4 video test over Wi-Fi, with screen set to 120 cd/m^2, the Aorus X3 Plus ran for 4 hour 25 min before expiring. See also:  22 best laptops: What’s the best laptop you can buy in the UK?