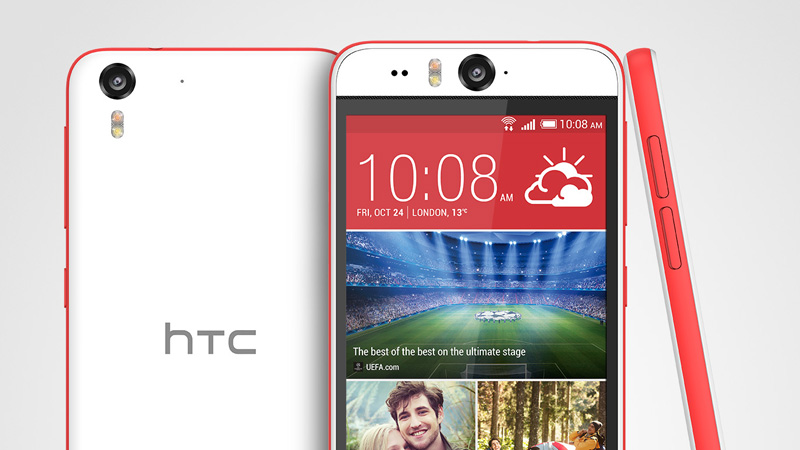 We are thoroughly impressed with the HTC Desire Eye: it’s fast, it’s good value, it has a nice screen and it sounds great. Better still, it makes you look pretty.

The HTC Desire Eye is the latest in a growing craze of super-selfie smartphones, offering twin 13Mp cameras, both with dual-LED flashes. But how does it fare beyond the vanity stakes? We reveal all in our HTC Desire Eye review. Also see: Best smartphones and Best Android phones

High-megapixel front-facing cameras are becoming increasingly common in smartphones. Traditionally VGA-quality or 2Mp at best, Microsoft recently announced its 5Mp Lumia 735 as the ultimate Windows Phone for selfies. Huawei’s Honor 6 also has a 5Mp selfie camera. HTC was quick to one-up the pair with this 13Mp monster.

As is always the way with the fast pace of technology, though, Oppo has since unveiled a 16Mp swivelling beast in the Oppo N3. All we need now is a 20.7Mp front-facing camera in the Sony Xperia Z4. (That’s not going to happen – don’t get too excited.)

Of course, it’s not just the a high number of megapixels that make a good photo; the spec and quality of the sensor is also important. And when it comes to shooting selfies, the range and capability of beautifying software tricks that can be applied is crucial. We’ll talk more about the HTC Desire Eye’s selfie skills under ‘Cameras’. Also see: HTC Desire Eye vs Nokia Lumia 735 comparison – What’s the best selfie smartphone

Plus, no matter how good is this phone at making you look pretty, it is also a phone: it should be able to comfortably handle any task you throw at it, from making calls and sending texts, browsing the web and listening to music, and playing games and communicating over social media. Luckily, HTC has all these bases covered with its Desire Eye.

At the time of writing the exact UK price of the Desire Eye was still to be confirmed, although HTC told us it would cost around £350 SIM-free but Carphone warehouse has revealed the price at £399. It will go on sale mid- to late-November.

If you want to get the HTC Desire Eye at the best price, also see our Best SIM-only deals.

The Desire Eye might not be as much of a looker as the One M8, but this round-edged slab of soft-touch plastic is very easy on the eye for a mid-range smartphone. It’s available in two-tone blue or white with a red trim.

Extremely thin bezels have allowed HTC to squeeze a 5.2in screen into a chassis just 152mm long and 74mm wide. Combine this with a featherlight 154g weight and the Desire Eye is quite comfortable to use in a single hand.

Given the twin 13Mp cameras, the Desire Eye is unbelievably thin at 8.5mm. This has been made possible by adopting a central position for the front camera, and top left corner for the rear. This also makes for less awkward-looking selfies than are seen from phones that demand you hold them in an unnatural postition and peer up at the top right corner of the screen.

That 5.2in screen is a full-HD (1920×1080) panel, with a pixel density of 423ppi. Text and images are very clear, and are displayed with natural colours. Viewing angles are excellent, too. We did find the display a little dull out of the box, however, so ramped up the brightness in the settings.

SIM and microSD slots are found on the device’s left edge, which is a giveaway to its IPX7 protection – it’s waterproof up to 1m. With no removable rear panel the Desire Eye’s battery cannot be replaced, but this does mean the phone feels very sturdy and won’t creak or bend under pressure. Plus, even under the stress of our battery benchmark the HTC remained cool to the touch.

On the top is a headphone jack, while a Micro-USB charging port is tucked away at the bottom. On the Eye’s right side is a volume rocker, power switch and dedicated camera shutter button.

The Desire Eye supports a range of useful motion gestures, one of which fires up the camera from standby when you pick up the smartphone and press the volume rocker. You can then press the dedicated shutter button and capture a shot within seconds, so you’ll never miss the moment.

Other gestures from standby include a double-tap to wake, right-swipe to launch BlinkFeed, up-swipe to unlock the phone, and down-swipe to access voice dialling.

HTC is well known for the decent audio quality of its smartphones, and with good reason. As with its Desire siblings, the Eye features BoomSound front-facing speakers. Unlike so many other smartphones on the market, this means that sound isn’t muffled as it is fired into the palm of your hand. The audio quality really is much better than what we hear from rival smartphone manufacturers. HTC preinstalls its own music player, as well as Google’s Play Music, plus an FM radio – not always a given these days.

The Desire Eye is very responsive and we experienced no lag when browsing the web, flipping through home screens or launching apps. However, it’s a £350 phone: we weren’t expecting to be quite so blown away by its performance in our synthetic benchmarks. (A cynic might suggest we take these with a pinch of salt.)

In Geekbench 3 its 2.3GHz Qualcomm Snapdragon 801 chip, 2GB of RAM and Adreno 330 graphics powered the HTC Desire Eye to a single-core score of 983 points, and a multi-core score of 3009 points. That means it’s faster than the HTC One M8 and Samsung Galaxy S5, and in the multi-core component it even beat the iPhone 6 Plus and Motorola Moto X. Only the Samsung Galaxy Note 4 is faster. Apparently. (Also see: What’s the fastest smartphone 2014.)

It wasn’t just in Geekbench that the Desire Eye stormed ahead of the competition. Its 588ms result in SunSpider is really very good for an Android phone, beaten only by Apple’s iPhone 5s, iPhone 6 and 6 Plus, and in the Android camp the Samsung Galaxy S4 mini and HTC One M8.

In the GFXBench 3.0 graphics test the HTC Desire Eye fell down slightly, with its still-very-good scores of 25fps in T-Rex and 11fps in Manhattan putting it a little behind those aforementioned flagships.

We also ran PCMark for Android. New to the Google Play store, for now there isn’t much with which we can compare the Desire Eye’s results in these tests. However, the HTC achieved an overall work performance score of 3714 points, breaking down to 3477 for web browsing, 3992 for video playback, 3227 for writing and 4245 for photo editing.

PCMark for Android includes a battery performance test, which cycles the work performance test until the battery hits 20 percent. It won’t tell you how many hours the HTC Desire Eye will last in real-world use, but it will provide a score that is comparable to other smartphones. Again, as we run more smartphones through this benchmark over the coming months this information will become more useful. In this test the HTC Desire Eye managed 5 hrs 28 mins.

We’d suggest the Desire Eye will last most users one full day away from the mains but, as always, your mileage will vary depending on your usage. Note that the HTC also has an Extreme Power Saving mode, which will turn off non-essential features to keep it going as long as possible once the battery hits either 20-, 10- or 5 percent remaining.

In terms of storage the Desire Eye has what is fast becoming the standard for mid- and high-end Android smartphones: 16GB built in, plus microSD support up to 128GB. You can also take advantage of cloud storage using Google Drive and other third-party apps.

The cameras are the key selling point for the Desire Eye. Not only is there a 13Mp f/2.0 camera with a dual-LED flash found at the rear, there’s also one at the front – but with a slightly wider f/2.2 22mm lens. This selfie camera is just like any smartphone’s primary camera, with support for HDR, slow-motion video, face detection that tracks up to four people in the frame, on-the-fly application of filters, live make-up (adjusted via a slider), manual settings and a timer.

Once you’ve taken your high-resolution selfie it will automatically flip around, offering you the view from other people’s point of view rather than that which you see in the mirror. You can flip it back if you prefer, as well as rotate, crop and straighten the image, and even doodle on top. Tweakable effects options include face fusion (allowing you to fuse your face with that of a friend, celebrity or animal, whatever floats your boat), skin smoothing, lighting, face contour (you can quickly lose 10 pounds), eye enhancer (be really careful here or you’ll end up with fish eyes), red-eye remover, eye brightener and anti-shine. Also here you can apply a different filter, and you can add a photo frame, although most of those available are pretty cheesy.

The Desire Eye can quickly and easily transform your selfie from something awful to something not bad. Clearly edited, but not bad. You just have to be very careful not to go overboard on the effects. Here are some examples (we try not to smile too much in the office in case we look like we’re having a good time).

All these options are also available to the rear camera, which you access with a swipe of the screen. Another swipe takes you to a split screen mode, which simultaneously captures the view from both cameras. The idea is that you can capture an event and your reaction to it. Other camera modes available from the menu are Photo Booth and Pan 360.

The image quality is perfectly acceptable for a smartphone, with true-to-life colours and little noise.

One thing we really didn’t like is the auto-playing slideshow in the Gallery. If you have the sound turned on it will also play some naff background music, refusing to remember that you have instantly switched this off everytime you’ve ever opened the Gallery.

The HTC Desire Eye runs Android 4.4.4 KitKat out of the box, but HTC says it will be ready to upgrade to Android Lollipop as soon as it is opened. This shouldn’t have too much of an effect on performance, but it may improve battery life. For more information on the differences between KitKat and Lollipop see our Android KitKat vs Android Lollipop comparison.

HTC overlays its Sense 6 interface, which includes the BlinkFeed widget. BlinkFeed is, according to HTC, ‘Your window to the world from your homescreen.’ In essence it is an aggregator for news articles you might like, social media updates, calendar appointments and more.

A few extra apps are preinstalled on the Desire Eye, including Stocks, Car, HTC Help, Kid Mode, HTC News and Power to Give (a distributed volunteer computing network), but the one we really wanted to try – and which HTC has been making big noises about – wasn’t available. Zoe, HTC’s collaborative video-editing software, is merely said to be coming soon. Nevertheless, available for iPhone and Android 2.3+ devices, Zoe is not exclusive the Desire Eye.