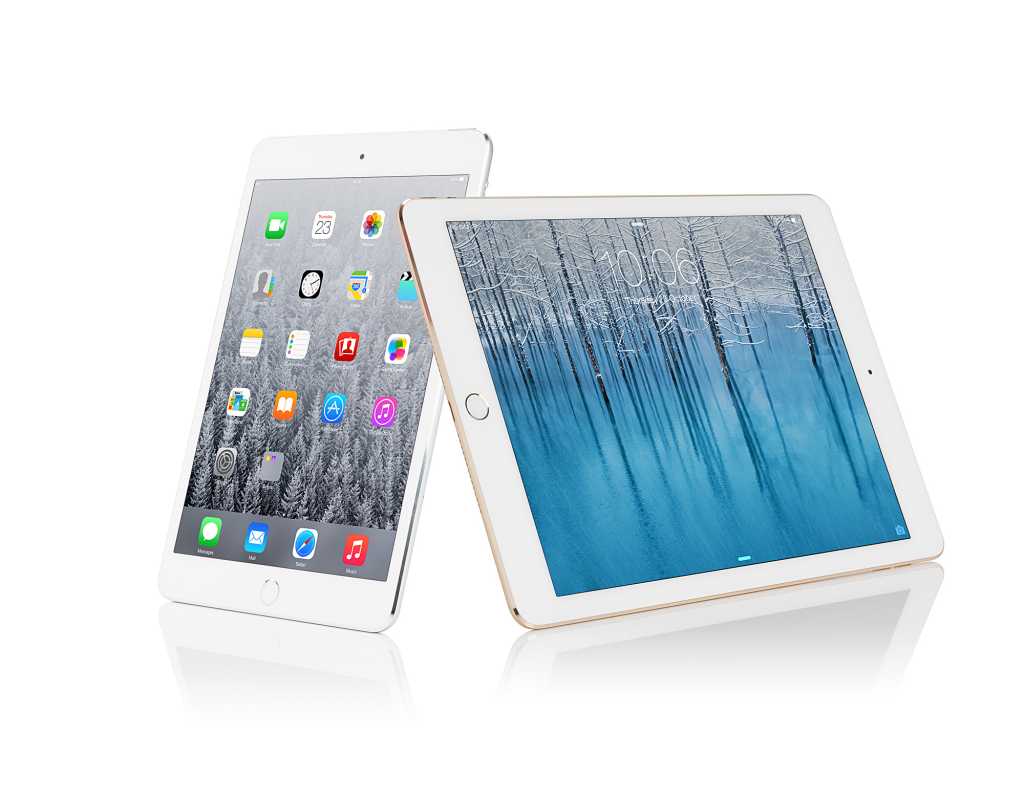 If you must have a Touch ID sensor on your iPad, then the iPad Air 2 is the best choice for most people. If you want a smaller screen with Touch ID, then your only choice is the mini 3. However, if you can live without this feature, the iPad mini 2 is much better value.

Just like last year, Apple unveiled two new iPads in October. Only one of them wasn’t really new. Here’s our iPad Air 2 and iPad mini 3 comparison.

The iPad Air 2 is Apple’s flagship tablet, if you will. It has a 9.7in screen, the latest A8X processor and is the thinnest iPad to date. The mini 3, reviewed, has a 7.9in screen but the only real difference to its predecessor (the iPad mini 2, or iPad mini with Retina display to use its original name) is the Touch ID sensor, also a new feature on the iPad Air 2.

If you head to Apple’s website, you’ll see the biggest range of iPads it has ever offered for sale, since you can still buy the previous generation along with the original iPad mini (which lacked a Retina screen).

Apple kept last year’s prices for the Air 2 and mini 3, while dropping the prices for last year’s models. The cheapest Air 2 costs £399 and has 16GB of storage (and no GPS receiver, just like all Wi-Fi only iPads).

The mini 3 costs £319 for 16GB and just Wi-Fi as opposed to the cellular model which lets you get on the internet on the move. That’s £100 more, the same premium commanded by the cellular iPad Air 2.

You’ve also got the option of 64GB or 128GB of storage with both new iPads, and that’s an extra £80 and £160 respectively, regardless of whether it’s the cellular or Wi-Fi model.

Obviously the iPad mini 3 is the cheaper option at every level, but it’s not the best value.

So, why is the iPad Air 2 better value? It’s because the new A8X processor is so quick. It outperforms the iPad mini 3’s A7 CPU by a big margin, as you can see in our full iPad Air 2 and iPad mini 3 reviews.

Not everyone will need the Air 2’s huge performance, but even then the iPad mini 3 isn’t the obvious choice. The reason for that is because you can still buy the iPad mini 2, which has the same processor, yet is £80 cheaper.

As you already know, the Air 2 has a 9.7in screen and the mini 3 has a smaller 7.9in display. Both have the same resolution, which is unchanged from their predecessors at 2048×1536. Both are excellent screens, and the iPad Air 2 now has a laminated display which makes the tablet feel more solid and sturdy than the original iPad Air, and also improves image quality slightly. (It also has a new anti-glare coating which helps to cut down on reflections a little.)

The Air 2 also has 802.11ac Wi-Fi which should provide faster file transfers when connected to a compatible router or hotspot. The iPad mini sticks with the 802.11n dual-band setup of its predecessor (and the iPad Air).

Finally, the Air 2 has a barometer for detecting changes in air pressure. This isn’t for weather warnings, though: it’s for detecting altitude so compatible apps can tell you how many flights of stairs you climbed, while carrying your iPad. (Bear in mind that iPads don’t have the new Health app found on iPhones with iOS 8.)

Cameras, not typically your first priority when choosing a tablet, have nevertheless been updated on the iPad Air, with the rear sensor getting upgraded from 5- to 8Mp. The difference in quality isn’t as great as you might imagine, but with the help of the new image signal processor, the iPad Air 2 can now shoot slo-mo video and photos in burst mode: features previously only on the iPhone 5s, 6 and 6 Plus.

Meanwhile, the iPad mini 3 has a 5Mp camera, capable of time-lapse and panoramas in addition to the usual photo and video modes. Both iPads have the same FaceTime HD camera with a 1.2Mp sensor.

If you must have a Touch ID sensor on your iPad, then the iPad Air 2 is “the best iPad”. It isn’t that the Air 2’s Touch ID is better – they’re identical – but the Air 2 has the faster processor, supports the latest Wi-Fi standard, supports faster LTE, has a higher-resolution rear camera which also gets new features: slo-mo and burst modes.

However, it’s more expensive, and the base 16GB model doesn’t provide enough storage for most people. That means it’s the 64GB version at £479 or £579 – depending on whether you want the cellular version or not – which is the real price here.

You could argue that the iPad mini 3 is aimed at less-demanding users for whom 16GB might be enough. Otherwise, it’s again the 64GB version at £399 or £499 (Wi-Fi or cellular) which you’ll need to buy.

But as we’ve already said, the iPad mini 3 isn’t necessarily a good buy. If you don’t need Touch ID, then go for the iPad mini 2 which is £80 cheaper and is available in a still-useful 32GB model for only £279 or £379 for Wi-Fi and cellular models respectively.

If you were considering the iPad Air 2, then bear in mind that the original iPad Air is still a fantastic tablet, and could be better value at £319 for the 16GB Wi-Fi version, or £359 for 32GB.