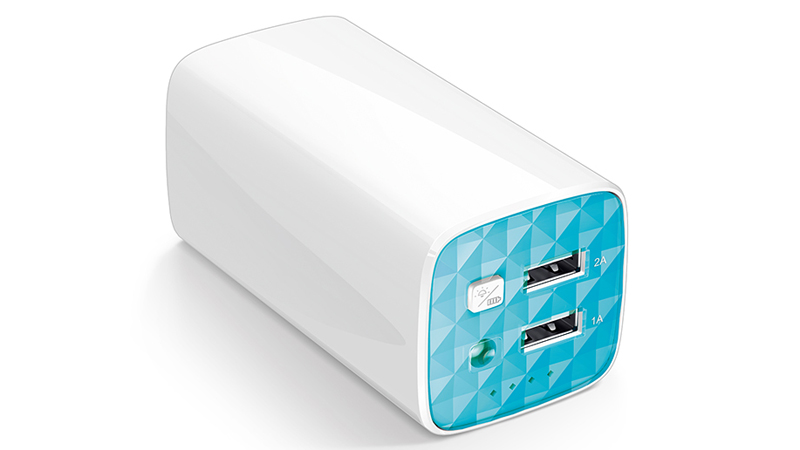 The TP-Link TL-PB10400 is a great-value power bank that has enough capacity to keep both your phone and tablet running away from the mains, while still being sufficiently portable to throw in a bag. Lumsing’s alternative is cheaper, and you may prefer its design, but this TP-Link will refill its own battery faster, it’s better at showing how much capacity remains, and it includes an LED torch. Both will make great travel companions.

TP-Link is well-known for producing quality tech at affordable prices, and its 10400mAh Power Bank is no different. It’s perfect for keeping your smartphone and tablet going on the move. Read our TP-Link TL-PB10400 review. Also see:  Best power banks 2018.

The TP-Link’s closest competitor is the slightly cheaper £17 Lumsing 10400mAh Power Bank. Both feature a 104000mAh capacity and two USB outputs – one rated at 1A for smartphones and the other 2.1A for fast-charging tablets and phones. You can plug a phone into this second output, of course – it will draw only the power it requires – but some tablets may not like the 1A output. Typically iPads.

All power banks lose some of their power through voltage conversion and heat, but with both the TP-Link and the Lumsing you should expect around 7000mAh to filter through. How many times this will charge your phone or tablet will depend on that device’s own built-in battery, and its age. For example, it should charge a brand-new iPhone 6’s 1810mAh battery about four times, but the higher capacity 2915mAh 6 Plus just two and a half times.

TP-Link’s power bank has some advantages over the Lumsing, though. Importantly, it has a 2A Micro-USB input. This means that with a similarly specced charger you can refill its battery in just seven hours. The Lumsing will take longer to charge over its 1.5A input. Given that neither support passthrough charging (which is to be expected at this price, but useful for enabling you to use the power bank as a USB hub and simultaneously charge both it and your phone or tablet), faster charging is an attractive feature.

The TP-Link has a built-in LED flashlight, too, which is turned on with a long-press of the status button. We’re not sure how useful this is, but it’s better to have than not to have – especially when you consider that many people require power banks for keeping their smartphone or tablet going during camping trips or other times when they are away from mains power and civilisation.

The TP-Link Power Bank is also better than the Lumsing at showing you how much power remains. Whereas nearly all power banks we’ve tested use a four LED system, whereby each LED represents 25 percent of the potential capacity and in some cases a huge chunk of power, the TP-Link’s fourth LED will blink when it gets down to 10 percent. That’s incredibly useful, and something we’d like to see with other portable USB chargers.

Hardware differences aside, the Lumsing and TP-Link look very different. Whereas Lumsing’s power bank is an elongated Harmonica-design bank, this TP-Link is short and squat, a chunky rectangular device made from glossy white plastic and with blue end caps. It looks nice and feels reasonably sturdy. Both weigh approximately 240g.

TP-Link supplies a soft carry case and a Micro-USB cable with the power bank. If you want to charge an iPad, iPhone or other device that uses a proprietary connector then you simply need to supply your own cable. Interestingly it says on TP-Link’s site that the TL-PB10400 Power Bank doesn’t support Samsung tablets. We were surprised by this, but didn’t have one to hand to test.