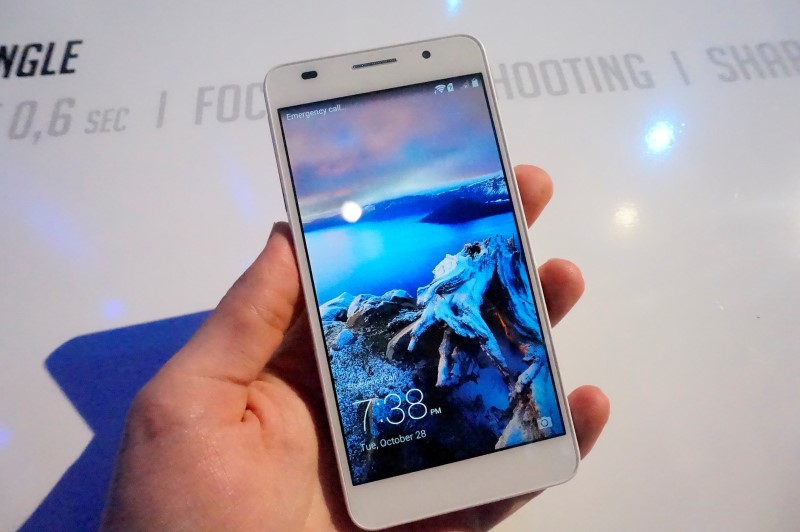 We’re seriously impressed by the Honor 6 which costs just £249 while providing specs you would normally pay a lot more for. It has a decent 5in Full HD screen, high quality cameras, good battery life, 4G support, good performance, expandable storage and wireless features like NFC and an IR blaster. The microSD cards slot is limited to 32 GB and Emotion UI isn’t the best Android software but these don’t stop the Honor 6 being the best value smartphone around.

Honor is a new name in  smartphones and we’ve taken a look at the first model to bear the logo. Here’s our in-depth Honor 6 review; it’s a phone which offers specs to rival Apple and Samsung at half the price. Also see: Best smartphones and Best Android phones.

The handset is built by Huawei, in much the same way that Motorola builds the Nexus 6 for Google.

You can buy the Honor 6 right now, but Amazon is the firm’s official launch partner and has the phone at a lower price than other sellers on the site. To get that price, you can pre-order it now at £249 for release on 10 November.

The device is 7.5mm thin and weighs 130g. It feels thin and light for a 5in phone and not far off the impressive Huawei Ascend P7. Honor says “The dazzling 3D diamond-style texture back cover is inspired by nature. A 6-layer high-complex surface treatment is made with special composite materials.”

That may be dazzling marketing speak, but the Honor 6 does look and feel quite nice – from a number of angles it has similarities with previous iPhones. However, it doesn’t have the same effect as the Ascend P7. It would feel more expensive than the price suggests if it weren’t for the fake metal sides which look like they’ve been spray painted by hand.

The SIM-card and microSD card slots are hidden under a flap on the side but don’t let this fool you into thinking the device is waterproof because it’s not. A notification LED sits on the front of the phone at the top.

The black model actually has a much nicer brushed effect on the sides which looks far more stylish. We’re not a fan of the glossy coating, though. This combined with front and rear glass makes the Honor 6 a slippery customer.

Like its cousin, the Ascend P7, the Honor 6 has a 5in IPS LCD display with a Full HD resolution meaning a pixel density of 441ppi – and that’s more than fine with us for a mid-range phone (it’s higher than the iPhone 6 Plus’ pixel density). It looks great and has decent brightness which is often the downfall of a cheaper handset.

Under that ‘dazzling’ exterior is a Kirin920 processor which is an octa-core chip – another surprise for a smartphone this cheap. It has four 1.7 GHz A15 cores and four 1.3 GHz A7 processors for a combination of power and efficiency. It’s also the first octa-core 4G CAT6 SoC (system on a chip).

The phone also has a Mali-T628 GPU, 3GB of RAM and a built-in co-processor i3 (not Intel) which can manage external sensors when the phone is in standby mode. Our first impression is that the Honor 6 is nicely smooth and responsive and this has also been the case after more than a week of time with it. The only problem we’ve had was a loop of endless ‘sorry the app has stopped’ messages which only took a reboot to fix and looks like a one-off.

The good performance is backed up by benchmark results which you can see below compared to the new iPhone 6 and the older but similarly priced Nexus 5. It did particularly well in Geekbench 3 with only the Galaxy Note 4 scoring higher. The graphics results aren’t great but we’ve had no issues with gaming.

Storage options are 16- or 32GB (although Amazon only offers 16GB at the moment) and there’s a microSD card for adding up to 32GB memory cards.

On the wireless front the big feature here is Cat 6 4G LTE which provides up to 300Mbps (although remember that is just a theoretical speed and you probably won’t see any difference to Cat 4 at the moment).

The Honor 6 also has dual-band 802.11n Wi-Fi, Bluetooth 4.0, GPS and NFC. As we suspected, there is an IR blaster for use with Smart Control but we have no such app on the phone we were sent for reviewe. We’re waiting to hear back but there are various free ones you can download anyway.

Coming back to efficiency, Honor touts a whopping battery life of 2.7 days for the Honor 6 from its 3100mAh battery. It also has the Ultra Battery Saving mode seen on the P7 which will give 24 hours use from 10 percent charge.

We haven’t quite seen 2.7 days of battery life but it definitely lasts two which is a good result by today’s standards.

Despite that affordable price, the Honor 6 offers flagship specs in the photography department. At the back is a 13Mp rear camera which uses a fourth-generation Sony sensor, has a dual-LED flash and supports HDR (high dynamic range), although it has electronic- rather than optical image stabilisation.

You’ll use the Smart mode most of the time but there’s also Beauty, Filters, Panorama, Best Photo, Audio note and others to play around with.

The firm claims it’s the fastest at taking photos at just 0.6 seconds. You can handily take photos without needing to switch the screen on by double tapping the volume down – you just need to be good (or lucky) at aiming the camera.

Image quality extremely good considering how much this phone costs and although the speed shooting doesn’t hit 0.6 seconds most of the time, we did experience it at least once. As standard, it shoots at 10Mp and 16:9 but you can use all 13Mp if you’re happy with an aspect ratio of 4:3.

Following on from the HTC One M8‘s lead, the Honor 6 offers a focus mode which lets you select the area of focus in a photo after you’ve taken it. It works pretty well but you’ll need to make sure there are no moving objects in the shot and you compose it to suit the feauture. Strangely you can only change the focus on shots in portrait mode.

For selfies, or Skype chats, there is a decent 5Mp camera with a wide-angle lens. There are some of the above camera modes, too, including panoramic for group shots. The first couple of times we used the front camera we encountered strange graphics interference lines but they soon went away.

On the video side of things, the phone shoots at 720p by default but this can be ramped up to Full HD 1080p in the settings.

The Honor 6 comes pre-loaded with Android 4.4 KitKat and Huawei’s Emotion UI 2.3. The firm has promised periodical software upgrades which will be based on consumer feedback via its website or social media channels. We assume it will get Android 5.0 Lollipop, but there’s no guarantee.

Huawei’s Emotion UI is smooth and simple, although we’re not a big fan of the way the app tray/menu has been ditched. This means all your app icons are on the homescreen like iOS so things get cluttered unless you organise everything into folders. Some people will love this, of course.

One thing we like about Emotion UI compared to rivals is the huge number of themes you can choose from which change the entire look of the interface including app icons. Unfortunately, this is nowhere to be seen on the Honor 6 which is a big shame.

The lockscreen will display different (and mostly gorgeous) photographs each time you wake the Honor 6 up. You can, of course, choose your own permanent image if you like. There’s also a handy quick settings bar much like the Control Centre in iOS which is accessible with a swipe from the bottom of the screen.

Recent apps is standard issue and the dropdown bar is split into two sections: notifications and shortcuts although a better name for the latter would be settings. Here you can adjust screen brightness and toggle functions like Wi-Fi and GPS but also access things like the torch and Ultra battery saving mode. It would make sense to display notifications in the space below but you can switch between the two sections with a horizontal swipe.

It appears the the phone comes with a bunch of games pre-installed including Asphalt 8, Real Football 2015 and Spider Man. However, some are demos (Spider Man, Bubble Bash and Real Football) and you’ll need to download 1GB of data to play Asphalt 8. The only game we could just load up and play was Dragon Mania.

Other pre-loaded apps include Bitcasa (cloud storage), Kingsoft Office, Highlights (an app store of sorts) and HiCare which is a customer service and feedback app.