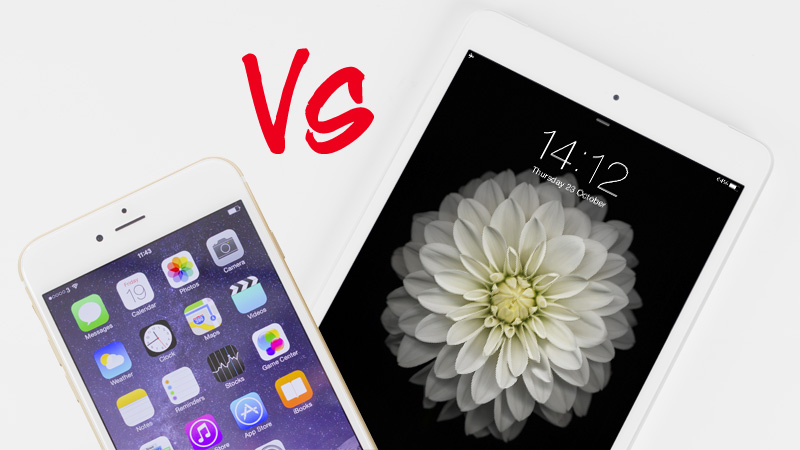 While the iPad mini 3 is much cheaper, it’s actually not particularly good value when compared to the mini 2, and the iPhone 6 Plus is far more functional and has much better hardware.

It seems like a strange comparison – a phone and a tablet – but not really. The iPhone 6 Plus is massive for a smartphone, and the iPad mini 3 is tiny for a tablet, so do you really need both and, if not, which is best? We compare the specs in our iPhone 6 Plus vs iPad mini 3 comparison.

The iPhone 6 Plus is available from £619 with 16GB of storage, while the 64- and 128GB models will cost you £699 and £789 respectively. If you can’t afford to buy the iPhone 6 Plus straight out then you will likely be tempted to pay a smaller amount upfront and get it on a contract. You will pay more in the long run this way, though – see Best SIM-only deals.

The iPad mini 3 is a not insignificant £300 cheaper, at £319, £399 and £479 with the same storage capacities. Even if we add 4G connectivity to the mix to make this a fairer comparison the iPad mini is still £200 cheaper than the iPhone 6 Plus.

So it might seem like a strange point to make that the iPad mini 3 is overpriced. The only differences between it and the iPad mini 2 are the Touch ID fingerprint scanner, the availability of a new gold colour, and the removal of a 32GB storage option. Save yourself £80 and buy the iPad mini 2 – or £120, and get a refurbished model from Apple’s store.

Both being Apple products, you can expect excellent design and build from the iPad mini 3 and the iPhone 6 Plus. But while the 134.7×7.5x200mm, 341g mini 3 is the perfect size for a tablet that you can throw in a bag and carry around, then use to browse the web, read a book, watch video and play games, the 158.1×7.1×77.8mm, 172g iPhone 6 Plus is simply enormous for a smartphone. Also see: Best tablets and Best smartphones.

Ignoring the fact you need monster hands to comfortably use the iPhone 6 Plus one-handed, it’s too big to slip into a trouser pocket – even in a jacket pocket it’ll poke its head out the top, screaming “Steal me.” And you really shouldn’t have to carry your smartphone in your bag. That’s a criticism that’s true of all phablets, but the iPhone 6 Plus is taller than many rival 5.5in-screen Android phablets we’ve seen.

The 6 Plus is also the first Apple device in a very long time at which you don’t need to look especially hard to find flaws. The camera protrudes slightly from the rear, meaning the phone rocks rather than lies flat on the table. The power and volume buttons fall under your finger or thumb (depending on which way you hold it), making it all too easy to accidentally press both. And then there’s bendgate, hairgate…

In this category, then, despite using the same chassis as the iPad mini 2 (save for the addition of the new Touch ID fingerprint sensor), the iPad mini 3 is really starting to look good against the iPhone 6 Plus. Both devices come in gold, silver and space grey.

Whereas the mini adopts a 4:3 aspect ratio, the iPhone 6 Plus uses 16:9 widescreen. So despite having the larger screen, when viewing video in landscape there’s not as great a difference as you would expect – yes, the iPad mini can provide a larger picture when viewing video full-screen, but you’ll lose any information to the left and right sides of the display. Either that or you end up with black bars at the top and bottom. Plus, with the iPhone’s 1300:1 contrast ratio and higher pixel density, you may find you prefer the way video looks on its smaller screen.

For gaming and web browsing the iPhone 6 Plus’ screen is usefully large, but you would still prefer to use the iPad mini 3 for these tasks if you had one to hand.

iPhone 6 Plus vs iPad mini 3 comparison: Hardware and performance

The iPhone 6 Plus is the clear winner in the hardware and performance category, significantly faster than both the iPad mini 3 and any smartphone we’ve ever tested. (See: What’s the fastest smartphone 2014.) That’s because it uses the brand-new Apple A8 processor and M8 motion coprocessor, while the iPad mini 3 is stuck with the previous-generation A7 and M7.

It’s important to note that you won’t find either device slow, and most users are unlikely to even notice a difference. But our synthetic benchmarks prove that the iPhone is the faster of the two.

iPhone 6 Plus vs iPad mini 3 comparison: Storage, connectivity and extras

In terms of storage both devices come with either 16-, 64- or 128GB built in, and neither has a microSD slot to add more. Both can make use of cloud storage, however.

Only the iPhone features the latest 802.11ac Wi-Fi and NFC (for use with Apple Pay), while 4G connectivity is an optional extra on the mini 3 (adding £100 to the price). If you plump for the cellular iPad option you’ll find an Apple SIM is already present, meaning you can choose whichever mobile operator is offering the best deal in the settings. You can replace it with a SIM of your choice, though.

The big new thing in the iPad mini 3 is the Touch ID fingerprint sensor, also seen in the iPhone 6 Plus.

A major plus point of the iPhone 6 Plus over the iPad mini 3 is its camera. Although both feature front- and rear cameras, you’re far more likely to use a phone than a tablet to take a photo, plus the iPhone’s rear camera is better-specified.

The iPhone 6 Plus’ 8Mp iSight (rear) camera specifies large 1.5-micron pixels and an f/2.2 aperture. The improved image signal processor in the new A8 chip means ‘Focus Pixels’ can provide the sensor with more information about a scene, allowing for a faster and improved autofocus. There’s also improved face detection, exposure control, auto- and optical image stabilisation and a panorama mode. The 6 Plus’ video recording is pretty good, too, with support for full-HD (1080p) at 60fps, slo-mo at 240fps, time-lapse video, continuous autofocus and cinematic video stabilisation.

By comparison the iPad mini 3 features older technology: a 5Mp iSight camera and the older image signal processor found in the A7 chip. Its five-element lens has an f/2.4 aperture, and the mini 3’s camera supports useful features such as HDR, panorama and face detection. It can also record video at 1080p, with support for time-lapse, face detection and (electronic) video stabilisation.

Both feature a FaceTime (front) camera specified at 1.2Mp and able to capture 720p HD video, but they are slightly different. With the iPhone 6 Plus Apple lists Auto HDR, a Burst mode and improved face detection – none of these are available on the mini 3 (it merely has ‘face detection’).

Both these devices run the latest iOS 8.1 operating system, and any updates will be simultaneously made available to iPad and iPhone. The software is almost identical, with a couple of exceptions.

Firstly, a tablet such as the iPad mini 3 can not make phone calls. Yes, you can use VoIP services such as Skype and – with those friends who also use iOS devices – FaceTime, but you cannot make actual phone calls through your mobile operator’s cellular network.

That goes for text messages, too. The iOS Messages app is supported on both iPad and iPhone, but if your recipient isn’t using an iOS device then you can’t text them from your iPad. The only exception to this is for those who own both an iPhone and iPad, as iOS 8 now allows you to send SMS messages from your iPad via your iPhone. But of course, we’re helping you choose one or other here, so that’s not hugely relevant.

We’ve already mentioned the differences with the camera software; another key change is the inclusion of Apple’s new Health app, which collates various data from sleep and nutrition to body measurements and fitness to monitor your health. Or not, as is the case with the iPad mini 3. That sort of makes sense, given that your iPad will not be by your side every second of the day, measuring every step you take. But it’s interesting to note that you don’t even get the choice of installing the Health app from the App Store.

So, should you buy the iPhone 6 Plus or the iPad mini 3? If it were my money I’d say neither. The iPhone 6 Plus is a very good phone, but it’s not for everyone – it’s certainly way too big for me. Meanwhile, the mini 3 is poor value when compared to its predecessor – yet still £200 (£300 without 4G) cheaper than the iPhone. That’s probably not the answer you’re looking for, though. If you want to know which device you should choose if you could have only one, and it had to be one of these two, the answer has to be the iPhone 6 Plus.

While you might prefer to use a tablet for certain tasks, such as web browsing, playing games and reading books, it can’t be ignored that whereas a phone can do everything a tablet can, the opposite is not true. By choosing the iPad over the iPhone you lose the ability to make phone calls (actual phone calls, not FaceTime and Skype chats) and send text messages to users of any mobile operating system other than iOS. You’re probably less likely to make use of the cameras, too – and the iPhone’s are much better.

Neither do you get HealthKit on the iPad, which may not bother you, but it cements the fact the iPhone is the more functional – if not always the more practical – device. For reading, web browsing, playing games and, arguably, watching video, the mini 3 is more attractive.

Technology-wise the iPhone 6 Plus is more powerful than the previous-generation hardware found inside the iPad mini 3 – you might not notice a difference, but the tablet’s hardware will become outdated sooner.

So while the iPad mini 3 is much cheaper, it’s actually not particularly good value when compared to the mini 2, and the iPhone 6 Plus is far more functional and has much better hardware.