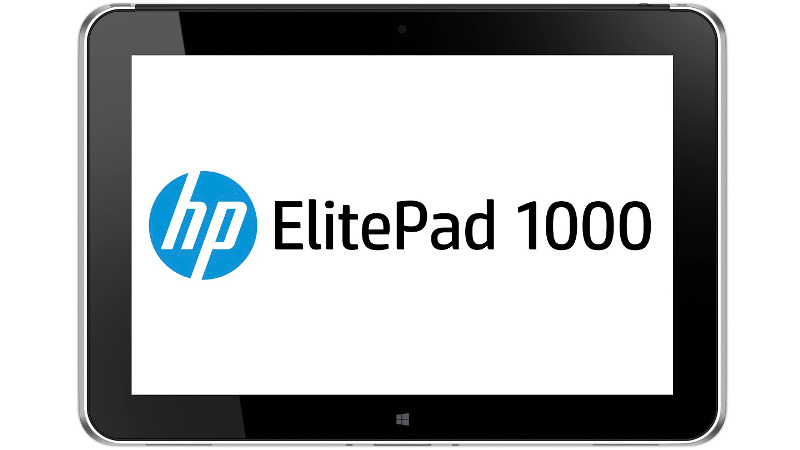 If you need to work with Windows programs and need a totable tablet with almost usable battery life, the ElitePad fulfills the job. As a first-choice device that can serve in a laptop role too, it’s rather underpowered and will have you yearning for the power of even a budget laptop.

The ElitePad is HP’s answer to the iPad, a Windows tablet aimed specifically at business users. It has a 10.1-inch widescreen touch display, effectively equalling the regular iPad Air in size, and runs Microsoft Windows 8.1 Pro.

HP doesn’t get off to a great start in promoting this Windows tablet. The company bizarrely pitches the ElitePad as ‘one of the thinnest tablets in the industry at 9.2 mm’. Which would have been true if its only competition had been the original iPad of 2010. But excepting some Google-based slabs, we’re not aware of many tablets that are quite as thick as HP’s actual thickness of 9.6 mm, let alone the 9.2 mm from the spec sheet. (See also: The best tablets.)

Even the chunky Microsoft Surface over its three iterations undercuts the burly ElitePad, just, in the thickness wars.

Powering the ElitePad 1000 is a new Intel Atom processor,  a quad-core Z3795 running at 1.59 GHz. This is from Intel’s Spring 14 collection, and along with other low-power netbook-inspired Atom chips has finally been updated to a 64-bit architecture. Ironically given its use here, the new chip was initially groomed for use in Google Android devices.

System memory comprises 4 GB of low-power DDR3 RAM, clocked at a lowly 1067 MHz, the fastest memory that the Atom processor can use. Storage capacity options are either 64 or 128 GB, and the two models are priced on the HP website at £712 and £792 including VAT.

It’s worth noting that the flash drive inside is not a high-performance SSD as found in regular PCs and laptops, but the low-speed eMMC type as fitted in smartphones. (See also:  Which laptop to buy: laptop buying advice, and the best laptop reviews.)

The aluminium case encircles the edges of the tablet, in a style just like the first iPad. This tablet has a 16:10 aspect ratio display, a useful compromise between the 4:3 iPad and the widescreen 16:9 screens that most Android tablets and Windows laptops now use. The ElitePad is designed to be orientated mostly in landscape mode, with the Windows logo at the bottom of one long edge, and a plastic trim piece on the top at the back, to give radio access to the wireless aerials for Wi-Fi, Bluetooth and 3G modems.

With its Windows 8.1 operating system, we found general tasks cumbersome to complete using the touchscreen alone. The relatively high screen resolution means that buttons and controls in the traditional Windows desktop are tricky to finger-tap accurately. A stylus is offered, the Executive Tablet Pen G2, which gives more precise pointing but is not without its trials.

Tapping the screen to launch a program, for example, there was often no response. Due to the general lag in the interface, and intermittent feedback to show that the tap was recognised, it was sometimes difficult to know if the tap registered correctly.

The sample of ElitePad 1000 we were loaned included a useful set of accessories available for this model. An HP ElitePad Docking Station desktop dock can support the tablet on the desk at a slanted angle like a laptop, and adds extra connectivity – four USB 2.0 ports and audio minijack on the sides; and ethernet, HDMI and VGA ports on the rear.

Used with the HP Bluetooth wireless keyboard and mouse of your choice, you can get a passable version of a working laptop setup.

There are no USB ports on the tablet itself, just a slot for an microSDXC card and a proprietary multi-pin dock. But a dongle in the box connects to that dock port to give you a makeshift USB 2.0 connection.

Finally, there’s a battery case available, which fits around the tablet (and requires screws to hold together). This also includes two USB 2.0, HDMI and full-size SD card slot. This HP Expansion Jacket Battery adds 21 Wh of  lithium-ion power to the tablet’s own 31 Wh internal battery. (For more on this, see also: Best laptops you can buy.)

To get an idea of the raw performance of the new CPU and its memory, we used the cross-platform Geekbench 3 benchmark tool. In single-core mode the ElitePad scored 1026 points, while multi-core only moved this up to 3310 points.

For context, these results are comparable to and just ahead of a fast Google Android smartphone such as the Motorola Moto X (998/2975 points). But this Intel quad-core processor is a long way behind the best ARM mobile chips, such as that in the iPad Air 2 which scores around 1815 and 4505 points in this benchmark.

In PCMark 7, the ElitePad returned a result of 2535 points, a rather low score in laptop terms at least. PCMark 8 results of 1266 points in the Home scenario, and 1555 points in Work also suggest this tablet is somewhat slow in PC terms. A £349 budget Toshiba Satellite laptop recently scored 1883 and 2240 points respectively in the same test.

Given the quad-core x86 processor which we’d expect to have a better turn of speed, we tested the performance of the internal flash drive to see if that may have been pulling down overall PCMark results. (Both PCMark 7 and 8 quite rightly do test storage speed and factor this in final scores.)

Inside the HP ElitePad is a SanDisk SEM128 flash drive. This is a low-cost, low-power eMMC solution, based on the SD card used by cameras and Android phones.

In our tests, it had a top sequential read speed of 87 MB/s and write speed of just 26 MB/s. Its small-file performance was down at around 8 MB/s read and 3.5 MB/s write for single-thread 4 kB random IO; and at queue depth of 32, this rose to 10 and 4.3 MB/s respectively. By our calculations, its best IOPS would be around 2500 IOPS.

Several of these figures are some way behind what even old hard-disk technology can provide – a modern laptop hard drive will return >100 MB/s for its sequential read and writes. The eMMC flash drive does outperform a hard disk in its 4 kB figures though.

Given how vital storage speed is to system performance and the subjective feeling of the interface, it was no longer surprising that the ElitePad felt and measured so slowly.

This tablet may not be aimed at home users, but we tried a Windows game to get an idea of its graphics performance. In the Stalker: Call of Pripyat game, the ElitePad could just play the game, at a very low framerate – an average of 10 fps using modest 1280 x 720 resolution and Medium detail settings. Clearly when it comes to games entertainment, Intel’s new silicon is not up to the job.

Display quality was more satisfactory, if only able to reproduce 70 percent sRGB gamut and 53 percent Adobe RGB. Contrast ratio measured in a chequerboard test was around 650:1, peaking at 700:1 at a nominal 75 percent brightness (300 cd/m^2). Maximum available luminance output was 338 cd/m^2.

Battery life was tested with our standard looped video rundown test, an MPEG-4 video played over a Wi-Fi network with screen set to 120 cd/m^2. The ElitePad lasted for 8 hour 42 min. Standby time was poor though. After a full charge the battery was drained after a weekend of inactivity.

Adding the 431 g battery case to the tablet is said to extend total running time to 20 hours. Based on our test with the internal battery alone, our calculations suggest a total runtime closer to 14.5 hours. That’s not a bad figure, although the tablet assembly alone is by now a weighty 1.1 kg, not including the dock or keyboard. (See also: The best tablets.)