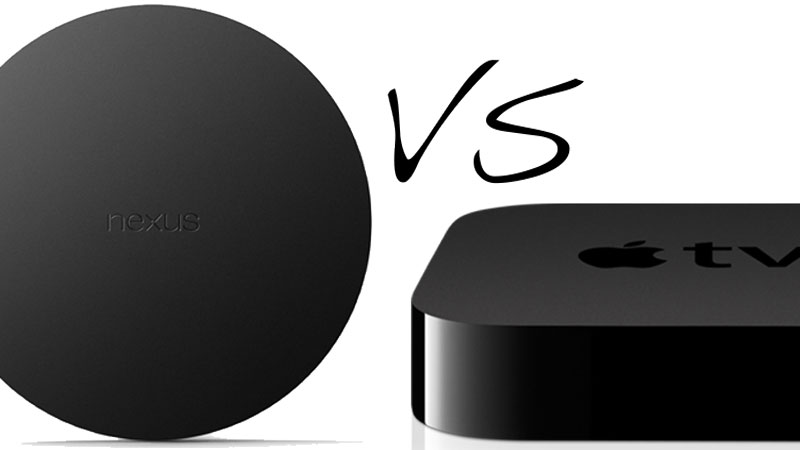 The Nexus Player is an exciting entry into the media streaming space, and we think it’s going to be a very popular product, particularly for those already using Android devices. We hope that it prompts Apple to update its old and outdated Apple TV, but for now there’s no denying that the Nexus Player has several features that help it beat the Apple TV, including the gaming features, the up-to-date connectivity options and the voice control.

The Nexus Player has been available in the US from 3 November, and is making its way to the UK this week. We can’t wait to get our hands on the device for thorough testing, but in the meantime we are comparing the two based on information provided to us by Google. We’ll update this article once we’ve completed our full review of the Nexus Player.

The Apple TV, on the other hand, hasn’t been properly updated since 2012, and it’s widely rumoured that a new version will be released at June’s WWDC.

The first difference you’ll notice between the Nexus Player and the Apple TV is the design. Apple’s set-top box is square with rounded edges, while the Nexus Player is completely round and reminiscent of a hockey puck.

Taking a closer look, you’ll find that the Nexus Player is 120mm x 120mm and 20mm thick, and weighs 235g (but you’re unlikely to notice the weight as you’ll pop it onto your TV stand).

Both are only available in black, but we think they’re both attractive devices that won’t take up much space on your entertainment unit.

The remote controls on the Apple TV and Nexus Player are similar, too. The Apple TV remote is silver, with a black click wheel like the one found on Apple’s old iPads, a menu button and a play/pause button. It’s small and stylish.

The all-black Nexus Player remote also has a click wheel, a back button, a play/pause button and a circle button (we’re not yet sure of its purpose). At the top of the remote is a mic button and built-in microphone that lets you use voice commands to search, something the Apple TV misses out on but is rumoured for a future generation that could arrive as soon as January 2015.

Both of these streaming set-top boxes make your TV smart. You’ll get access to services such as Netflix (though the subscription fee is not included, of course), Amazon Prime Instant Video, YouTube, Vevo and more.

We haven’t yet got the full list of channels that’ll be provided by the Nexus Player in the UK, but the Apple TV offers the following:

In addition, you can buy TV and movies from the respective stores to watch on your TV through the Nexus Player and Apple TV. You’ll be able to watch anything you’ve purchased or rented from the iTunes Store on Apple TV or the Google Play Store on Nexus Player.

Both the Apple TV and Nexus Player also let you play music or other audio from a mobile device through your TV. With the Nexus Player, you’ll get more flexibility, as it’s not just Android devices that are supported. You can Cast from iOS, Mac, Windows laptop or Chromebook, too.

The Apple TV is limited to AirPlay, so only works with iOS devices and Macs.

In addition, AirPlay lets you stream any other content displayed on your iOS device or Mac straight onto the bigger screen of your HDTV, including games.

Where Google’s Nexus Player differs is in its gaming capabilities. You can’t play games directly on the Apple TV, but with the Nexus Player and an optional $40 gaming controller, you’ll be able to play games downloaded from the Google Play Store right on your TV through the set-top box rather than simply mirroring the game onto your TV from your tablet or smartphone.

Plus, you’ll be able to sync achievements across your various Android devices including the Nexus Player to track your progress.

We’ve not had a chance to try Android TV for ourselves yet, but we imagine that it’s better than the current Apple TV interface, which is fairly easy to use but doesn’t offer recommendations like the Android TV does, and as mentioned above lacks the voice search capabilities.

The Apple TV has a HDMI port, so you’ll be able to connect it to a HDTV. There’s a built-on IR receiver to work with the remote control, Bluetooth support for the Apple Wireless Keyboard, and WiFi, though not the faster 802.11ac standard (likely because the Apple TV is more than two years old).

The Nexus Player also offers HDMI out, but unlike the Apple TV it has 802.11ac WiFi.

The Apple TV is powered by a single-core A5 processor, while the Nexus Player has an 1.8GHz Quad Core Intel Atom chip.

The Nexus Player will cost £79 in the UK, making it £20 more expensive than the £59 Apple TV. However, we could see the Apple TV get a price hike to its previous £79 once it is updated this summer.

The Nexus Player is an exciting entry into the media streaming space, and we think it’s going to be a very popular product, particularly for those already using Android devices. We hope that it prompts Apple to update its old and outdated Apple TV, but for now there’s no denying that the Nexus Player has several features that help it beat the Apple TV, including the gaming features, the up-to-date connectivity options and the voice control.