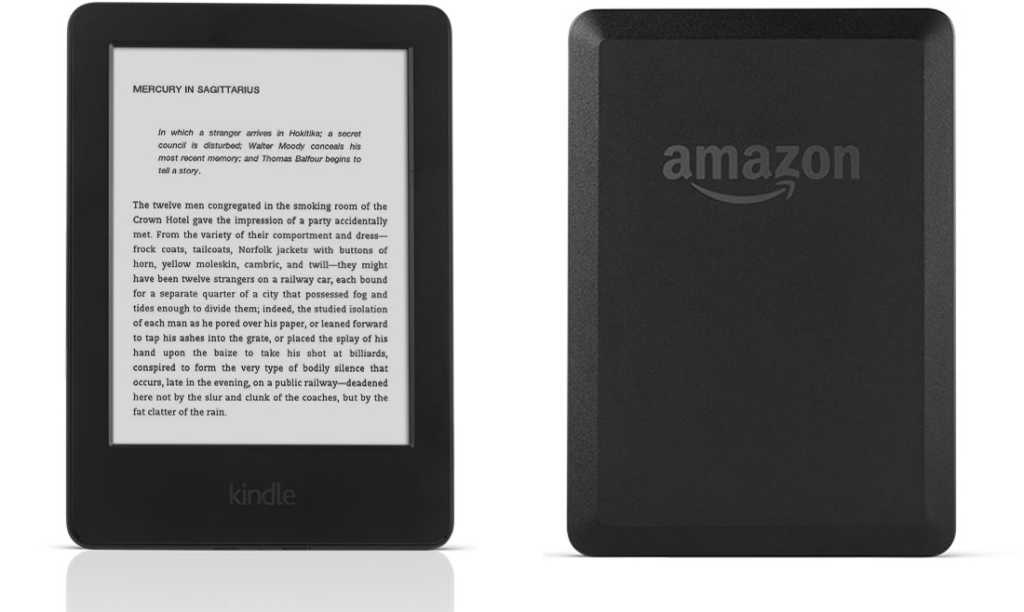 The Kindle remains a great eReader, but with the launch of Amazon’s £49 Fire tablet, it’s hard to see £59.99 as a bargain price. If you can live with reading on an LCD screen – which effectively means indoors – then the Fire is a great deal. But if you’re a bookworm and don’t mind the absence of a screen light, the Kindle is still the best sub-£60 eReader out there.

Once upon a time, Amazon’s Kindle eReader with a touchscreen would set you back £109. But the 7th generation Kindle is essentially the same as the older Kindle Touch yet costs almost half the price.

Update October 2015: Almost exactly a year after launching the 7th-gen Kindle, Amazon has announced a new white version. It costs the same, and has the same specifications as the black model. The casing is the only difference.

The Kindle costs £59.99 from Amazon, but if you can’t live with special offers on the lock screen it’s £10 extra at £69.99. You must decide which you want when purchasing.

Apart from the fact that it’s black rather than graphite in colour, and has bevelled rear edges like Amazon’s current Fire tablet range, the latest Kindle is really no different to the 2011 Kindle Touch. It has the same 4GB of memory (twice that of the outgoing non-touch Kindle) which is enough for thousands of books.

It has the same 6in screen with the same 800×600 resolution, equating to 167 pixels per inch. That’s low by today’s standards but on a 16-level greyscale E-Ink screen, it really doesn’t need to be much higher. Sure, characters are sharper on the 212ppi Paperwhite (and even crisper on the brand-new 300ppi Voyage) but it isn’t going to prevent you enjoying a good novel.

What’s changed is an even faster processor which speeds up page turns. They’re fast enough now that you don’t really notice the page refreshing – it’s certainly a world away from those early E-Ink screens that would take a second or so to refresh the image.

The touchscreen element is as responsive as you’d expect from a modern tablet, and you can use gestures such as swiping to ‘unlock’ the Kindle (necessary to remove the lock-screen adverts unless you’ve paid the extra £10 to remove them), and scrolling through menus or web pages.

Anyone thinking of upgrading from a non-touchscreen Kindle will appreciate just how easy it is to type in search queries when looking for a new book in the Kindle store – or simply searching the on-device library. The same goes for typing in Wi-Fi passwords and making notes. You can tap away as fast as you like, and the Kindle will keep up.

It’s a shame that Amazon hasn’t managed to make the bezels at the sides any thinner, as it would make it easier to hold the Kindle in one hand. In fact, it’s odd that this new model is a few millimetres bigger in all dimensions than the old non-touchscreen model. That’s the opposite of improvement in our book. And at 190g, it’s also 20g heavier. It’s still light enough to hold for long periods but it’s disappointing nonethless.

In terms of software features, don’t expect any difference from your current Kindle – if you’ve kept it up to date that is. Amazon has added features quite regularly, and one particularly useful one is Freetime. This works in a similar way to Amazon’s Fire tablets. You choose which books each child can read (there’s no limit based on age rating), and the child can earn badges when they hit their reading targets for one or more days. You can set the daily reading goal, such as 30 minutes, so the whole experience is customisable. FreeTime also blocks off the web browser, Wikipedia lookup and also stops them from buying books from the store.

Kindle Unlimited is a subscription service which costs £8 per month. It’s akin to Netflix – you subscribe on a monthly basis and get access to a vast catalogue of books while your subscription is active. As well as ebooks, the subscription includes audiobooks. The problem is that this Kindle doesn’t have a speaker or a headphone socket (like the old Kindle Touch), so you’ll need another device such as a tablet or laptop to benefit from the audiobooks.

The battery lasts for weeks if you read for short periods each day, making it much better than a tablet if you only want to read books, and charges in roughly four hours from a laptop or PC’s USB port.

Amazon has designed leather and PU cases for the new Kindle, so you can add a splash of colour. There’s the same garish yellow and magenta options as for the Fire HD 6 and 7 tablets, plus red and purple (and black if you don’t want colour). Both versions turn on the Kindle when you open them – a handy feature – and the black leather will cost you a hefty £35 while the coloured PU versions are (a still hefty) £25.

Amazon Kindle (7th generation) review: How it fares in 2015

It’s a little strange that Amazon hasn’t dropped the price of its cheapest eReader. While £59 isn’t bad, there’s no charger in the box and the brand new 7in Fire tablet costs only £49.

It’s a little unfair to compare an eReader with a tablet because they are two completely different beasts. A tablet is a multipurpose entertainment device whereas the Kindle is dedicated to reading. And if you’re an avid reader, you’ll prefer the zero-glare screen and long battery life.

And if you have decided to go for an eReader over a tablet, the Kindle beats other eReaders with its software features. Word Wise shows definitions of tricky words automatically for kids, and you also get X-Ray, Page Flip, the built-in dictionary and Wikipedia lookup which make it a more complete reading experience than you’ll get elsewhere. It’s also the small touches, such as the ‘Time left in chapter’ which make reading that bit better on a Kindle. Plus, there’s Amazon’s massive book selection and generally low prices.

There’s more competition on hardware these days, though, so if you want a eReader with a lit screen – arguably the only important feature missing from the Kindle – you you should look to buy a second-hand Kindle Paperwhite for around £60.