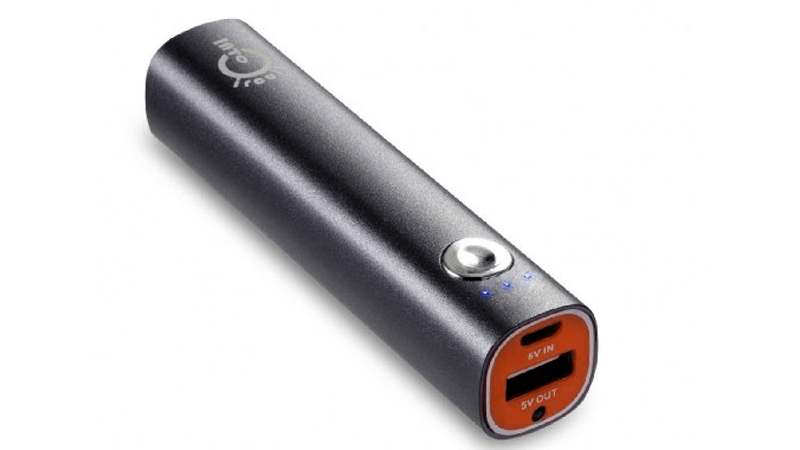 If you need a truly portable power bank for daily top ups, you won’t find a better deal than this Intocircuit PowerMini 3000 Power Bank. Cheap, well built, easily pocketable and with enough capacity to fill most smartphones once, the only drawback is in remembering to recharge the power bank itself after each use.

With increasingly powerful processors and larger, higher-resolution screens, keeping your smartphone going all day while away from the mains can be a challenge. If you don’t want to limit your usage, you need a power bank. Also see:  Best power banks 2018.

These come in two varieties. On the one hand you have high-capacity power banks such as the EC Technology 22400mAh High Capacity Power Bank, which can recharge an iPhone 5s 10 times. That’s great if you’re going away for a few days, but for daily use this big, bulky, heavy power bank is OTT. You certainly wouldn’t want to carry it in your pocket.

On the other hand are the smaller 2000- to 3000mAh capacity power banks that will recharge your phone only once, but are cheaper and compact and light enough to slip into a pocket or bag and you won’t notice their presence. Olixar’s PC810 Power Bank and Veho’s Pebble Smartstick+ are two such examples, but this Intocircuit PowerMini 3000 Power Bank is a better one.

The Intocircuit PowerMini takes the plus points of those two devices, and does away with the cons. While the Veho Pebble Smartstick+ is pricey at £39, this Intocircuit costs just £10.99 from Amazon. That also makes it cheaper than the now-£16 Olixar – and higher in capacity, too. While the 2000mAh Olixar won’t fully charge your smartphone, with its 3000mAh capacity (expect around 2000mAh with some energy lost through heat generated and voltage conversion) the Intocircuit just might.

It’s also easier to slip into a pocket than either of those two devices. It’s a lipstick-style charger, if a little longer than most at 128x80x28mm, but similarly light at 118g. It even looks a bit like a lipstick, what with its orange printed label on one end noting the model number, capacity, and input- and output ratings. It’s less bulky than the rectangular Olixar, and not as long as the Veho. And while the USB ports aren’t protected with a cap, as is the case with the Veho, that also means there’s no cap to lose.

Our sample has a matt gunmetal grey aluminium case with rounded corners, a chrome-effect power button and a blue three-LED system that shows how much power remains (each LED represents 1000mAh). The Intocircuit doesn’t support auto-on, so you just plug in your smartphone and tap the button to begin charging. This button also lets you check the device’s capacity when a device is not plugged in, and a rapid double-press activates a tiny but potentially useful LED torch.

Intocircuit supplies a short Micro-USB cable that is used to recharge the PowerMini 3000 Power Bank. You can either plug this into your PC’s USB port or your regular smartphone USB charger. At this price you shouldn’t expect passthrough charging, which allows you to simultaneously charge both your smartphone and the power bank, but with a 1A input you’ll be able to fill the PowerMini in a few hours, and much faster than you would the also-3000mAh Smartstick+ with its 0.5A input.

There’s a single USB output, rated at 1A, which is perfectly acceptable for charging a smartphone but for a tablet you might want something faster. That said, we had no problems charging our iPad mini 2 with the Intocircuit PowerMini.

Pleasingly a soft carry pouch is also supplied in the bag. The device is durable enough to carry around on its own, but it’s handy for keeping together your charging cable and power bank.