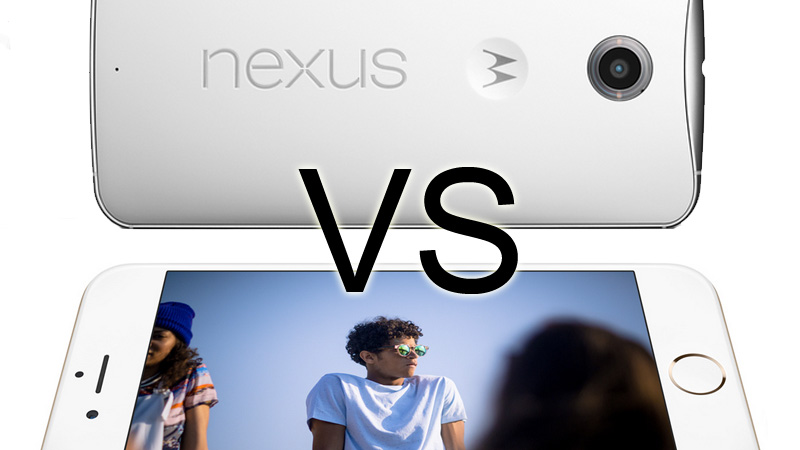 The iPhone 6 Plus and Nexus 6 are fairly evenly matched, but there are some pros and cons to both. If you’re already a huge fan of Android or iOS, then the decision is made a lot easier due to the software you’ll find on these two smartphones. The iPhone 6 Plus offers a bigger storage option (but it’s rather expensive), a more premium look and a Touch ID fingerprint scanner, but the Nexus 6 offers a bigger and better screen, front-facing speakers and probably a lower price tag though we’ll have to wait for official confirmation for that one.

Google unveiled a series of new Nexus products on 15 October, including the Nexus 9 tablet, Nexus Player, Android 5.0 Lollipop and a new Nexus 6 smartphone. So how does that new smartphone compare with Apple’s smartphone offerings? Here, we find out when we put the rivals head-to-head in our Nexus 6 vs iPhone 6 Plus comparison.

It’s important to note that this comparison is currently based on information provided to us by Google, as we’ve not yet been able to run all of our tests on the Nexus 6. We’ll be updating this article as soon as we get our hands on a review unit and put it through its paces, but for now this article should provide you with all of the basic facts and figures you need to help you start making your decision about which of these smartphones is best for you. The iPhone 6 Plus information is based on our full iPhone 6 Plus review.

The Nexus 6 looks a lot like the Motorola Moto X. That’s because Google worked with Motorola to design and build the Nexus 6 (as you’ll soon realise from the Motorola logo emblazoned on the back of the smartphone).

It has tapered rear edges, an aluminium frame and a centrally placed camera on the rear with the dual-LED flash surrounding it. The back itself is made with plastic, but the aluminium edge does help give it a more premium look. It’s available in navy and white colour options.

The iPhone 6 Plus is the larger of Apple’s two latest smartphones. Unlike the Nexus 6, it’s made completely from anodised aluminium, available in silver, gold or grey. Arguably, this makes the iPhone 6 Plus look more premium than the Nexus 6, but we’ve found that it comes down to personal preference.

Plus, there’s the matter of durability, and aluminium tends to be easier to scratch and disfigure than plastic (though most people tend to use a case to protect their smartphones anyway).

The Nexus 6 is a bit heavy, and also quite a bit thicker at its thickest point of 10mm, though the tapered edges will make it feel slimmer than it is and the weight difference is unlikely to be very noticeable.

Nexus 6 vs iPhone 6 Plus comparison: Screen

Thanks to their large screens, we’d consider both the Nexus 6 and the iPhone 6 Plus to be ‘phablets,’ falling somewhere between the smartphone and tablet markets. Their size won’t appeal to everyone, but if you want to use your smartphone to watch video content or if you simply prefer more screen estate then a phablet should suit you nicely.

The 6in screen on the Nexus 6 has a very impressive QuadHD resolution at 2560×1440 pixels, matching that of the Samsung Galaxy Note 4 and LG G3. It’s AMOLED, which, in particular, offers benefits when it comes to power saving.

Both of these screens are very good, though, and will make watching TV and movies or playing games a complete joy.

You’ll find a 64-bit Qualcomm Snapdragon 805 processor clocked at 2.7GHz inside the Nexus 6, joined by Adreno 420 graphics and 3GB RAM.

The iPhone 6 Plus, meanwhile, is powered by Apple’s own 64-bit A8 processor and M8 motion co-processor coupled with 1GB RAM.

We’ll have to wait until we’ve run our full benchmark tests on the Nexus 6, but we expect it to be a suitably powerful smartphone. We already know that the iPhone 6 Plus is very powerful, and that it performed brilliantly in our tests even during heavy-duty tasks, so it’ll be interesting to see how the Nexus 6’s processor and graphics performance compares.

When it comes to storage, the Nexus 6 is available in 32GB and 64GB options. 64GB will be enough for many, but there’s no MicroSD slot, which is a real shame.

The iPhone 6 Plus comes in 16GB, 64GB and 128GB models, and of course (this is Apple we’re talking about) there’s no MicroSD slot here either.

Connectivity features in the Nexus 6 and iPhone 6 Plus are similar, both offering 802.11ac WiFi, Bluetooth 4.1 and NFC, in addition to 4G LTE.

The iPhone 6 Plus misses out on the front-facing features boasted by the Nexus 6, though, which are a huge boon for those who want to watch video on their smartphone without using headphones.

What the iPhone 6 Plus can offer, however, is the Touch ID fingerprint sensor, which will probably appeal to some more than others. It helps improve security of both your smartphone itself and also your data stored on the smartphone, as it can be used to unlock the device, unlock particular apps and also pay for items on the iOS App Store and on some online shops.

Nexus 6 vs iPhone 6 Plus comparison: Cameras

The camera on the Nexus 6 should be quite impressive, at 13Mp, an aperture of f/2.0, optical image stabilisation and the ability to capture 4K video.

The iPhone 6 Plus, on the other hand, has an 8Mp camera. But don’t be fooled in to thinking that means the Nexus 6’s camera is better. Apple has made the pixels in its iPhone 6 Plus bigger which massively improves quality, and it also offers optical image stabilisation and a good (but not quite as good) aperture of f/2.2.

Nexus 6 vs iPhone 6 Plus comparison: Software

iOS 8 is also new, and also offers new features to users of the iPhone 6 Plus.

However, we’ve found that software is another thing that comes down to personal preference, combined your device history. If you’ve had lots of iOS devices in the past, purchasing another iOS device means you’ll keep all of your apps and iTunes content, and it’ll be quick and easy to transfer them onto your new iPhone.

The same goes for Android Lollipop: if you use Android already all of your Google Play Store apps will be easy to transfer onto your Nexus 6, in addition to the rest of your content and data, so you won’t need to purchase them again.

But if you’re thinking about making the jump to the opposing operating system and are interested in the idea of a phablet, these two devices are among the best you can get, so should help ease the transition. It’s worth investigating both operating systems further, which you can do in our iOS 8 vs Android Lollipop comparison.

Nexus 6 vs iPhone 6 Plus comparison: Price

We still don’t know how much the Nexus 6 will cost in the UK, but it’s expected to be significantly more than the £299 of the Nexus 5. Rumours suggest it’ll cost $649 in the US. We’ll update this article when we find out more.

The iPhone 6 Plus starts at £619 for the 16GB model, and reaches £789 if you want the 128GB model, so we think both of these smartphones will fall into the high-end smartphone category. This is a bit of a surprise from Google, as one of the appeals of the Nexus 5 was its excellent price tag and value for money.

Nexus 6 vs iPhone 6 Plus comparison: Which is best?

The iPhone 6 Plus and Nexus 6 are fairly evenly matched, but there are some pros and cons to both.

If you’re already a huge fan of Android or iOS, then the decision is made a lot easier due to the software you’ll find on these two smartphones.

The iPhone 6 Plus offers a bigger storage option (but it’s rather expensive), a more premium look and a Touch ID fingerprint scanner, but the Nexus 6 offers a bigger and better screen, front-facing speakers and probably a lower price tag though we’ll have to wait for official confirmation for that one.