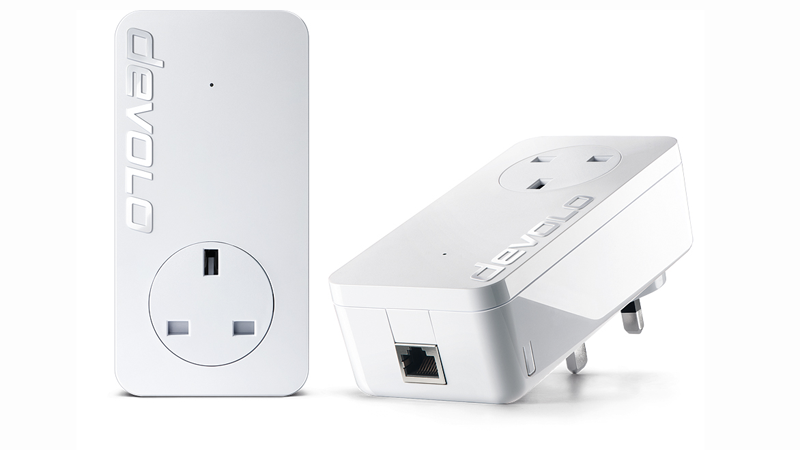 The Devolo dLan 1200+ is one of the fastest Powerline adapters we’ve tested to date. It might not reach the dizzying speeds that it claims, but that’s true of all Powerline adapters out there. Its integrated electrical pass-through power socket is a real bonus, and the model with Wi-Fi and two Gigabit Ethernet ports on the second unit, if a little pricy, pretty much has it all. It’s not the very latest model but it still performs excellently. (Not available in the US.)

We originally tested this fast Powerline set in 2014, but a couple of years later and it’s still working well and offering excellent performance. The technology hasn’t jumped forward a great deal in the intervening years so don’t worry that you are buying old tech.

Powerline adapters have the potential to revolutionise your home network and entertainment systems, and they are ridiculously easy to set up and not overly expensive. There’s little not to like.

Today’s homes require an ever-increasing number of network connections: from smart TVs, Sky+ and Virgin Tivo set-top box PVRs or Apple TV, PC or laptops, games consoles and even smart thermostats. All of these reach their full potential when connected to a decent home Internet connection.

As a home’s broadband connection often resides in a different room to these home-entertainment devices we rely on Wi-Fi, which means the signal they get is compromised by distance and the number of walls it has to struggle through.

Powerline reduces this drag by putting a new Internet connection (or Wi-Fi hot spot) right there in the second (or third room).

Simply plug one adapter into a power socket by your Internet router or modem (and link with an Ethernet cable), and the other in a power socket in the room where you require another Ethernet connection. The signal is carried over your home’s internal wiring.  Read more on What is Powerline and read our Best Powerline Adapters round up.

We’ve tested many Powerline adapters, and we’re lucky now to be in a period of technological advance for the products. Where once the top speed was 200Mbps most Powerlines work at claimed speeds of 500Mbps. And now we have our first 1200Mbps Powerline adapter, the Devolo dLan 1200+, specially built for Gigabit transmission speeds.

As you will read in the Powerline FAQ feature such speed claims aren’t accurate – at all. Not even close. These claimed speeds are the theoretical maximum speeds of the chips used within the adapters. In actual live tests the speeds are much slower, but a 500Mbps Powerline will be faster than a 200Mbps adapter, and the new 1200Mbps adapter tested here is faster still.

The most you can really hope for with such adapters is around 100Mbps, but that’s enough to massively speed up your home network if you’re used to slow Wi-Fi speeds. Why are they so much slower than claimed? Consider the average house, its electrical wiring, other points of signal-disturbing “noise”, distance between power sockets, and myriad fluctuations. Your home is not a perfect data-transmission test centre – and as such we test Powerline adapters in real-world conditions rather than our high-tech lab.

As the name suggests the 1200+ WiFi ac Starter Kit  includes Wi-Fi functionality that quickly and easily creates a new, fast Wi-Fi hotspot in the second room, away from your router. It also features two rather than one Gigabit Ethernet port on the second unit; see below.

The more basic, but same-speed, 1200+ Starter Kit lacks the Wi-Fi and has just the one Gigabit Ethernet port on the second unit; see below.

Many homes now require more than the one Ethernet port on the second Powerline adapter, with smart TVs, games consoles, Sky+, Tivo, and other home-entertainment boxes begging for faster networking via wired Ethernet. If you’re one of those people who need more than one port, then the top-end 1200+ might suit you better than the basic kit.

Of course, you can just add a Gigabit Ethernet Switch (from around £20) to the adapter and hang more Ethernet cables off it. If you have need of more than two then you might need the extra switch even on the top model. Devolo does make a couple of adapters with three Ethernet ports (the £99.99 Devolo dLAN 650 triple+, and £129.99 Devolo dLAN 500AV Wireless+) and we were a little disappointed that its new flagship model has just the two. But that’s our only real complaint.

Devolo Powerline adapters have been favourites of ours for a while. They are well made and often offer extra features you won’t find in other makes.

(Here follows a technical explanation as to why the new Powerlines are faster than previous generations. Feel free to skip this part and jump to the speed tests and other information. After all, the point of Powerline is that it’s so simple.)

With its dLan 650 adapters the company used its Range+ technology that uses not just the Live and Neutral wires in your home’s electrical wiring – as most Powerline adapters do – but the Earth wire too.

The new dLan 1200+ Powerline takes this a step further. The new generation of range+ operates using what Devolo calls diversity. Not only can both possible paths (live-neutral and earth-neutral) of data transmission be used, but only the path currently providing the best results is used. In milliseconds the Powerline chip determines which line provides the best results and routes the data through this path – significantly improving stability and a longer range.

This is made possible by the new QCA 7500 chipset, which offers enhanced processing power compared to the previous model. Again, increased stability and range are the advantages.

Devolo engineers also claim to have lowered the power consumption in this latest Powerline range. When in use, the dLan 1200+ uses a maximum of 4.2 watts, and if the connected terminal device is switched off, the adapter automatically goes into standby mode, using just 0.7 watts.
All these speed enhancements would be useless if the adapters used older, slower 10/100 Ethernet connections and cables, which would (and do for many 500Mbps adapters) limit the speed to 100Mbps.

The dLAN 1200+ is equipped with a gigabit Ethernet connection and a gigabit Ethernet cable. The Starter Kit, including base and second adapter unit plus cables, costs £119.99; and additional adpaters can be bought for £64.99. You’ll find the best online prices at the foot of this review.

We test every Powerline adapter under common conditions to get a fair comparison on speeds. This does mean that our speed tests might not duplicate what you get but you can be confident that what we find is faster should be faster in your home too.

We compared the Devolo 1200+ and 1200+ WiFi to two other fast Powerline adapters: Devolo’s own dLan 650 and TrendNet’s Powerline 500AV2, our fastest-rated Powerline to date.

The 1200+ lived up to its technical chops, beating both formidable rivals with ease.

In our fastest-possible test, where the two adapters are placed next to each other – hardly a real-world situation but a theoretical test on straight-line speed – the 1200+ reached 357Mbps. While this is an awful lot lower than the bold 1,200Mbps claim it is much faster – nearly twice so – than its closest rival’s 186Mbps result. The TrendNet scored a respectable but dwarfed 137Mbps in this test.

In our real-world tests the second adapter is placed in a room two floors down from the base unit and modem/router – in a Victorian terraced house. We think this will mimic an average UK home to give you a fair comparison.

The 1200+ again romped home, scoring an average speed of 126Mbps. Our previous fastest in this set up had been 88Mbps.

We later tested the Solwise 1200AV2 adapters, which are very similar but smaller and cheaper, although not as good looking and with the ports on the bottom of the adapter rather than the top. Its speed results were very marginally faster than the Devolo but there’s really nothing in it.

The top-end dLAN 1200+ WiFi ac model features the latest wireless standard, 802.11ac, which can deliver significantly improved speeds over previous Wi-Fi standards thanks to greater bandwidth and higher amplitude. It creates a new Wi-Fi hotspot in the  room where you put the second adapter so should remove the usual Wi-Fi degradation caused by  distance, walls, etc. The great thing is that you don’t need to have an “ac” router – or indeed a wireless router at all – as the Powerline adapter provides the ac access point. So if your router is simply wired and not wireless the 1200+ WiFi will bestow your house with fast WiFi.

Again the 1200 WiFi didn’t disappoint, reaching 117Mbps in our tests. The previous fastest Wi-Fi we’d got from a Powerline adpater was 68Mbps.

For security, especially in shared living environments, users can activate the 128-bit AES encryption at the push of a button to avoid any unauthorised access to the network.

You can use the Devolo Cockpit software on Mac, Windows or Linux (and there’s the obligatory app) to configure and manage encryption – but the system will work straight out of the box just by plugging it into a socket and connecting to your router/modem.

We prefer the 1200+ WiFi ac model as it includes a built-in Wi-Fi hotspot and two rather than one Gigabit Ethernet port on the second adapter.

Powerlines with added Wi-Fi are great because they don’t just extend a Wi-Fi signal, they create an entirely new hotspot in the second or third room, so jumping over the usual Wi-Fi barriers such as brick walls and starting afresh at a short distance.

If you think your home Wi-Fi is fast enough and you don’t need more than one Ethernet port then you’ll save £40. If you want more than two ports then maybe just get the basic one-port unit and invest £20 in a 4-port Gigabit Ethernet Switch.

Devolo’s other Powerline adapters offer less expensive options  and in a couple of cases three ports – but don’t match the 1200+ on breakneck speeds. That said, for most home uses the speeds you’ll get from a 500Mbps Powerline are probably enough, even for HD TV streaming.

But if you want the very latest and very faster Powerline then the Devolo 1200+ is an easy choice.