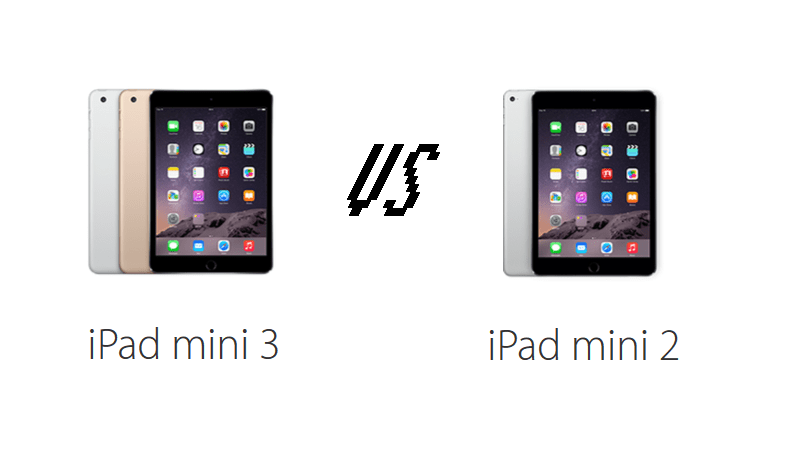 Realistically the extra £80 for Touch ID and a gold colour on the iPad mini 3 isn’t worth it. Unless you’re happy to spend £479 on the 128 GB capacity, we recommend the now cheaper and almost identical iPad mini 2.

Normally, we would split a comparison into many different sections but here we’re going to simple explain what’s new and what is still the same. You’ll see why. Read: iPad mini 3 first-look review.

At its special event in Berlin, the iPad mini 3 got about 10 seconds worth of stage time following a comprehensive introduction of the iPad Air 2. Now we’ve checked the specs of the new pint-sized tablet, we can see why.

Compared to its predecessor, the iPad mini 3 only gets you the Touch ID finger print scanner and is available in gold like the iPhone 6. The storage line-up has been changed as the 32GB model has been dropped so you can now choose from 16-, 64- and 128 GB.

This is bit a bit shocking considering the iPad Air 2 has a thinner and lighter design, new A8X processor, a better 8Mp iSight camera, an anti-reflective coating on the screen and a barometer. See also: Apple iPad Air 2 first-look review.

Typically, the new iPad models come with the same upgrades but that’s not the case this year. Apple has kept the price the same, so the iPad mini 3 starts at £319 and goes up to £479 for that 128 GB model. You can add £100 for 4G connectivity.

While keeping the price the same for a new model is good, the very small amount of changes mean that the iPad mini 2 at a lower price of £239 looks like a far more attractive option. We’re not comparing it full here but it’s worth noting that Apple has kept the original iPad mini on sale for £199. See below for a full price comparison.

If you’re thinking about upgrading from the iPad mini 2 then you’re going to have to really want the Touch ID fingerprint scanner and the gold model (the additional storage will cost you more anyway).

If you’re considering buying your fist iPad mini then we recommend saving some money and getting the iPad mini 2 since it’s almost identical and still a decent tablet.