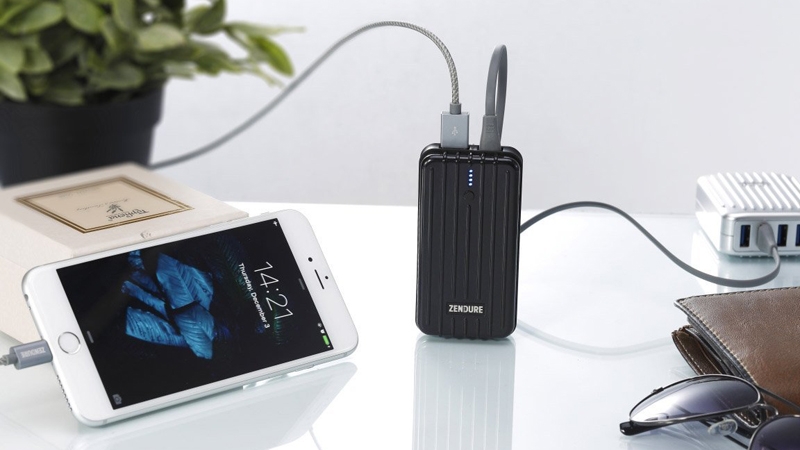 It might seem strange to find a power bank at number one in our chart that doesn’t have an LCD screen, doesn’t support USB-C or Lightning, doesn’t have multiple outputs and doesn’t feature Quick Charge 3.0 support. But we stand by our claim that the Zendure A2 is absolutely the best personal power bank on the market. It’s compact. It’s good-looking. It’s fast. It’s super-tough. It’s plug-and-go. It has enough capacity for several charges and it’s great value. A well worthy winner of our best power bank crown.

Zendure‘s A2 6700mAh power bank hits the sweet spot between price, capacity and portabilty – and now available in black it’s even better looking. It’s absolutely the best power bank you can buy in the UK today, and here’s why. Also see:  Best power banks 2018.

This is the fourth time we’ve seen the Zendure A2, although it’s still in its second generation. The first release was a 6,000mAh power bank, which was upgraded to 6,400mAh and the price brought down for the second release. Zendure late last year upgraded the capacity to 6,700mAh, and more recently has introduced this black edition. It’s not just better looking – it’s cheaper, too. Also see: Best tech to take on holiday 2016.

Available in the UK via Amazon UK, you can pick up the Zendure A2 6,700mAh (second-generation) power bank for £28.31. Considering what you get in return, that’s awesome value.

We’ve reviewed plenty of power banks over the past couple of years, and without exception every one has had a catch. If they’re high in capacity then they’re big and heavy; if they’re portable then they have insufficient capacity to fully charge your phone or tablet – or they take hours to charge over a meagre 0.5A output; and if they support fancy features such as passthrough charging then they’re expensive.

For a long time, the closest thing we had to a happy medium was the Lumsing 10400mAh Power Bank. At under £35 it’s great value, it’s stylish, it offers fast charging and it’s reasonably portable, although you still wouldn’t carry this brick in your pocket, and it takes a while to recharge. The Zendure A2 changes everything.

Compact, lighter than you might expect and reassuringly durable, this 6700mAh power bank will deliver around 5360mAh to your mobile devices (some energy will naturally be lost through heat generated and voltage conversion, although Zendure claims its A2 has a very good 80 percent efficiency rate). That’s plenty to fully charge a smartphone at least twice, and probably three times.

Although it has just the one USB output it’s rated at 2.1A, which translates to 10.5W and fast charging for compatible devices, even if there is no support for Qualcomm’s Quick Charge. The A2’s Micro-USB input is also nicely specified at 1.5A (7.5W), meaning you could recharge this power bank in just four hours.

Higher-capacity power banks in Zendure’s range feature two USB outputs and, as we mentioned earlier, smarter power management of those outputs. (All are available via Amazon UK.) But we think the A2 hits the sweet spot between price, capacity and portability. Zendure supplies a soft carry pouch in the box, but you could realistically slip this power bank into a pocket.

The Zendure A2 is well equipped for a life on the road, too. Built from crushproof PC/ABS composite material with dual-injection molding and a shock-absorbing central belt, this black or silver block is not only tough but it looks cool. Maybe not as cool-looking as a McLaren Spider, but definitely tougher (check out the YouTube video below).

In common with the vastly more expensive LimeFuel Blast L180X Pro this Zendure A2 supports passthrough charging. It’s an incredibly useful feature, allowing you to simultaneously charge both smartphone and power bank via a single power point, ensuring that both are full up and ready to go whenever you are. Also see:  Best desktop chargers 2015.

If your phone tends to give up mid-afternoon, just whip out the Zendure A2 and you can double or even triple its life. Even if your battery gives up the ghost less frequently, the A2 will hold 95 percent of its charge for up to six months.

Also like the LimeFuel the Zendure supports auto-on. This means you won’t have to fiddle around with buttons to get your device charging. Just plug it in and charging begins. Simple. Also see:  How to charge your phone or tablet faster.

There is a single button on the Zendure A2, although this is used only to check the remaining battery capacity. As with all other power banks the A2 uses a four-LED system, but with its 6700mAh capacity each represents a much smaller 1675mAh, making it easier to work out just how much remains.

Zendure supplies a flat Micro-USB cable in the box with a reversible USB connector; if your device uses a proprietary connector you’ll need to provide your own cable.

The power to pound ratio isn’t as high as it is with power banks such as the aforementioned Lumsing or the EC Technology 22400mAh High Capacity Power Bank, but we think features such as passthrough charging, auto-on and its durable, portable design make this Zendure the better deal.