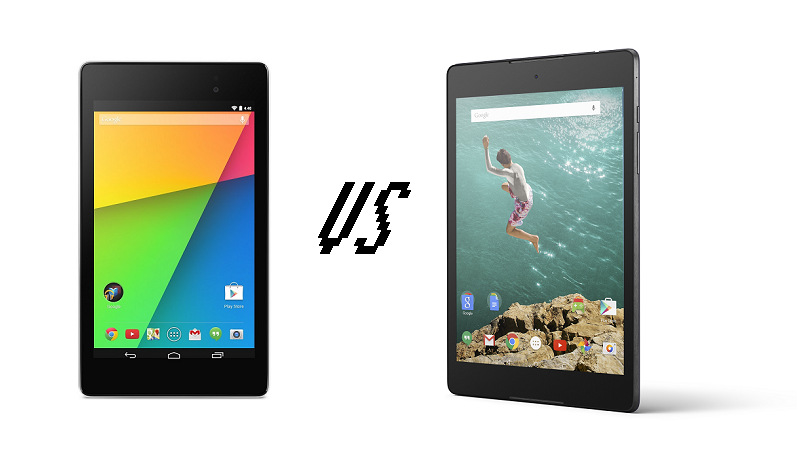 The Nexus 9 is undoubtedly better than the Nexus 7 with a more powerful 64-bit processor, better cameras and front facing stereo speakers. The screen is bigger too but there’s a drop in pixel density and an increase in price. Stand by for an update once we get our hands on the Nexus 9.

As expected, Google has announced the Nexus 9 with  Android 5.0 Lollipop and you’re probably wanting to know what different compared with the Nexus 7. Read our Nexus 7 vs Nexus 9 comparison to find out. Also see: Best tablets and Best Android tablets.

Before we get into the comparison, it’s worth pointing out that we’re comparing the new Nexus 9 with the Nexus 7 (2013) and not the original from 2012. Google also announced the  Nexus 6 and the Nexus Player.

The Nexus 9 is available to pre-order now for release on 3 November. Meanwhile, the Nexus 7 has been removed from the Google Play store but you should be able to find it at other retailers while stocks last.

Although Asus made both versions of the Nexus 7 and HTC has built the Nexus 9, the two look quite similar in design.

The Nexus 9 is easily recognisable as a Nexus device and has a brushed metal frame running around the edge. The rear cover remains soft grip plastic and while the Nexus 7 was available in black and white, the Nexus 9 comes in a new beige/sand colour.

The jump is screen size is a major difference here and Google has gone from 7in to 8.9in so effectively a gain of 2in as the product names suggest. The aspect ratio moves from 16:9 to 4:3 matching the iPad range.

Another big change is the nVidia Tegra K1 processor found in the Nexus 9 which is a 2.3 GHz 64-bit dual-core Denver chip – a nice jump from the Nexus 7’s Qualcomm Snapdragon S4 Pro which is 1.5GHz quad-core.

Although the screen and processor are big changes, much of the Nexus 9’s specs remain the same including 2GB of RAM, 16- or 32GB of internal storage, no microSD card slot, NFC, optional 4G LTE and GPS.

Google has also fitted then Nexus 9 with a magnetometer for detecting magnetic cases.

Although we’re not too bothered about cameras on tablets this is an area with upgrades on the Nexus 9 with an 8Mp rear camera which is accompanied by an LED flash. That’s better than the Nexus 7’s 5Mp main camera with no flash. Video recording remains at up to 1080p.

Google’s figures tout up to nine hours of video playback on the Nexus 7 and the Nexus 9 will do an extra half an hour. However, it will supposedly only cope with 9.5 hours of web browsing while the Nexus 7 can manage 10.

There’s really no difference in software as although the nexus 9 will ship with Android 5.0 Lollipop, the Nexus 7 will get updated to the latest version. The only real difference is that the Nexus 9 will make full use of it with the 64-bit processor.