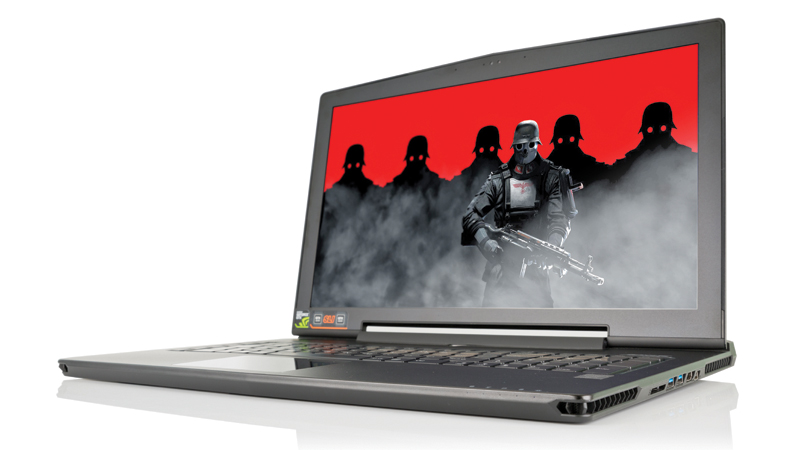 The Aorus X7 v2 is a sturdily made all-metal gaming laptop that keeps its waistline to around 1in, even if it still tips the scales beyond 3kg. With its dual-GPU setup it proved itself the fastest gaming laptop in the group, albeit with an unsurprising price premium.

How’s this for a gamer’s dream. If there’s one thing better than a decent graphics processor in a laptop, it’s got to be two very decent graphics processors in the same machine. That’s what the Aorus X7 v2 offers, a pair of nVidia GeForce GTX 860M GPUs, arranged to work in unison in nVidia’s scalable link interface (SLI) configuration. Also see: Best gaming laptops.

Aorus, a sub-brand of Gigabyte, isn’t the first laptop maker to try this trick on a gaming notebook, of course. What is remarkable is how it’s done so in a relatively thin chassis. The Aorus X7 v2 is just under 25mm thick, which in laptop gaming circles makes it practically a MacBook Air. It’s no lightweight though, thanks to an all-aluminium metal body and a big 17in display. Ignore Aorus’s claim of 3kg weight – this 425mm-wide beast weighs 3.24kg, plus another 965g for the 200W mains charger, making an effective all-up weight of 4.2kg. Also see: Best laptops.

Finding a Windows laptop with entirely metal construction is almost unheard of, and the choice of aluminium is good for sinking away the unavoidable outpouring of heat that two GPUs and a quad-core CPU create. Two cooling fans inside draw in and expel air over a series of internal heatpipes and sinks, although we did find that the fans would ramp up to annoyingly loud levels for no good reason, seemingly randomly, with the Aorus V7 X2 laptop just left idling on the desk. See all laptops buying advice.

The Aorus X7 v2 comes with faster 1867MHz memory in place of 1600MHz, a surfeit of 16GB of it in our sample, and has found space to accommodate not three but four internal storage drives. For bulk storage, it can accept a single 2.5in SATA hard drive – our sample included a 1TB disk – while three 128GB mSATA SSDs from Lite-On were configured in RAID 0 to give a speedy 367GB boot drive. Also see: Laptop Advisor.

On processor duties is now an Intel Core i7-4860HQ, a 2.4GHz quad-core chip with plenty of power for a machine that will rely more on its graphics horsepower to win friends. Combined with the fast storage setup, this combination allowed the Aorus V7 X2 power laptop to romp in with 6304 points overall in the PCMark 7 system benchmark test – the highest scoring laptop we’ve tested.

The laptop’s screen is superficially impressive, a 17.3in TN panel with matt finish for easy glare-free viewing. Look closer, though, and you may see a fine vertical grain structure than we found a little unsettling. Viewing angles side-to-side are very good, not far from a high-quality IPS panel; but viewed from below you get the unmistakable negatised colour reversal of a TN screen.

We found the Aorus V7 X2’s trackpad unusual, a shiny buttonless surface somewhat similar to Apple’s peerless glass trackpads, although this version’s plastic finish made finger movements stickier. We’ve no complaints about the keyboard, though, a typical Scrabble-tile construction with easy action and backlit keys.

We gave the Aorus V7 X2 a workout with a couple of games. In our Stalker: Call of Pripyat test, it scored 189fps on the Medium setting and 157fps on Ultra. In Tomb Raider, the Aorus excelled, averaging a healthy 88fps at Normal detail, dropping to 57fps at High, but still an impressive 43fps with all the stops out at Ultimate quality.

Battery life from the non-removable 75Wh lithium-polymer battery was rather brief at 1 hour, 48 minutes.