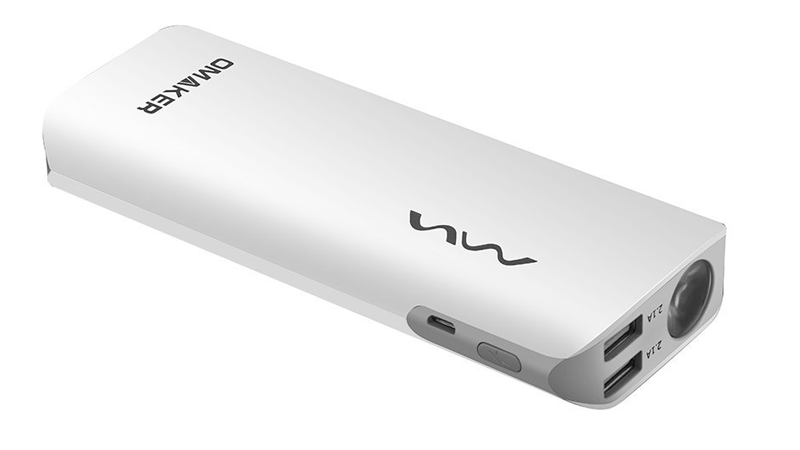 Very evenly matched to the slightly cheaper Lumsing 10400mAh Power Bank, this Omaker S-X5 portable USB charger swaps a little style for improved performance, offering a torch and two fast-charging 2.1A outputs to the Lumsing’s one. If you’re looking to quickly and simultaneously charge two devices then this may be the better buy, yet it lacks that premium feel of the Lumsing. 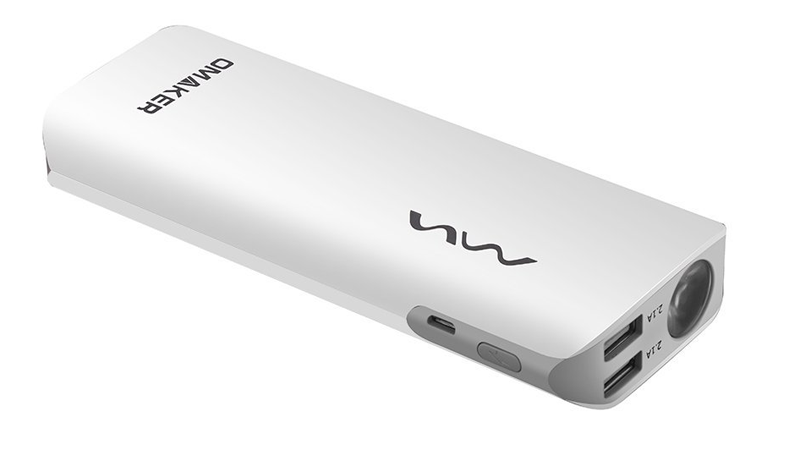 Omaker is a new name to us, but parent company DoReMi Mall has been trading in car chargers, Lightning cables and power banks on Amazon for six years. Its S-X5 10000mAh Power Bank is a twin-output USB charger, with both ports supporting fast charging at 2.1A. Also see:  Best power banks 2018.

Its closest rival is perhaps the £17 Lumsing 10400mAh Power Bank, which by comparison offers only one 2.1A output, with its second rated at 1A. That power bank is a few pounds cheaper and arguably more stylish, but the Omaker’s second fast-charging port and built-in 1W torch may make it the better deal for you. It costs £19.99 from Amazon.

The two power banks are very similar in size, with this Omaker S-X5 ever so slightly larger (at 158x23x63mm versus the Lumsing’s 138x59x20mm), but heavier at 290g versus 159g. Whereas the Lumsing has a sleek gloss white or black casing with silver painted plastic edging, this Omaker is a matt white candy bar-style device that’s easier to grip and feels sturdier, but lacks that premium feel.

Functionality is more important than style, of course, and here the Omaker S-X5 wins out. We had no problems simultaneously charging our Samsung Galaxy S4 and iPad mini 2.

We also like the fact the Omaker Power Bank automatically turns on when you plug in a device to charge. And, more importantly, it turns itself off when you’re done, so it won’t waste power.

As with most other power banks, four LEDs are used to denote how much capacity remains. But with each representing 25 percent, or 2500mAh, you’ll never be entirely sure how much power is left in the S-X5.

With a 10000mAh capacity you can reasonably expect between around 6500- and 7000mAh to be available to your phone or tablet (some capacity is lost through heat generated, voltage conversion and other scientific things we won’t pretend to understand). As an example, if you’re charging the 1910mAh battery of an iPhone 6 you can expect to completely fill it around three and a half times. If your phone has a smaller-capacity battery you can expect more full charges; if you’re using a tablet expect fewer.

According to DoReMi Mall the Omaker S-X5 Power Bank can take 10- to 12 hours to recharge via its 1A Micro-USB input. If that’s too long for you to hang around then consider a device with a higher-rated input, such as the LimeFuel Blast L180X Pro (more expensive, but supports passthrough charging) or EC Technology 22400mAh High Capacity Power Bank (offers more than double the capacity at less than twice the price).

One small gripe is with the supplied Micro-USB cable (if you’re using Apple Lightning or another proprietary connector you’ll need to supply your own cable). While it looks good in the box, a flat white USB cable that should repel tangles and the subsequent damage caused by them, when we pulled it out of the power bank the plastic casing came away from the USB connector. This is more than likely simply a case of a faulty cable, and imn any case Micro-USB cables are rarely in short supply.