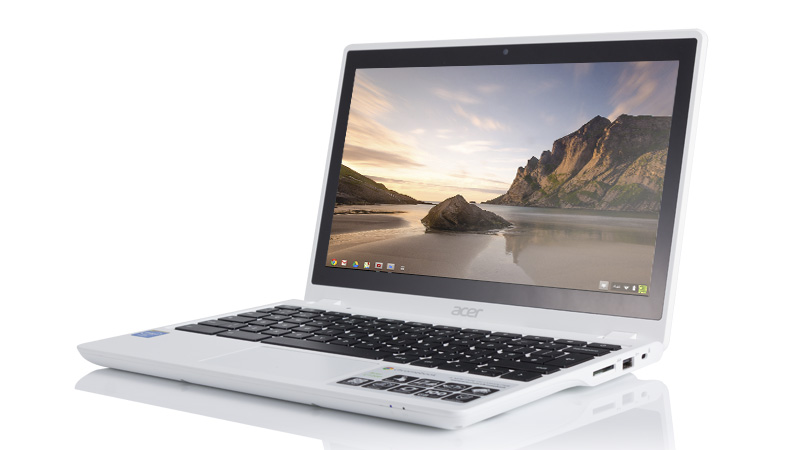 As a wallet friendly machine for browsing the internet and getting some work done the Acer C720p Chromebook is a great choice. The touchscreen really adds a nice upgrade to an already attractive package, and if you can live within the internet world of Chrome OS, then at this price you can’t go wrong.

An Acer C720 Chromebook with a touchscreen, the Acer C720p is a great budget laptop for getting work done on the go – if you can live in a world of Chrome OS. See also:  Which laptop to buy: laptop buying advice, and the best laptops.

The Acer C720p Chromebook is, in almost every aspect, the same machine as the Acer C720 Chromebook. It boasts an identical Haswell-based, 1.4GHz Intel Celeron CPU, 2GB of RAM, 16GB SSD, diminutive size and general speedy performance. Where it differs is first hinted at when you pick them both up, and notice a slightly heavier balance on the C720p. This phantom weight is down to the touchscreen panel that turns a useful, cheap laptop into a cool, web-friendly, not quite as cheap – but still very reasonable – laptop. Also see:  Best Chromebooks

The idea of a touchscreen Chromebook might seem a little odd. After all, Chrome OS is such a lightweight operating system, how would it benefit from adapting it to touch? Well, as it turns out, rather well. The secret lies in the fact that almost nothing changes, except your ability to navigate the web in a fashion far closer to that of a phone or tablet.

When Microsoft released Windows 8, it did so with much ceremony and a complete redesign of the world’s most used interface. This has by and large been considered as something of a failure, due to the acrimonious user feedback that caused the company to hastily ready Windows 10, and reinstate many of the previous features. Chrome OS has no such learning curve to overcome, as the UI is left intact.

You can use the Acer C720p as you would any other Chromebook, and you’ll never notice the difference. But if you’re on a web page and want to select a link, highlight a text box in a form or hit a dialogue button, tapping the screen will make it so. Of course, this is hardly revolutionary, but the unintrusive inclusion of a touch option does sit well with the web-centric way that a Chromebook works.

Thankfully the panel itself is responsive and handles multitouch gestures, such as pinch to zoom, in a generally pleasing fashion. It’s not as smooth as, say, an iPad; the Acer C720p surface has a little more friction, making the tactile response feel like harder work. These are minor gripes, though, with the regular scrolling or tapping to select functions executing happily.

A few handy controls have been added to the touch interface, including swiping in from the bezel on the left to take you back to the previously loaded web page, while swiping in from the right does the opposite. Double-tapping text won’t make it zoom to fit the page as it would on a smartphone or tablet, but instead brings up the text-selection arrows. Overall, though, it’s a satisfying addition to the Acer C720p Chromebook’s already useful chassis.

As with the C720, the C720p Chromebook is lightweight and compact. You do gain a little bulk with the touchscreen, but the whole unit still comes in under 3lbs, which makes it backpack-friendly. Although they are presumably the same, we found the keyboard on the C720p to have a little more spring in it than the C720 we reviewed. It’s still a little shallow, but the typing experience is a pleasant one for the most part.

Viewing angles on the Acer C720p Chromebook’s 11.6in active matrix TFT, 1366×768 resolution display are perhaps a little wider than its non-touch sibling. Saying that, this is still a screen that only one person can comfortably watch at a time, as details quickly disappear when you’re off-centre. The rear-mounted speakers provide a good amount of clear volume, but the bass response is the usual thin kind that we encounter on many inexpensive laptops.

The C720p Chromebook carries an impressive amount of ports on its small body, with HDMI, SD card, and twin USB (1x 2.0 & 1x 3.0) options located on the flanks. The only disappointment is that Acer has opted for a proprietary charger rather than the very handy USB charging that some of its rivals now use. A battery life of around six hours makes it not quite an all day machine, but you’ll still get plenty of mileage.

Read next:  Should I buy a Windows laptop or a Chromebook?