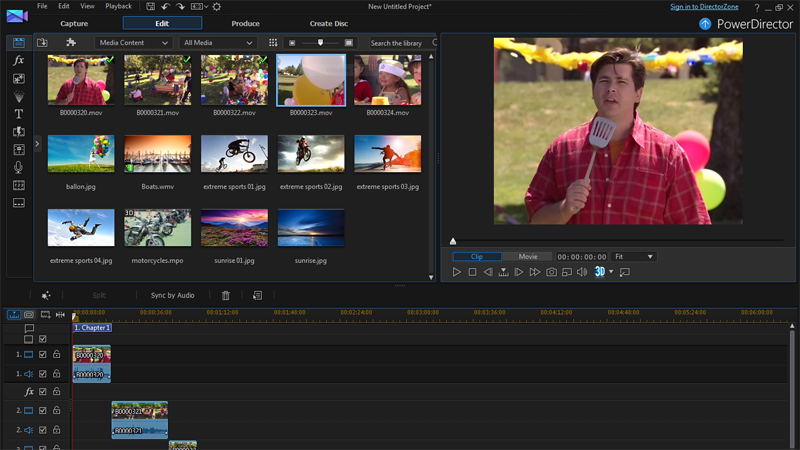 There’s very little to choose between these two programs when it comes to the variety and power of their editing tools. And, at around £80 each they both offer excellent value for money. Premiere Elements will appeal more to less experienced users as its Guided Edits do a great job of introducing important editing tools and techniques. However, PowerDirector lives up to its name, with some impressive features, such as its new Audio Sync option and sub-titling tools, that may well win over more experienced users.

Plenty of free video apps allow you to quickly shoot and edit short video clips for uploading to your favourite social media sites. However, for longer projects it’s worth investing in a proper video editor such as Cyberlink’s PowerDirector or Premiere Elements from Adobe. As you might expect, these two rivals share many features in common, but they present many of these features in different ways, so here’s our analysis of the strengths and weaknesses of both programs. Also see: best free video editors.

Both Premiere Elements and PowerDirector have now reached the grand old age of version 13, but it’s PowerDirector that seems to have more new ideas at the moment.

One really smart new feature is the MultiCam Audio Sync option. If you have two or more people with cameras shooting the same event from different angles then the video clips they record will obviously contain different images. However, they will all still share the same audio track, so the new Audio Sync tool can analyse the audio within multiple clips and use it to align your clips at the correct points in the timeline. This makes it much quicker and easier to cut from one camera to another and to create collages with footage from multiple cameras. See all video tutorials.

In addition to its existing selection of transition effects, PowerDirector now includes a Transition Designer that allows you to import an image and use it as a kind of mask through which one video clip can fade into another. The program’s Video Stabilizer has been improved to produce clearer, sharper images from shaky video, and Cyberlink has also added support for the highly efficient new H.265 video format, as well as the XAVC-S format for 4K video.

Premiere Elements, in contrast, has a more modest set of new features this time around. We like the new Guided Edits that show you how to place moving video within your titles, and to use masks to highlight specific areas within a video clip, but these Guided Edits are essentially simpler ways of presenting existing tools. The same applies to the new Video Story feature, which presents you with a storyboard divided into chapters so that you can quickly compile a batch of clips into a complete movie. To be fair, Premiere Elements was already a really powerful video-editor, but in this round of updates it’s PhotoDirector that shows more ambition.

Both Premiere Elements and PowerDirector provide two different editing modes that are designed to cater for beginners and more experienced users. When you launch PowerDirector you are asked if you want to use the Easy Editor or the Full Feature Editor. The Easy Editor helps beginners by prompting you to import a batch of video clips and to select a template, and then automatically compiles them into a complete movie project for you, complete with transitions and soundtrack.

More experienced users can opt for the Full Feature Editor, which provides access to the program’s multi-track timeline and its full range of editing tools. Our only complaint here is that there’s a huge leap between these two editing modes, and less experienced users may struggle when they try to move from the Easy Editor into the more advanced editing mode. The program’s Help files don’t actually help much either, as they tend to simply list features rather than clearly explaining how they work.

Premiere Elements does a far better job of helping new users. If you want Premiere Elements to do all the work you can select the Video Story option that we mentioned earlier and just let it compile your movie for you. If you want a little more control then the Quick tab at the top of the editing window displays a simplified version of the timeline where you can arrange clips yourself, while the Expert tab opens up the full multi-track timeline for more experienced users.

But Premiere Elements doesn’t stop there. Click on the Guided tab and you’ll see a list of Guided Edits that provide step-by-step help with many common editing tools and techniques. There’s a quick-start guide that introduces the basics of editing, along with guides for using transitions, titles and special effects. These guides are really well designed too – some of them even put big yellow arrows on screen to point at the buttons you need to press.

When it comes to transitions, PowerDirector and Premiere Elements both provide a good set of basic cuts, fades and wipes. And, in our opinion, anything else – such as 3D rotations, exploding particle effects and so on – just tends to look amateur and gimmicky, so piling on dozens extra transitions for the sake of it isn’t particularly important. And while PowerDirector’s Transition Designer sounds like a good idea, it’s not particularly easy to use, and is hardly essential – unless you want to create a custom transition that uses a corporate logo.

Video effects are more important, as you’ll often need colour adjustment tools to enhance the appearance of your video clips, as well as more eye-catching special effects that help to create drama and atmosphere. Both programs offer more than 100 different video effects of various types, but unless you’re looking for one specific effect – such as PowerDirector’s rather nice split-screen Continuous Shooting effect – then neither has a real advantage here.

There are, however, differences in the way that the two programs handle effects. Both programs allow you to apply effects by dragging the effect from a menu and then dropping it directly onto a clip in the timeline. However, PowerDirector also includes a separate FX track on its timeline, which makes it easy to quickly adjust the duration of an effect so that you can apply it to just one part of a clip.

Premiere Elements allows you to pile multiple effects onto your video clips, and then displays controls for all those effects on screen beside the main playback window. That gives you plenty of control so that you can fine-tune your effects and achieve just the right look.

The ultimate control here lies in the ability to use ‘keyframes’ to alter the properties of video clips and effects over time. The good news is that both programs provide keyframe controls. The bad news is that they’re both equally complicated, and will require a fair bit of time and effort to master, regardeless of which program you choose.

If the audio track is poor quality then you can delete it altogether, and both programs provide special tracks in the timeline where you can record your own voice-overs or insert a separate music soundtrack. The audio tracks display a waveform that you can click on to quickly adjust the volume level, but both programs also include mixer controls so that you can balance the sound levels across multiple audio tracks.

There are a few differences between the audio tools in these programs, though.

Premiere Elements includes a useful selection of sound effects that you can add to your clips, and also a number of ready-made music clips that you can use for your soundtracks. And, in addition to its video filters and effects, Premiere Elements also includes a number of audio effects, such as reverb and pitch-shifting, which you can modify in the same way that you modify the program’s various video effects.

Good-looking titles can add a professional touch to your video projects, and both programs provide a good set of tools for adding text for titles and credits. Premiere gives you lots of help by providing a range of templates for projects such as birthday videos or sports events. Many of these templates include predefined animation effects, such as scrolling credits for the end of a movie, and all you have to do is type your text into the template. Alternatively, you can skip the templates and create your titles by hand, selecting a font and a text style, and then choosing one of the many animation effects that are available.

PowerDirector doesn’t give you quite so much help in the form of templates and predefined animations for your titles. However, it does include a Title Designer module that provides very fine control over text properties such as character spacing, shading and reflection effects. The Title Designer also provides keyframe animation controls so that you can move and resize text, or make it fade in and out. These tools provide very precise control when creating titles, but they’re not as quick and easy to use as those of Premiere Elements, so you’ll need to put in a bit more work to get results.

But, in addition to the Title Designer, PowerDirector also includes an option specifically designed for creating sub-titles. There’s a special track for sub-titles in the main timeline, so you can type in the text and then quickly move the sub-title to the required point on the timeline, or enter the time code if you know exactly when you want the sub-titles to appear. You can create static text titles in Premiere Elements and use them as sub-titles, but the sub-titling tool in PowerDirector is quicker and easier if you need to use lots of sub-titles or captions in your video projects.

There’s very little to choose between these two programs when it comes to the variety and power of their editing tools. And, at around £80 each they both offer excellent value for money. Premiere Elements will appeal more to less experienced users as its Guided Edits do a great job of introducing important editing tools and techniques. However, PowerDirector lives up to its name, with some impressive features, such as its new Audio Sync option and sub-titling tools, that may well win over more experienced users.