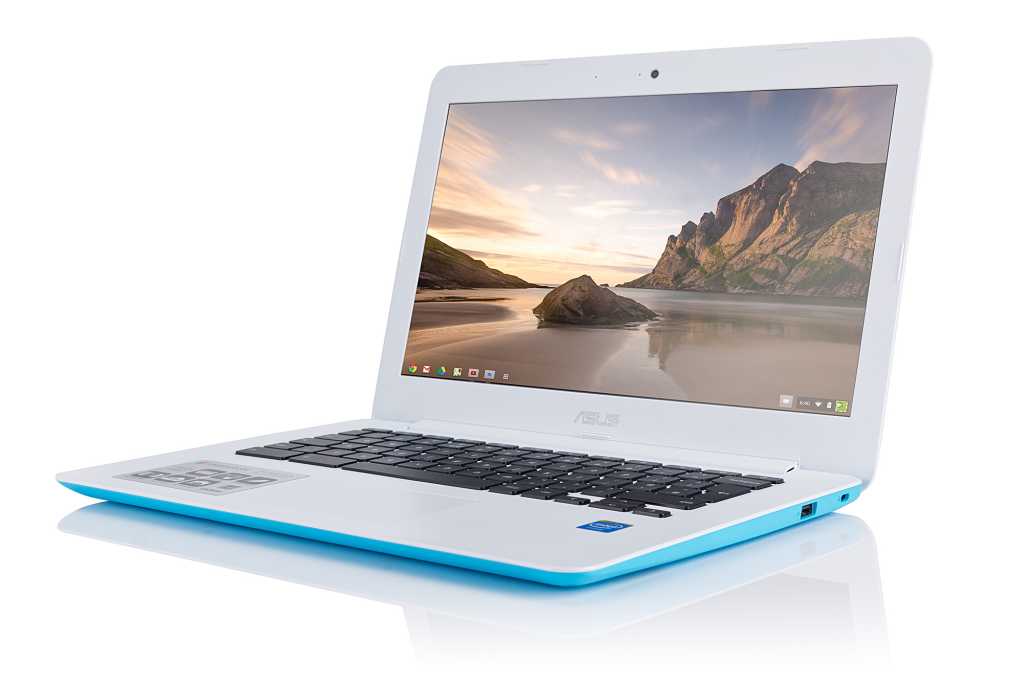 The C300SA might not be as svelte or quick as many of its Chrome OS brethren, but the lightweight chassis makes it highly portable for those who prefer things a little larger on-screen. The colours won’t be everyone’s cup of tea, but for us it’s a selling point that captures the essence of a Chromebook.

If the smaller screen sizes of most Chromebooks lack the kind of real estate you prefer, then the Asus C300SA might be a more attractive option. Although its little brother (the C200) has a ‘standard’ 11.6in display, the C300 expands the vista to 13in, making this model one of the largest Chromebooks available. See also: Which laptop to buy: laptop buying advice, and the best laptops.

The extra size does little to increase the heft though, as the device still feels light and portable, weighing in at a very reasonable 1.4kg. As you might imagine, the feathery chassis doesn’t feature high grade metals, but instead opts for sturdy plastic construction, with this particular model looking resplendent in its bright blue livery.

Colours have become the current vogue in Chromebooks, with HP decorating its creations with a variety of bright hues, and alongside this azure beauty Asus offers variations in yellow, red, or black. We’re glad to see this sense of fun back in PC manufacturing, and if you were thinking of buying a Chromebook for your children or teenagers, then we’re sure they’d prefer one of these to the rather staid neutral options that dominate the market (much like cars, in fact).

Under the covers you’ll find the usual compliment of 32 GB SSD, 2GB RAM, integrated Intel graphics, all under the guidance of an Intel Bay-Trail Celeron 2.16GHz dual-core processor. For the most part this arrangement works well, with the C300SA moving along at a steady clip when working on documents, browsing the internet, and listening to streamed music.

It did tend to slow down occasionally though, especially with several tabs open at once or attempting to buffer large HD movies, and while this can be said of most Chromebooks, it did take the shine off of an otherwise excellent user experience.

The display might be larger than many of its rivals, but shares the same 1366×768 resolution found on pretty much all its rivals. For everyday use this is more than enough. Sure, you won’t have the crisp, almost paper quality of modern iPads, but you can read everything perfectly clearly, and Youtube looks fine.

Viewing angles though are more of a problem. The TN screens that keep Chromebooks so affordable also mean that colours are often pale, and you only have a small margin where the visual sweet spot can be found. Again, it’s acceptable, and makes a lot of sense when you look at the price, but we’d be happy to pay a bit more for an IPS screen that would really make the device come alive.

In use the C300 is a comfortable machine to type on thanks to a spacious keyboard that features the simple, uncluttered layout that we’ve grown to love on Chromebooks. This is complemented by a large multi-touch trackpad that’s smooth and responsive, executing multi-finger gestures without delay. The only real complaint were the large stickers plastered over the interior, which feel very 1990s now. Ports are also in plentiful supply, with a USB 3.0 and USB 2.0 aperture on either side, plus HDMI and SD card slots. The extra girth also allows for a bigger battery, which lasted an impressive nine and a half hours in our tests.

While ChromeOS is a good fit for 11.6in displays, thanks to its minimalistic design, the extra space offered by the C300 is welcome. After changing the settings to zoom into 125 percent we found text remained comfortable to read and websites displayed perfectly while filling the screen. If the current trend of HD displays with smaller fonts is a pain for your eyes, then this could be a fine way to avoid squinting in public.

One happy surprise was the powerful speakers placed under either side of the wrist rest areas. The usual bass compromises are in force, but the C300 projects an impressive amount of clear, loud volume that avoided distortion even when we threw some death metal at it. You won’t hear any deep, sonorous tones, but for YouTube and movies on your lap it’s a very useful addition.