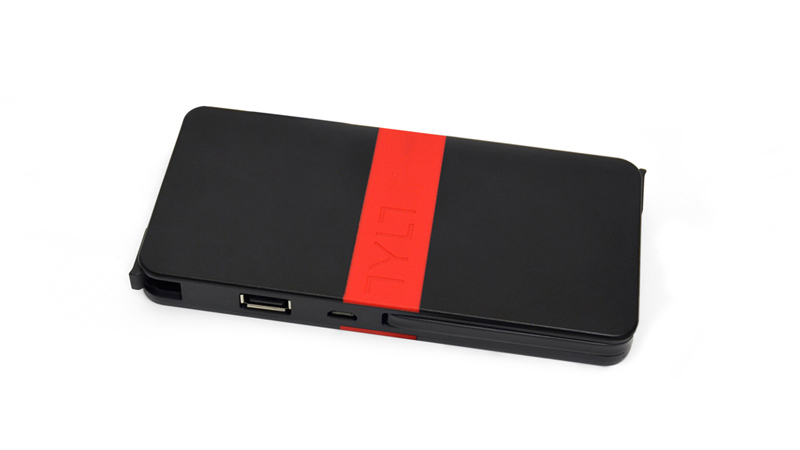 Even bearing in mind the extra expense of licensing Apple’s proprietary Lightning cable, the Tylt Energi 5K+ battery pack is overpriced. It’s small capacity might be acceptable to some people, but not at this high price. If you can find it significantly cheaper, it could be worth buying, but there are lots of cheaper alternatives available right now.

Today’s busy lifestyle with its multiple devices has made portable chargers a crucial travel accessory for many people, keeping our smartphones and tablets charged on the go.  In order to keep your various electronics juiced, Tylt has released the stylish Energi 5K+.

For the best options for keeping you topped up, check out our list of the best portable USB chargers.

It has to be said that the Energi 5K+ is pretty to look at – as far as these devices can be – and there’s a choice of red, blue or grey highlights. The rest of the casing has a semi-gloss finish.

At just over 160g, it’s also not too heavy. It’s light enough to pocket without dragging down your trousers, and its 70x142mm dimensions put it at around the same size as a 5in smartphone, albeit twice as thick.

Technically, the Energi 5K+ is also very sleek; it comes with captive microUSB and Lightning charger cables that wrap around the device to clip neatly into the body. There’s also a full-size USB output for charging a third device, a microUSB input for recharging the Tylt battery itself and a power button/LED indicator to indicate charge level.

The capacity of this battery pack is, however, a fairly major stumbling block. The 5200mAh rating may be bigger than the average smartphone, but it’s paltry compared with competitors such as the EC Technology 18000mAh battery pack, which offers well over triple the power.

When we tested it, the Tylt Energi 5K+ charged a Samsung Galaxy Ace 2 two and a half times from empty. An additional feature touted by the company is the pack’s 3A circuit, allowing you to charge three devices at once, including a tablet.

That’s all well and good but when we connected three devices, the Energi 5K+ was only able to charge an iPad mini from 50 to 90 percent, an Android smartphone from 60 to 100 percent, and a Samsung Galaxy Tab S 8.4 from empty to 25 percent. It’s enough to top up three empty devices, but we’d expect three full charges at this price.

The charge time of the Energi 5K+ was around what the manufacturers claim, taking between six to seven hours to fill up from empty. That’s a long time, considering the small capacity.

Even taking into account the relatively high build quality, clever design and extra cost of licencing the Lightning cable, the Energi 5K+ is expensive at £65. The EC Technologies portable battery pack costs less than half that, making it considerably better value even if you have to supply your own cables. It isn’t alone: there are plenty of other low-cost options such as the Lumsing 10400mAh Power Bank.