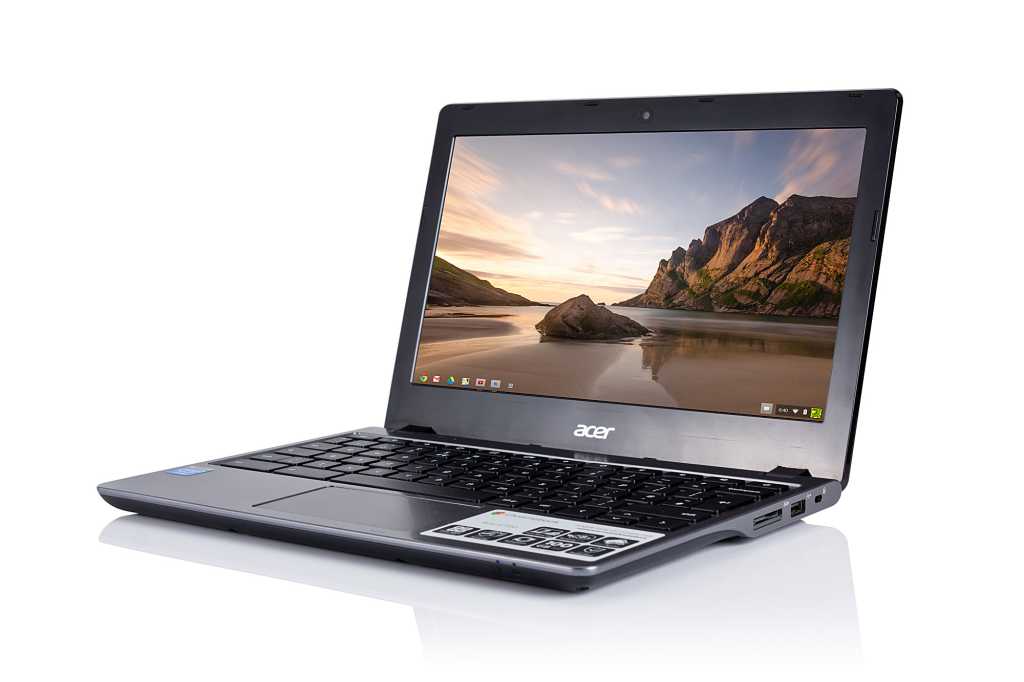 The C720 doesn’t excel in any particular department, but it scores highly enough in most of them to make it a good all-rounder. Lightweight, fast, cheap, and actually quite a cool looking device. The keyboard is a little underwhelming, but for the money it’s a very easy machine to recommend.

Acer has recently supplanted Samsung as the number one seller of Chromebooks worldwide, mainly due to the success of the C720 range. This particular variant of the C720 sits at the entry level point of Acer’s Chromebook range, eschewing the touchscreens that adorn its more expensive brethren. This means that the price is just £199, for which you certainly get a good deal of useful technology. See also: Which laptop to buy: laptop buying advice, and the best laptops.

As you might expect the casing is of course plastic, finished in a smart, bluish grey that does a fair job of simulating metal while feeling strong enough for day to day usage. This choice of material also has the advantage of making the C720 a lightweight 2.76lbs, so throwing it in your backpack and heading out for the day doesn’t end in sore shoulders. For a cheap, little machine it also packs a fair amount of ports, with HDMI, SD card reader, and two USB slots, one of which is USB 3.0.

While many of the first Chromebooks on the market arrived with ARM chips at their centre, Acer has taken a different path and decided to equip its C720 range with Intel Celerons. These particular 1.40GHz chips (2955u) are based on Haswell technology, which results in increased battery life when compared to Acer’s previous C7 Chromebook. The manufacturer claims an impressive 8.5 hours running time, which isn’t too far off the 7hrs we managed in testing. Not bad at all.

That Haswell magic also gives the C720 a nippy feel when running a few open tabs. Google Play music was happy to stream in the background while we browsed Amazon and Facebook, but like many Chromebooks things become a bit stodgy if you get too greedy or add video into the mix. The 2GB of RAM probably doesn’t help, and this is an area we’d like to see increased as the platform develops, but one thing to bear in mind is that the speed of your internet connection will significantly affect the general performance.

Something the web can’t alter is how the C720 feels under the fingers. We’ve been very impressed by keyboards on a few Chromebooks in the past (with the Samsung 2012 and HP 11 both having excellent typing surfaces) but the one here feels a little shallow and spongy. It’s not bad, as such, but it doesn’t quite match up to the competition, and the choice Acer made to conjoin the Enter and Hash keys is disappointing. The touchpad is fine though, and handles multi-touch gestures with efficiency and little drama. There are no separate buttons for left and right click, but we’ve grown used to the two finger tap to open the right click menu now, and actually prefer that method.

Another area where money has been saved is the display. We don’t expect IPS panels or 4K resolution on such a cheap machine, and we certainly don’t get it. Instead there is an 11.6” Active Matrix TFT Colour LCD, which is bright and clear. Colours are a little dull, the 1366 x 768 resolution leaves a few icons looking slightly jagged at times, and viewing angles are limited, but like most things on the C720 it’s decent and totally usable on a daily basis. You could also happily take the device and a USB flash drive loaded with movies to entertain yourself on a transatlantic flight.

Chrome OS itself has developed nicely over the past couple of years, to the point where it feels complete enough to use on a daily basis. Offline capabilities for Google Docs also make it a more robust work machine. The multi-touch gestures enable smoother navigation, while the general simplicity of the OS lets you get on with things without distraction. For a great many people, this will be more than enough.