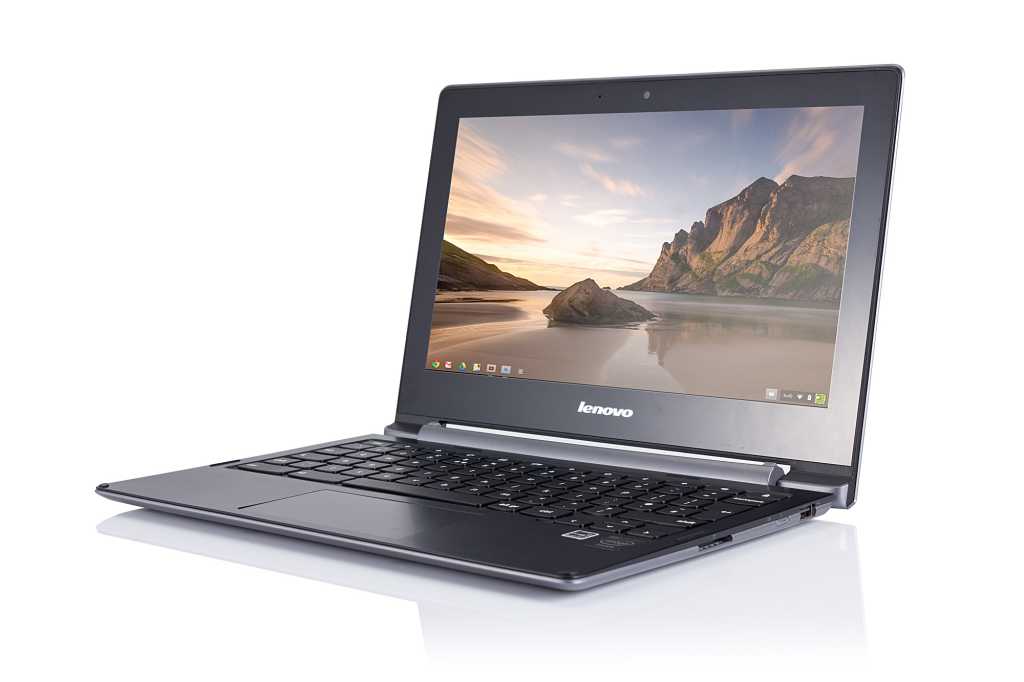 The Lenovo N20p is a bit of a disappointment. Visually it’s a very attractive, compact, and smart machine. The touchscreen is useful, and the specs make for a decent experience. This is all ruined by the poor keyboard which proved a constant frustration. Fix that, and this would be a great device.

In recent years Lenovo has sailed past its competitors to become the number one manufacturer of PCs in the world. It’s good to see then that Chrome OS still gets some love from the Chinese giants, with the new N series. This model, the N20p, sits at the top of the range thanks to its multi-touch screen and flexible hinge. See also: Which laptop to buy.

Lenovo first introduced the idea of a laptop that could convert into a tablet style device, when it released the Yoga series a couple of years ago. Now this technology has found its way onto a Chromebook for the first time.

The idea is simple. Inside the chunky hinge is a mechanism that allows the screen to fold back three hundred degrees, essentially turning it into a freestanding display (held in place by the upside down keyboard laid out behind). The keyboard is also disabled when in this mode, to avoid any random keypresses. In theory this is a cool way to make a laptop more tablet-like, and is presumably intended for when you want to watch videos or use the device in presentations.

A few flies find their way into the ointment though, due to the simple fact that a) the normal laptop setting also allows the screen to sit up unaided; and more tellingly b) you’re suddenly reduced to onscreen controls for volume, which on the YouTube app equates to some kind of sadistic torture. The screen itself is bright and reasonably colourful. We’ve noticed that touchscreen models seem to have a bit more life in them than their rather dulled counterparts, although the 1366×768 resolution remains a constant across the Chromebook range.

The touchscreen, as we found when we reviewed the Acer C720p, is a positive feature. With Chromebooks being such internet focused machines, the user experience makes sense straight away. There are no hidden Charms bar to find or new menus to contend with, instead you just browse the internet in a normal fashion, but tap on the screen when you want to select an option. Simple, easy, actually useful. In operation the screen is responsive to finger gestures, with resizing happening swiftly and with no noticeable lag. It might seem like a luxury on a Chromebook, but it’s a really handy option, especially in the rather odd Yoga mode.

With Lenovo being the company behind the excellent ThinkPad keyboards, we hoped some of that magic would effect the Chromebook. Well, in looks at least, the typing surface is smart and spacious, but after using it for a while you can see visible flexing on the left side of the board. In fact the whole chassis bends worryingly under light pressure and the shallow key response means that letters are often missed when typing. It’s quite frustrating to use and very disappointing, as this is truly an area where the company usually shines. By contrast the touchpad is big, fast and reliable. (See also: 22 best laptops: What’s the best laptop you can buy in the UK?)

Chromebooks are much of a muchness internally these days, and the N20p is no exception except where the memory is concerned. Most models feature a modest 2GB of RAM, but this device packs double that. It does seem to give the system a subtle boost in terms of speed, but it’s marginal and of course heavily influenced by the speed of your internet connection.

Eschewing the previous trend of ARM processors, Lenovo has opted to fit a 2.16GHz Intel Celeron N2830, which belongs to the Bay Trail family of CPUs. These are known to be energy efficient chips, which proves to be true with the N20p lasting for seven and half hours in our looped movie test. In Sunspider, the N20p wasn’t amazingly fast with a result of 807ns. It was a similar story in our other browser benchmarks, with 1318 in Peacekeeper, and 2186 in Browsermark.

Storage is still small, with a 16GB SSD nestled inside, but in standard fashion Google gives you 100GB of free Google Drive space for two years when you register your new machine.