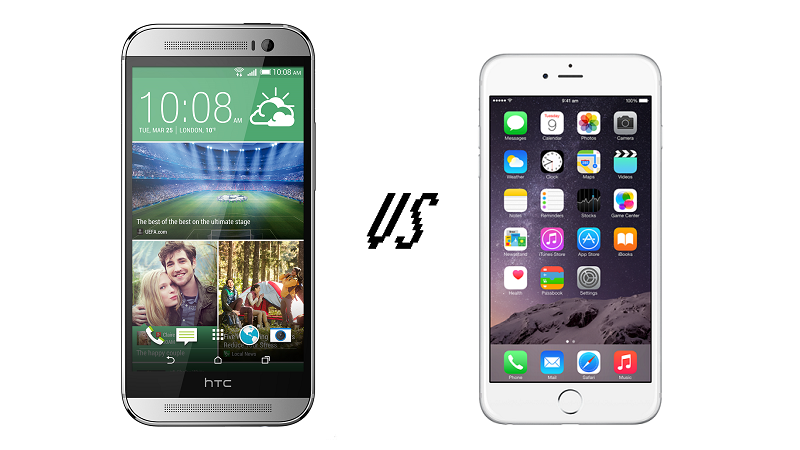 If you’re looking for desirability, then you can’t go wrong here. Android and iOS is the biggest difference here and it’s worth noting that the iPhone 6 is behind the HTC One M8 in many specs even though it costs more.

In case you hadn’t heard, Apple is launching the iPhone 6 and iPhone 6 Plus and here’s where we compare the flagship device with one of the best Android smartphones around. Find out what the difference is in our iPhone 6 vs HTC One M8 comparison review. See also: The best smartphone you can buy in 2014.

Please note that we haven’t got our hands on an iPhone 6 yet but we’ve been well informed by colleagues in the US. This article will mostly compare specs of the two.

The HTC One M8 was a similar price when it launched but since it’s been around for a few months you can pick it up for around £429 from retailers like Amazon. That’s a saving of more than £100 so read on to see whether it’s worth paying extra for the iPhone 6.

iPhone 6 vs HTC One M8: Design

Apple loves making its devices thinner and lighter with each new generation and the iPhone 6 is more slender than the HTC One M8 at 6.9 mm and 129 g compare to 9.4 mm and 160 g. That’s a reasonable difference and it’s worth noting that neither Apple nor HTC goes in for a dust- or water resistant design.

If you’re looking for desirability and build quality then you’ve come to the right place as the iPhone 6 and HTC One M8 are two of the most luxurious and premium smartphones money can buy in this area. Both use a brushed aluminium case and the iPhone 6 now has a more curved design like the HTC One M8.

In general we’ve found iPhones to be a little too delicate requiring a case if you want to avoid spoiling the exterior. It remains to be seen whether the iPhone 6 continues this trend (we need to have one for a few weeks at least), however, the HTC One M8 doesn’t beg for protection.

Coincidence or not, both phones are available in essentially the same three colours (under different names): silver, grey and gold – although the silver HTC One M8 does not have a white front like the iPhone 6.

iPhone 6 vs HTC One M8: Screen

The big news with the iPhone 6 is a larger screen, following the trend we’ve seen in Android and Windows Phones. It’s 4.7in up from 4in and if that’s not big enough, the iPhone 6 Plus has a phablet sized 5.5in screen.

The HTC One M8 has a slightly larger screen than the iPhone 6 at 5in and it has a higher resolution too, at Full HD 1080p meaning a pixel density of 441ppi. Apple has opted for an odd sounding 750 x 1334 resolution which means the 326 ppi of the  Phone 5s is retained.

iPhone 6 vs HTC One M8: Processor and memory

Apple has introduced its new A8 chip with the iPhone 6 which it claims has 25 percent more CPU power and 50 percent better efficiency than the A7. The new M8 co-processor can identify what type of activity you’re doing, estimate distance and, with the introduction of a barometer, knows details on elevation change.

Apple doesn’t state the amount of RAM but we understand that it’s 1 GB compared to 2 GB on the HTC One M8 which has, like other high-end Android handsets, a Qualcomm Snapdragon 801 processor. The quad-core chip has a clock speed of 2.3GHz and HTC also has a co-processor for counting steps and features like Motion Launch Gestures (double tap to turn the screen on etc).

iPhone 6 vs HTC One M8: Storage

Although you’ll have to pay a lot for it, the iPhone 6 is available in a new 128 GB storage capacity. It also comes in 16- and 64 GB so the 32 GB model has been dropped from the line-up. As per usual, Apple doesn’t offer expandable storage via a microSD card slot.

The HTC One M8 offers less choice which just 16- and 32 GB models with the latter much harder to come by than the standard one. However, unlike the original HTC One, has a microSD slot which can take up to 128 GB which may be a big deal for some users.

iPhone 6 vs HTC One M8: Wireless

Apart from the larger screen size, many iPhone 6 headlines have been about the addition of NFC. At long last, the iPhone finally has that little wireless chip but there’s a huge catch: you can only use it for ApplePay. This may change in the future but unless it does, you won’t be able to use the iPhone 6’s NFC for pairing, transferring files or any other related tasks.

Apple has alos upgraded the Wi-Fi to the 11ac standard which is good news. The HTC One M8 has both 11ac Wi-Fi and NFC which isn’t restricted. As you’d expect, both have 4G, Bluetooth 4.0 and GPS but neither has wireless charging.

iPhone 6 vs HTC One M8: Other hardware

Features above and beyond the usual are quickly becoming one of the main ways to differentiate smartphones which often have an identical or similar set of core specifications.

In Apple’s favour is the Touch ID fingerprint scanner which was introduced with the iPhone 5S and, of course, makes its way to the iPhone 6. The HTC One M8 doesn’t have a fingerprint scanner but it has an IR blaster for controlling other gadgets like TVs and impressive front facing stereo speakers (BoomSound).

iPhone 6 vs HTC One M8: Cameras

For photographers, it may be a surprise that Apple has stuck with an 8Mp iSight camera on the iPhone 6. However, it hasn’t been completely left alone and now has phase detection autofocus, digital image stabilization and slo-mo video at 240fps (double that of the iPhone 5S).

It has the usual features such as HDR and panorama but is limited to 1080p video at 60fps so there’s no 4K here and neither is there on the HTC One M8 which hits the same limit. It has a slightly unusual rear Duo Camera which compromises of a 4Mp main camera alongside a second senor which captures depth information so users can refocus images after they’ve been taken. Both phones feature a dual-tone LED flash.

On the selfie side of things then the HTC One M8 is more appropriate with a 5 Mp front facing camera which can shoot video in up to 1080p at 30fps. The iPhone 6’s Facetime HD camera may have improvements like better face detection and a burst mode but is 1.2 Mp and limited to 720 p video.

iPhone 6 vs HTC One M8: Software

It’s probably obvious but software is one of the major differences here and really the biggest decision to make if you’re deciding between the two.

The iPhone 6 comes pre-loaded with iOS 8 although the mobile OS will roll out to older iPhones, too. While the HTC One M8 runs Android 4.4 KitKat with the firm’s own Sense 6.0 user interface. Each has their pros and cons and its down to personal taste as to which is more suited. If you’re not already loyal and invested in one then we suggest trying both out to see which you prefer.