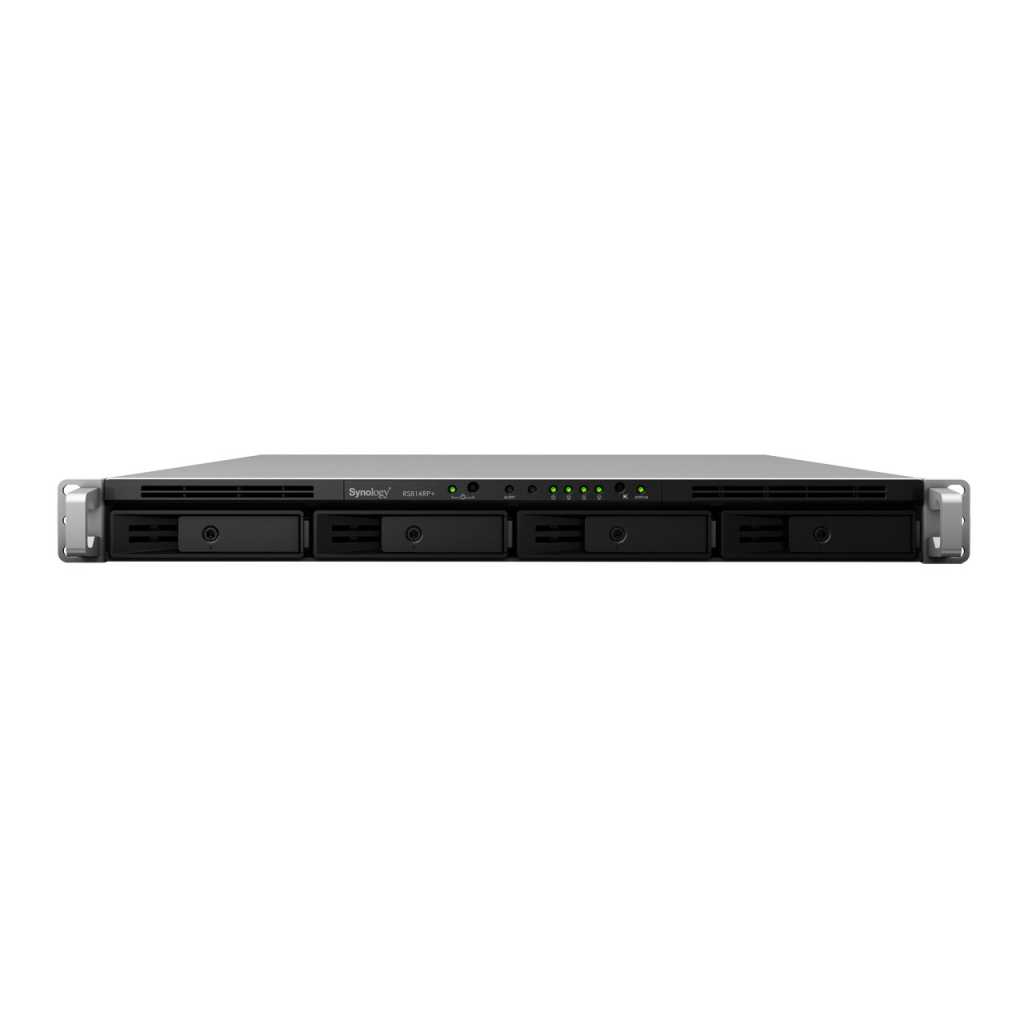 Synology’s RS814RP+ is a relatively low-cost alternative solution for modest 4-bay rack-mount NAS needs. It’s still scalable in storage size and offers an approachable admin interface that will be more intuitive for unskilled network administrators. Our benchtest results suggest it’s squeezing the most out of the available low-power Intel Atom, and should be relatively inexpensive to run in energy terms. Given the handsome combination of hardware and software it deserves closer investigation for small businesses looking to scale up their storage requirements.

Synology is best known for its desktop network-attached storage (NAS) boxes, versatile storage products for small businesses and home power users. Less familiar may be the company’s range of rack-mount storage servers, aimed at larger businesses that may already have racks populating their server rooms. (Read all NAS drive reviews.)

The largest and most powerful rack-mount NAS drive in Synology’s range is the 10-bay RS10613XS+, powered by an Intel Xeon processor. Down at the entry-level for its rack storage is the 2-bay RS214, while the RS814 is its 4-bay counterpart.

There are three versions of the Synology RS814 to choose from today. They share the same chassis and construction, and differ in the processor, memory and PSU specification.

The simply named RS814 takes an ARM processor from Marvell, a 1.33 GHz dual-core Armada XP chip, and includes 1 GB of memory. The ‘plus’ models meanwhile have 2.13 GHz Intel Atom processors, the long-running D2700 variant that has been in the company’s top multi-bay desktop NAS drives for the last two years. We were loaned the RP variant, which has a second, redundant power supply, designed to instantly step up if the first should fail in use.

Prices start at around £460 for the standard RS814, £650 for the RS814+ and £1000 for the RS814RP+ reviewed here, all supplied empty of any drives. Many retailers also sell Synology NAS drives pre-configured with various disk drives inside.

The RS814RP+ is a 1U-high rack-mount file server, measuring a 430 x 574 mm, a huge size by domestic standards but a typical layout for enterprise-level networking kit. It’s a solidly constructed all-metal unit, in contrast to its desktop DiskStation range which are more plastic in construction.

Its disks are mounted flat, four across the width of the chassis, in removable bays which can be hot-swapped with the unit running. These are removed by levers and can be secured against accidental removal by a splined hex key.

Rack-mount finger pulls are included for optional attachment, while a rail kit is available at extra cost (RKS1314, around £60) to allow the entire unit to be easily slide out from inside cabinet.

Build quality is very high, with important maintenance features you’d expect of a professional high-availability design. The self-contained and individually fan-cooled power supplies can be slide out and replaced after simply pushing a lever, while the main motherboard with supporting electronics also slides out the back after loosening two thumbscrews. This can then be replaced in seconds if required for minimum downtime in event of failure, assuming you have a spare on standby.

Common across the entire Synology range NAS drives, largest to smallest, is the Linux-based Synology DSM operating system. Currently at version 5.0-4493, the DSM software this year received an overhaul of its graphical interface that now aligns it closer to the look of Windows 8 and iOS 7.

Particularly for a professional product, this lurid-meets-pastel tribute to Microsoft and Apple’s user interface design trend looks misplaced on a pro device. But it’s arguably the most consistent and beautifully rendered NAS admin interface on the market today, and doesn’t have some of the usability issues of the Windows and iPhone, such as concealed interface elements.

Beyond its technicolor square-cornered skin, it’s eminently usable, providing easy access to the key features and parameters that a company sysadmin may need, without falling back to a CLI console. There is still an option of course for logging in via SSH.

The listed feature set for business users is comprehensive. For Windows-reliant workplaces there’s Windows ADS integration, and Windows ACL is said to be applied across all access entries.

For running virtual servers, the unit is certified compliant with VMware vSphere, Citrix and Microsoft Hyper-V virtualisation services. Enabling faster data access is the DSM’s support of iSCSI with SMB.

Thanks to four gigabit ethernet ports it’s possible to configure the unit for NIC failover redundancy, or for link aggregation to bust a single gigabit LAN’s limited throughput. Synology advertises 330 MB/s reads and 196 MB/s writes – over SMB in Windows with a RAID 5 array – with the help of such multiple port setups.

As with Synology’s desktop units, you can expand total storage capacity with a processor-less expansion box. The Synology RX410 (around £450) resembles an RS814 from the front, but is a passive chassis that connects to the main rack NAS through a locking eSATA port.

The choice of an Intel Atom processor provides a balance between performance and power consumption. Compared to desktop- and server-class chips like the Intel Core series, it draws a little less mains power, even if its performance is considerably slower than the latter processors. But compared to a mobile-class Core i5, for example, we can see little reason to persist with a netbook chip, besides the rock-bottom wholesale pricing.

But an Atom is still much faster than the even cheaper ARM Marvell processors found in budget consumer NAS boxes, as well as the standard RS814. There’s one potential advantage on choosing the latter ARM solution though, besides further reduced electricity bills – hardware encryption.

The Intel Atom D2700 does have a built-in encryption engine on its die but Intel will not provide any of the essential documentation required for its use with a Linux OS. Marvell is not so closely allied to Microsoft and does allow its chips’ hardware encryption to be put to use, so if you wanted to secure the contents of your disks this could be the only workable solution. You could try the software-based encryption offered by DSM but this would likely bring the RS814+ to an unusable crawl.

For system memory, the RS814RP+ includes 2 GB as standard, upgradeable with a second SO-DIMM card to 4 GB total. Note that the use of a budget Atom processor means ECC memory is not an option.

We tested the RS814RP+ after loading with four 3 TB Seagate Barracuda 3.5-inch SATA disks. These were configured in RAID 5, leaving a total usable capacity of 8.11 TB. Tests were run in Windows and OS X using SMB and AFP network protocols over a single gigabit LAN connection.

Using CrystalDiskMark in Windows 7 we measured both sequential reads and writes at about 107 MB/s. We would expect this was limited more by the gigabit interface and gigabit router. At the smaller 512 kB-file level the NAS was still operating at 98 and 101 MB/s for reads and writes respectively. And with 4 kB random data, both reads and writes measured a decent 10 MB/s.

Sluggish small-file transfers have improved greatly with Synology’s latest implementation of AFP, now measured at 14.1 and 6.6 MB/s for random 4 kB reads and writes. When averaged with files from 4 to 1024 kB size, the overall figures returned were 62 and 53 MB/s.

As important for good all-round performance, small-file transfers remained quite speedy here at 63 and 51 MB/s, averaged with the same 4-1024 kB random file set.

System power consumption was harder to gauge. The Synology RS814RP+ seems to demand that both power cables are connected at all times, else a continuous high-pitched piercing alarm will sound. But it seemed both PSUs were in constant use, as we measured 29 W draw from one and 35 W from the other, by alternating our single mains power meter between reboots.

The 35 W idle figure on the left-hand PSU rose to 38 W with the NAS under a multiple file copy/read/write load, fitted with the same four low-power Seagate Barracuda disks.

For a server-room rack unit, the RS814RP+ was not especially intrusive from the sound of its collection of three 35 mm high-speed cooling fans and two more 40 mm fans for the two PSUs.

You can adjust between Cool Mode and Quiet Mode from DSM settings, the latter indicating a switch to a slower speed. There’s no indication of fan RPM speed though, and we could not detect any audible difference between settings. Also see: Best NAS drives.