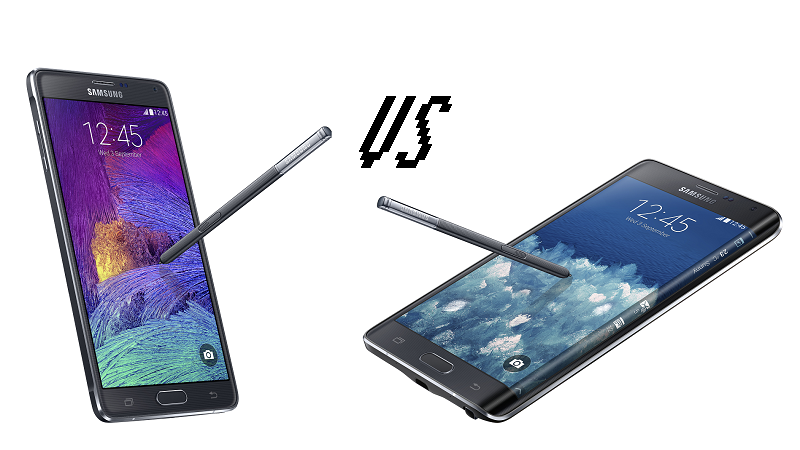 Apart from some minor differences like storage and battery size, the Galaxy Note 4 and Galaxy Note Edge are separated by the curved screen feature. We don’t think it’s a gimmick but you need to decide whether it’s worth paying an extra £100 for.

The Galaxy Note 4 is a premium high-end smartphone so it’s no surprise to see it with a price tag of £550 at Clove. With its unique display technology (see below), you’ll have to pay an extra £100 for the Galaxy Note Edge. Clove does warn that official prices are to be confirmed but we don’t think these numbers will be far off.

We’ll update this when official prices are available but it’s certain than the Galaxy Note Edge will cost more than the regular Note 4. Find out if it’s worth the extra money by reading on. Read next: Samsung Galaxy Note 4 hands-on review.

The big different between the two new Galaxy Note smartphones is the screen, as the name suggests. While the Galaxy Note 4 has a traditional touchscreen, the Galaxy Note Edge’s display curves round one side of the device.

Samsung calls it the ‘edge screen’ and it has the ability to show different content to the main part of the display. It can show the user various different things from the time, to app icons, to notifications to buttons while using an app in landscape mode. Furthermore, the edge screen can be used separately to the main part of the display which can subsequently be off or underneath a cover.

We had a play with the Galaxy Note Edge at IFA 2014 in Berlin and think that it’s not just a gimmick and could be a really useful feature on a day-to-day basis.

Aside from the edge screen, the displays on the Galaxy Note 4 and Galaxy Note Edge are almost the same. The Note 4 still has a 5.7in screen size and it’s only marginally smaller on the Note Edge at 5.6in.

Samsung uses its own Super AMOLED technology and both devices use a Quad HD resolution so join the  LG G3 it this club. Due to the edge screen the resolutions are slightly different: the regular 1440 x 2560 on the Note 4 and 1600 x 2560 on the Note Edge. This does mean a smaller difference in pixel density – 524 ppi vs 515 ppi – but that’s nothing to be bothered about.

The edge screen is the main difference between the two new Galaxy Note smartphones so should be how to decide between them (if you can afford the luxury). Although the phones are pretty much the same otherwise, there are a few small differences so read on.

When you buy a smartphone, we’re sure that which colour you choose is an important decision – unless you always opt for black no matter what the device. For those who care about it, the Galaxy Note 4 offers more choice with black, white, gold and pink while the Galaxy Note Edge is only available in black or white.

With both being 2014 Galaxy Note phablets, there’s little else to talk about in terms of design as the pair look essentially identical apart from that curved side on the Note Edge. However, despite that additional feature, the Edge is actually thinner and lighter than the Note 4 – although not by much at  8.3 mm and 174 g against 8.5 mm and 176 g. The Galaxy Note Edge is a little wider than its sibling but isn’t as tall.

Both of these smartphones have a microSD card slot which can take up to 128GB cards but they are different when it comes to internal storage. The Galaxy Note 4 is only available in a 32GB edition but the Galaxy Note Edge adds a 64GB capacity (which will probably be harder to find).

Another small difference is two alternative battery sizes. The Galaxy Note 4 has a larger capacity at 3200 mAh while the Galaxy Note Edge has a 3000 mAh capacity. We can’t help but feel with the edge screen, the Edge will offer poorer battery life but we’ll have to wait and see.

The remaining specs of the Galaxy Note 4 and Galaxy Edge are the same so you’re going to get a 2.7 GHz quad-core Qualcomm Snapdragon 805 processor or Exynos 5433 octa-core processor (we’re not sure which models are hitting which markets yet) and 3GB of RAM.

Each has a 16 Mp rear camera with optical image stabilisation and the ability to record video in 4K quality. At the front for all those selfies and snapchats is a 3.7 Mp camera which can record 1080p video.

Being Galaxy Note devices, both the Note 4 and Note Edge come with the Samsung S Pen stylus and the accompanying software such as Air Command. Both ship with Android 4.4.4 KitKat and the TouchWiz interface. Of course, the Note 4 doesn’t have any software or settings for the edge screen, though.