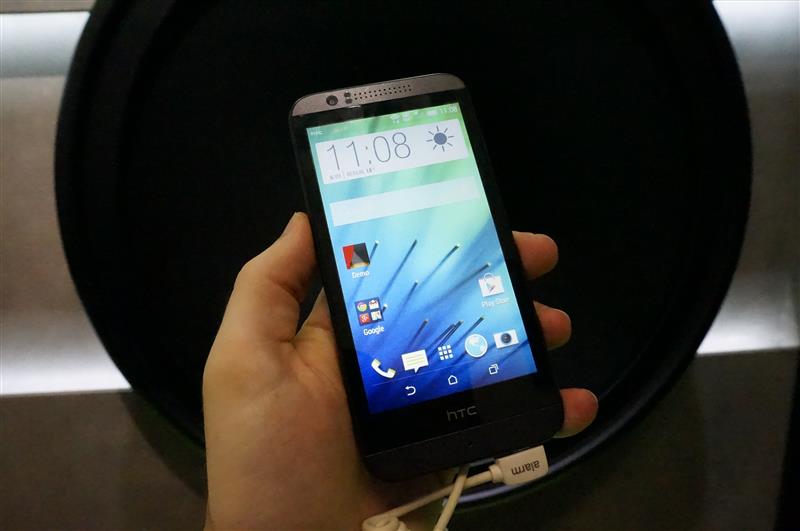 It’s a shame about the screen and the cameras on the HTC Desire 510, because aside from that it’s a strong contender in the budget smartphone market. We’re looking forward to putting the Desire 510 through some speed test to see how it compares with rivals, though.

Where the HTC Desire 510 shines is its price. It’s the cheapest 4G-compatible smartphone from HTC to date at £149, which is more than EE’s £99 Kestrel 4G smartphone, but around the same as the popular and impressive-for-the-price Motorola Moto G.

The Desire 510 is expected to be available to buy at some point this month, so there’s not long to wait if the budget 4G phone sparks your interest. See also: HTC Desire 820 hands-on review

As it’s a budget device, it’s no surprise to see a plastic back on the HTC Desire 510. While not unattractive, it does look quite obviously cheaper than its HTC Desire 610 sibling, which costs £239. It still has those large bezels at the top and bottom, though, making the overall size of the device unnecessarily big, which we’ve always found frustrating.

It weighs 158g so is a bit on the heavy side too, especially considering that its 4.7in display is smaller than many thinner and lighter flagship smartphones.

However, that screen is a bit disappointing when it comes to resolution. It’s just 854 x 480, which means a low pixel density of 208ppi, which is noticeable as soon as you start using the phone. The second-generation Moto G offers 294ppi, so boasts a much nicer display for the money.

Inside the HTC Desire 510 is the new Qualcomm Snapdragon 410 1.2GHz quad-core processor with 1GB RAM, which could mean it’s slightly faster than many of its rivals with the older Snapdragon 400 processor. It should offer good speed and power for the price. We’ll bring you full speed tests and benchmark results when we get the HTC Desire 510 to our labs, but during our brief period of time spent with the device we found it to be smooth and responsive.

There’s just 8GB of built-in storage, but that’s expandable by up to 128GB thanks to a microSD slot, which is slightly annoyingly hidden beneath the back cover of the device so is a bit fiddly to access.

Aside from the 4G LTE, which is a big selling point for this cheap smartphone, the HTC Desire 510 offers Bluetooth 4.0, WiFi (though not the faster 11ac standard), GPS and DLNA when it comes to connectivity. There’s no NFC or IR Blaster, but that’s not surprising for a budget device.

The HTC Desire 510 runs the same Android 4.4 KitKat with HTC’s Sense user interface, which comes with several HTC built apps and features including BlinkFeed. We rather like HTC Sense, with its clean, minimalist design and easy to understand navigation.

There’s no word yet on whether HTC will bring the upcoming Android L update to the HTC Desire 510, but we’ll update you when we find out.