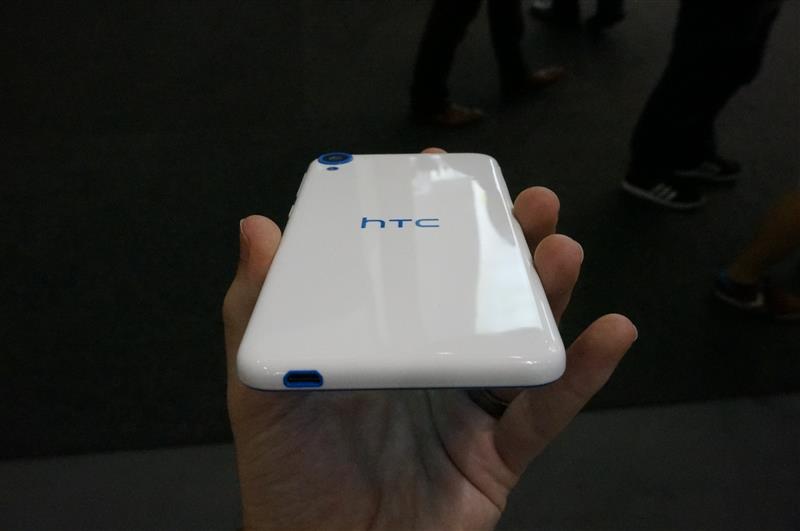 We’re waiting for an official UK price but we can predict the Desire 820 will cost around £300 and that’s pretty good for a nice looking albeit plastic smartphone with a 13Mp rear camera and a 64-bit Octa-core processor ready for Android L. Look out for a full review soon.

IFA 2014 doesn’t bring many new products for HTC but the new Desire 820 is one of two new smartphone from the company as a cheaper alternative to the flagship One range. Here’s our HTC Desire 820 hands-on review. See also: Best 40 smartphones you can buy in 2014.

HTC continues to keep the Desire range going and the Desire 820 is a follow-up to the Desire 816. We’re not sure when it will launch but we’re told it will cost €320 so we expect it to be around £300 in the UK.

The Desire range now offers a HTC One style design but in a plastic shell, making it more affordable. Much like Apple offers the  iPhone 5C as a cheaper plastic alternative to the iPhone 5s. It’s thinner and lighter than its predecessor.

HTC has used a new production process which it calls ‘double shot colour technology’. This essentially allows to different colours of plastic to be squished together and form a seamless casing. We think it looks pretty cool.

Colours include Marble White, Tuxedo Grey, Santorini White, Milky-way Grey, Tangerine White, Saffron Grey, Flamingo Grey, Blue Mist, and Monarch Orange but we’re not sure which ones will be available in the UK yet.

It’s a big phone so look for other Desire handsets if this is too big but we found the Desire 820 is nice and light and feels like a well-made phone. HTC claims the double shot colour technique of creating the case makes it stronger.

There’s no change when it comes to the screen on the Desire 820 when compared to its predecessor, the 816. That means it remains at 5.5in (pretty big) and 720p resolution. We’d rather a better than HD resolution especially on a screen this size but appreciate this impacts both price and battery life.

A significant upgrade comes in the form of the new Qualcomm Snapdragon 615 processor (from a Snapdragon 400), which is not only Octa-core but is 64-bit so that’s great for when Android L arrives.

There are other improvements, too such as double the amount of storage at 16GB and a little more memory at 2GB of RAM. A microSD card able to accept up to 128GB cards remains a good feature.

The Desire 820 supports 4G LTE networks (Cat 4) but doesn’t have the kind of extra features which you’ll find on more premium device such as an IR blaster and 11ac Wi-Fi, but it does have BoomSound front facing stereo speakers.

Cameras a better than one might expect for the mid-range price with 13Mp at the rear and a whopping 8Mp at the front for selfie fans. The rear camera does stick out a little which is a shame.

As you would expect from a phone launching in the second half of 2014, the Desire 820 comes pre-loaded with Android 4.4 KitKat and when Android L comes along this will make full use of that 64-bit processor.

As usual, HTC puts its Sense overlay on top of Android and it’s the same version you’ll find on the One range – HTC Sense 6.0. We’ve always liked Sense and while it’s clean, stylish and easy to use, HTC does do things a little bit different with an alternative grid view recent apps menu and a vertical scrolling list for the main app menu.

Sense 6.0 includes features such as BlinkFeed, HTC Zoe and support for the firm’s DotView case.