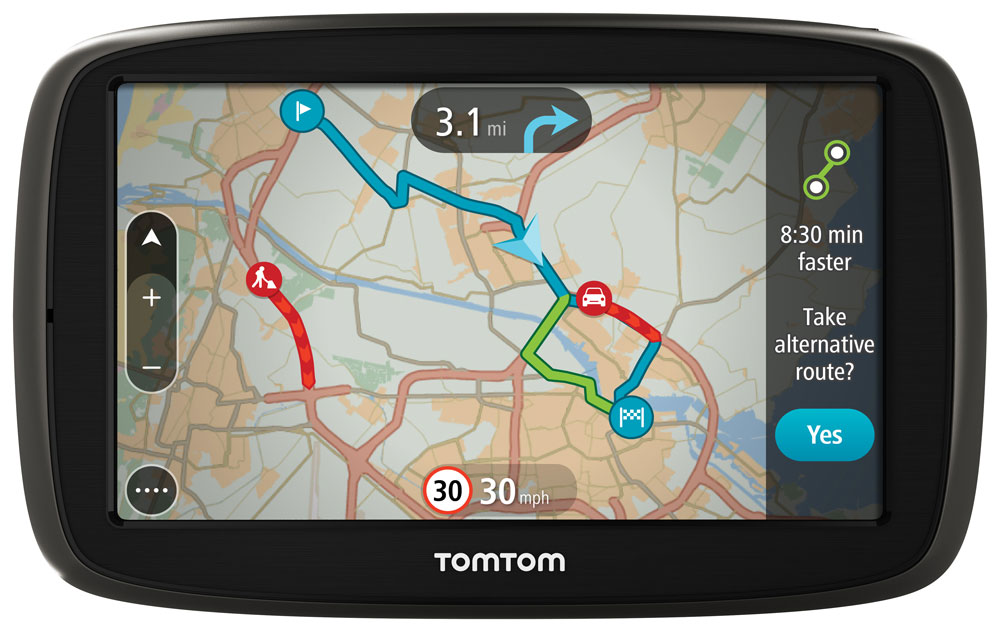 The TomTom Go 50 is a great satnav with lots of useful features, including voice recognition that doesn’t require you to touch the screen. You’ll need a compatible smartphone and data tariff to make the most of it and benefit from timely information on traffic jams and the fastest route. It’s generally easy to use, and it’s reassuring to have free map updates. If you don’t need full maps of Europe and can live with a slightly smaller screen, the Go 40 is cheaper.

The TomTom Go 50 is a 5in satnav that’s preloaded with maps for the whole of Europe, and has TomTom’s latest interface. Here’s our TomTom Go 50 review.

Do you still need a standalone satnav these days? If you own a smartphone, it will probably have a satnav app and do a reasonable job of getting you from A to B. However, few smartphone satnav apps are as fully featured as the Go 50, nor are as easy to use. See also: all satnav reviews

It’s set apart from cheaper units by its ability to communicate with either an Android phone or an iPhone via Bluetooth in order to receive up-to-the-minute data on road conditions, and isn’t limited to its built-in database of points of interest. Live traffic is available for free for life as are updates to the mapping data, for 39 European countries. Also available is warnings of safety cameras, both mobile and fixed but free updates are only available for three months so you’d have to take out a subscription when that period expires if you want to keep the database up to date.

In the box you get a USB cable and cigarette lighter adaptor for in-car charging. The Go 50 itself is well built and the mounting bracket offers a good amount of adjustment and a firm grip on your windscreen. On turning it on, we were taken directly to a map showing the car’s current position with an indication of nearby traffic conditions. TomTom make a big thing of this, since other units take you first to a main menu.

The bad news is that the Go 50’s screen is a resistive touchscreen. The matt finish means that there’s barely any glare or reflection but you need to press the screen firmly to get a response. We found this ok for the most part, but the keyboard feels a little cramped compared to most smartphones and is much less accurate. You have to force yourself to slow down and press each key rather deliberately.

The menu system gives you many options, but you need to scroll through these with your finger because they are not all displayed on a single screen. This is where the screen really struggles as resistive screens don’t lend themselves to swiping gestures and we often found ourselves hitting the wrong menu option.

However, this annoyance is somewhat offset by the voice recognition which can be initiated by speaking a phrase, in this case “Hello TomTom”. This makes it a sensible proposition while driving and, we found it reasonably useful, even in the presence of road noise and the radio turned on, albeit quietly. Like the Garmin nüvi 2599 LMT-D, it refused to recognise some addresses. However, since specifying a destination often requires you to select an option from a list of addresses presented on screen, it makes more sense to select a destination on screen before setting off and use voice control only for making simple adjustments while driving.

With some niggles out of the way, let’s look at the Go 50’s highlights. The screen is big enough and is easy to see even in bright sunlight. It dims when it detects night driving or when traveling in tunnels.

We particularly like the new interface, which uses more of the display for the map, and shows real-time traffic information so you can see which routes are currently busy.

The navigation screen is split into two sections. The majority shows you your position on the map, while a strip on the right-hand side gives you the usual information like the ETA and how far away you are from your destination.

The bar also gives shows you what’s coming up ahead, and how far until you reach events or places. You get live traffic warnings (including a great Jam Ahead warning), upcoming points of interest like petrol stations, and even weather warnings.

We found this very useful on our long test drive through France, and were pleasantly surprised how well it warned us of heavy rainfall ahead. We got a few errant traffic warnings that turned out to be nothing, but in general, the warnings were useful.

Colour coding means you can see at a glance how bad the traffic is, and there’s an estimate at the top of the bar which indicates how long a delay there is.

The map is more interactive than before, so as well as showing your stored favourite locations, you can also tap on a location to get options to quickly navigate there, add to the current route or perform a local search.

Certain cities are mapped in 3D, giving you more visual cues for navigation as you can see buildings around you and landmarks. Buildings are set back from the road and side streets are made more prominent, which really helps in situations where you’re unfamiliar with the area and there’s extra pressure. However, you’re unlikely to see many 3D buildings unless you drive regularly in major cities.

As we said at the start, the Go 50 is a ‘smartphone connected device’. Instead of having a built-in SIM like older TomToms, the new range relies on your smartphone for a data connection.

It won’t use all that much, but it will require your phone to offer a personal hotspot feature so the Go 50 can connect to it via Wi-Fi. You’ll need to make sure you have a tariff that allows tethering – using 3G or 4G data on a different device – and also one that works abroad if you want to get real-time information when you’re not in the UK.

Considering you can buy the TomTom Go 50 for under £130 if you hunt around online, it’s good value and a great satnav with lots of useful features. As long as you have a compatible smartphone and tariff, you’ll benefit from timely information on traffic jams and even bad weather. It’s generally easy to use, and it’s reassuring to have free map updates as well as offline maps which mean you don’t need a 3G signal to complete your journey as on some smartphone apps.