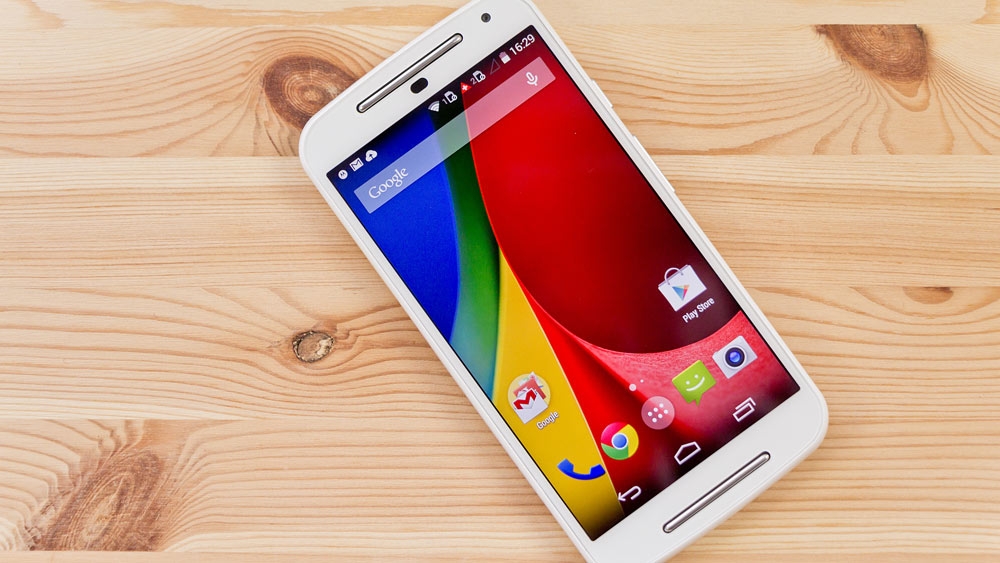 With a bigger screen, much better speakers and improved cameras, the new Moto G is a great budget smartphone. The lack of support for 4G will be a deal-breaker for some, though. It isn’t without its rivals, but if you’re specifically looking for a budget dual-SIM Android phone, it’s a good choice.

No sooner than Motorola updated the original Moto G with 4G and a microSD card, there’s another update: the Moto G. That’s right – a completely new smartphone with the same name. Confusing, much.

The second-generation Moto G, which we predicted would be called the Moto G2, is easier to find online by searching for its part code: XT1068. Visually, though, the 2014 model is easy to tell apart from the original (and revised 4G version) thanks to the prominent front-facing speakers and larger 5in screen.

UPDATE: The new Moto G will officially go on sale on 15th September, and you’ll be able to buy it from various places SIM-free, including Amazon, where you can pre-order it now.

The new Moto G costs £149.99, and that’s for the 8GB version, which is all you’ll be able to buy in the UK. Motorola is now selling the smartphone directly from its website, and it isn’t much more expensive than the revised 4G Moto G, which you can pick up (in 8GB format) for £130. We’re sure that discounts will be available soon from other retailers.

The new Moto G addresses feedback Motorola received from the original and has a bigger screen, better speakers and dual SIM card slots. Unfortunately, support for 4G has been dropped, so this phone is limited to 3G.

Design-wise, the new Moto G follows the original almost exactly. There’s no metal and no disguising the plastic finish: it feels cheap compared to the plastic iPhone 5C. However, let’s not forget the massive chasm in price between the two smartphones.

Buttons and ports are in the same places, and the back is removable to reveal both SIM slots and the microSD slot (which will accept cards up to 32GB).

It’s bigger than its predecessor in width and height, but not in depth – it remains the same at roughly 11mm. Weight is practically the same, too, at a shade under 150g. The handset is well balanced and feels lighter than you’d expect.

There are two colours: black and white, and you can buy coloured rear shells for £10.99 in the following colours: Chalk, Black, Violet, Spearmint, Raspberry, Royal Blue, Turquoise and Lemon Lime.

Flip shells have a magnetic front cover  which turns the Moto G on and off when you open and close it. These cost £22.49 and come in Chalk, Black, Royal Blue, Turquoise, Lemon Lime and Cherry.

The smartphone isn’t much bigger overall, but the 5in IPS display feels like a nice upgrade over the 4.5in of the original. Even so, it’s a tiny bit disappointing that the resolution is still 1280×720, meaning a drop in density to 294ppi (compared to 329ppi).

It’s still a great screen, though, with vivid colours and great viewing angles. Brightness is decent enough, but not the brightest around.

Oddly, there’s no upgrade in the processor department. The Snapdragon 400 quad-core chip runs at 1.2GHz and has the Adreno 305 graphics processor. That means performance is the same, which is to say it’s very good, especially at this low price.

In Geekbench 3, we saw an average score of 340 (single-core) and 1144 (multi-core). These are practically identical to the original Moto G’s scores, which were 334 and 1168 respectively.

In GFXbench 3, the Moto G returned 11 frames per second in the T-rex test, exactly the same as the old model – no surprises there.

Web browsing performance is measured using Sunspider 1.0.2, in which the new Moto G managed an average of 1526ms, marginally slower than the original at 1504ms.

In the UK, the new Moto G will be available in 8GB and 16GB versions, and both will have dual SIM slots. The bad news is that 4G is not supported. If you need faster mobile internet, you’ll have to either go for the the revised first-gen Moto G or look elsewhere entirely.

The handset has the basic specs you’d expect elsewhere: 802.11n Wi-Fi, Bluetooth 4.0 and GPS. Note that the Wi-Fi is at least dual-band, so will work with dual-band routers that support 5GHz as well as 2.4GHz.

Compared to the single rear-facing speaker of the original Moto G, the new front-facing speakers are superb. Just like HTC’s BoomSound, the second-generation Moto G’s sound is excellent. There’s no need to turn up the volume so much – and annoy people sitting opposite you – since the audio is directed straight at your ears.

They’re not great for music, but when playing games and watching videos on YouTube or iPlayer, you’ll really appreciate both the stereo separation and the decent quality.

The good news is that the mediocre cameras have been upgraded, with an 8Mp sensor at the rear, and 2Mp at the front. There’s an LED flash at the back, as before (the old Moto G is on the right with a red rear shell).

The bad news is that video is still shot at only 720p, which is strange as 8Mp is more than enough for 1080p.

You can check out the quality for yourself, but suffice to say, the photos are a lot better than the videos. One slight disappointment is that the images from our test Moto G weren’t sharp to the edges of the frame. For the most part, you won’t notice this, but when you zoom in on photos, it’s easy to spot. We’ll test a second phone to see if it’s just our sample or not.

Instead of using Google’s own camera app, you get Motorola’s. It’s easy to use and includes panorama and HDR modes. You can tap to focus and tap and hold to take photos in burst mode

The HDR mode can be set to auto, on or off. It makes a huge difference in the right circumstances – it’s easy to see the improvement in the photo on the right below.

It’s worth bearing in mind that the app defaults to 16:9 photos, which crops the top and bottom and uses only 6Mp of the sensor’s resolution. If you want the full 8Mp, switch to 4:3 mode which gives you those missing top and bottom sections. You can see the crop in action in the comparison below: you can see the spires on St Pancras in the full-resolution, uncropped photo.

Video, as shown in the clip below, lacks detail even considering the 720p limit. It’s not as jerky as some smartphones we’ve tested recently, but there’s no optical stabilisation either.

Audio is recorded in stereo and is usable enough. If you want to have a bit of fun, there’s a slo-mo video mode which also records in 720p. It’s best to hold the phone still rather than moving it about in this mode, though, as you’ll get jerky footage otherwise.

Here’s how the old and new Moto G compare. First the old version (click to enlarge)

And this is the new, second-generation Moto G (note the wider-angle lens as well)

Here’s what the original Moto G photo looks like at 100 per cent:

And the new Moto G:

One of the benefits of buying a Motorola smartphone is that you essentially get plain Android. There’s already a guarantee of an upgrade to Android L when it launches, but it ships with KitKat 4.4.4.

Given the lack of any overlays or customisations, there isn’t too much to talk about. One point worth noting is that there are no hardware or touch-sensitive buttons – the usual Android trio are on screen and you have to swipe to display them in certain apps, such as when using the camera.

You do get Motorola’s useful app Migrate, which helps transfer all your stuff from an old Android smartphone, or an iPhone. Plus, you also get Motorola’s Assist app which can automatically detect when you’re driving and read out incoming text messages. Using Google Now you can even dictate a reply without touching the phone. Assist also has a sleep mode which silences the phone between ‘quiet hours’ that you set, a Meeting mode which uses your calendar to work out when to keep quiet and a ‘Home’ mode which will read out text messages so you don’t have to pick up the phone.

If you’re considering the new Moto G for its dual-SIM slots, bear in mind that the old model was also available with two slots – if you can find one.

The benefit of this new version is that it’s very easy to switch between SIMs, and an Intelligent Calling feature will learn which numbers you call from each SIM and automatically switch to the appropriate SIM. You can manually select the SIM to use, but pop-ups will offer messages such as “You called this number on the other SIM last time. Do you want to switch?”.

We’ve now had a few days to properly test out the Moto G’s battery life. The good news is that it’s pretty good. With light use, it lasted exactly two days before demanding a recharge. That light use involved around an hour of watching YouTube, an hour of web browsing, several phone calls and some emails.

With a bigger screen, much better speakers and improved cameras, the new Moto G is a great budget smartphone. However, the lack of 4G, no processor upgrade nor a boost in screen resolution means it’s arguably not as good value as the original Moto G was when it launched. That’s also because the new Moto G has considerably tougher competition to deal with. There are cheaper options if your budget won’t stretch this far, but if you’re specifically looking for a budget dual-SIM Android phone, it’s a good choice. If you absolutely need 4G, then the revised first-generation Moto G is still a worthy contender.