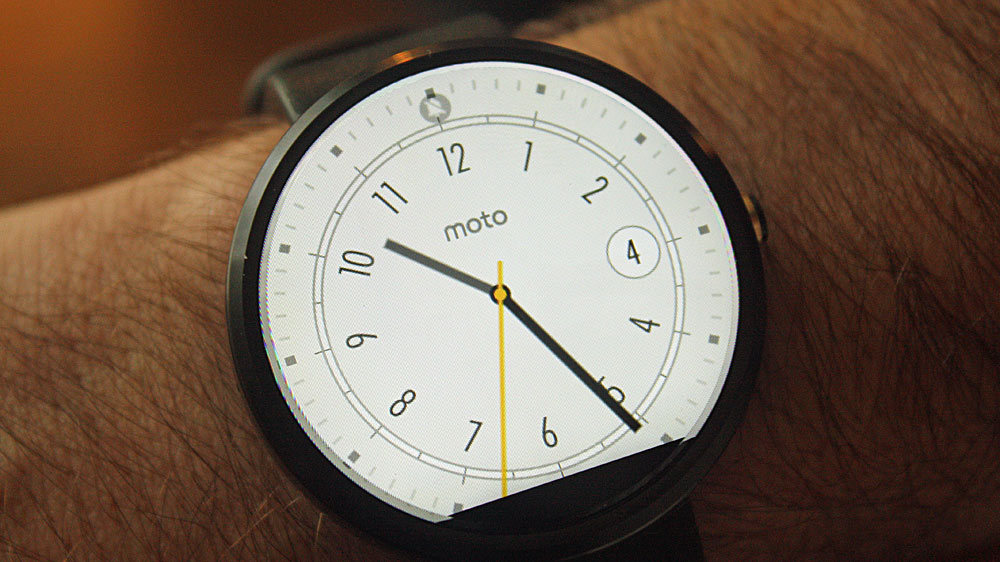 The Moto 360 is a fantastic smartwatch with excellent build quality, luxurious design and an affordable price tag. However, it’s not flawless with one day battery life, a lower resolution screen which is tainted by the black section at the bottom. It will also be too big for some users. Despite the flaws, it’s the best smartwatch we’ve reviewed to date but watch out for the LG G Watch R, Asus ZenWatch and Apple Watch.

After months of accumulating hype, Motorola has finally launched the Moto 360, a round Android Wear smartwatch. Find out if the wearable gadget was worth the wait in our Moto 360 review. Updated on 04/11/14. Read: The best smartwatches of 2014: List of the best wearable tech you can buy right now.

Moto 360 review: Price, competition and where to buy

Android Wear is still in its relative infancy so we’ve only seen a few devices which run this operating system that’s tailored for smartwatches. Others include the LG G Watch and Samsung Gear Live.

They cost £159 and £169 respectively, with the circular Moto 360 commanding a higher price: round screens aren’t exactly ten a penny yet. However, at £199 the device isn’t quite as expensive as we’d expected – about £50 cheaper in fact. It’s not a bad price for a top-end Android Wear smartwatch.

You can pick the Moto 360 up at Motorola’s website or retailers including Amazon, John Lewis and O2. Most of which have it as ‘out of stock’ or ‘coming soon’, though. Amazon has it in stock but is charging £249 so we would avoid buying from there.

The Moto 360 has some competition in the form of the LG G Watch R and Asus ZenWatch. The LG rival is priced a little more but the ZenWatch is likely to be cheaper.

The hype surrounding the Moto 360 has mainly been around its design. It looks more like a regular wristwatch rather than a wearable gadget.

Update January 2015: Motorola has announced three new designs which will launch mid-February (light and dark) and mid-March (gold). They will cost £229.

Motorola says this ‘maximises the display area while ensuring a comfortable fit’. It’s certainly more comfortable than the square smartwatches we’ve seen and it’s leagues ahead in terms of desirability.

The black stainless steel case and ‘world-renowned’ Horween black leather strap give it a luxurious feel which makes the price seem even better. It’s also available in silver with a grey strap. There’s a Gorilla Glass 3 front and like other Android Wear smartwatches, the Moto 360 has an IP67 rating which means the device is dust and water resistant: you can wear it in the shower, or even swim in it for up to 30 minutes up to a depth of 1m.

On the side of the watch, pretending to be a traditional crown, is a button which can be used to switch the screen on and off. Tapping the screen or twisting your wrist will also bring it to life as will covering it up to switch it off.

The Moto 360 isn’t heavy but one caveat with the design is that the watch is quite large, both in thickness (11.9mm) and overall size. This means it’s a lot larger than a traditional women’s wristwatch. The strap fits ok but some females will be put off by the bulk of the Moto 360.

Motorola is probably kicking itself after it was announced the Apple Watch will come in two difference sizes.

On the hardware side of things, we’re getting used to a pretty standard set of components for Android Wear smartwatches. To this end, the Moto 360 has Bluetooth 4.0 Low Engery, 4 GB of internal storage and 512 MB of RAM.

It has a slightly different processor, though, so instead of a Qualcomm Snapdragon, Motorola has opted for a Texas Instruments OMAP 3 chip. As well as the usual sensors like an accelerometer and pedometer, it also has an optical heart rate monitor which is more of an additional feature than a standard piece of hardware.

Of course, the main difference in this area is that round screen and this is probably the main reason to buy the Moto 360 over rivals – although bear in mind that the LG G Watch R also goes down this route.

While you’ll get a crisper image elsewhere, the Moto 360’s display is far from poor quality. There are a couple of downsides to point out though.

Firstly, Motorola has decided to use a small part of the watch to put an ambient light sensor so the display can automatically adjust the brightness. This means the screen isn’t completely circular, with a black section at bottom which sort of looks like it’s broken – hence the 290 vertical pixels.

When there are no cards, which ever watch face you’ve chosen has a chunk missing at the bottom which looks a bit naff. It’s less noticeable with black watch faces, of course. You’ll eventually get used it, but it’s enough to stand out and taints an otherwise uninterrupted design.

You’ll notice that the Gorilla Glass front has a bevelled edge which looks great but causes a moiré effect meaning you can see a faint jagged line of red, green and blue pixels (you can see this in the images below). It’s a subtle effect which is slightly magnified by the glass which some may not even notice but others may be bugged by it. While we’d rather it wasn’t there, we have become more accustomed to it over time.

The main downside of the Moto 360 is the battery life. At 320mAh, the battery has a smaller capacity than the LG G Watch (400 mAh) but a considerably worse life span. While we got a few days out of the G Watch, the Moto 360 will realistically only last one and require charging every night.

Making the situation slightly better and more bearable is the fact that the Moto 360 comes with wireless charging. A docking station is included in the box and we’ve found the smartwatch charges pretty quickly – from 0- to 100 percent in just over an hour.

You’re not going to wear the Moto 360 while you sleep so if you place the charging dock on your bedside table, it provides a neat place to keep it overnight and it will, of course be full charged and ready to go in the morning. While the Moto 360 is in the charging dock it handily displays the time and charging status.

As we’ve mentioned several times already, the Moto 360 runs  Android Wear which is Google’s mobile operating system redesigned and custom made for smartwatches. You’ll need an Android smartphone running version 4.3 or later to pair the device with. Check if you device is compatible by visiting g.co/WearCheck in the web browser. Watch our video: How to set up a Google Wear smartwatch to see how the companion app works.

Although there are other operating systems around on smartwatches such as Samsung’s Tizen, Android Wear is the best in our opinion and an obvious choice for Android users. We’re not going to go into huge detail about the OS here as it’s essentially the same across all devices which run it. For an in-depth look at Android Wear, read our LG G Watch review.

What’s important to say here is that the Google Now card style interface works perfectly well on the round display and you get the advantage of choosing round watch faces. AS we said early, it’s just a shame they get cut off at the bottom where the screen stops.

The pre-loaded ones look sleek but you can also download more such as the ‘Secret Agent’ one modelled on James Bond’s watch in the N64 game, Goldeneye.

The heart rate monitor means there’s a section for daily activity beyond just steps. Your goal is to do 30 minutes of increased heart rate exercise per day. You can also check your current heart rate any time you like.

As you’d expect, you can use voice recognition as you can on an Android smartphone to send a text message or email, meaning that it’s possible to reply to incoming messages without typing.

Using Google Now is much like using Siri on an iPhone. You can ask it to set an alarm or reminder for a specific time and date as well as asking more general questions such as “how tall is the Shard?” or “how many millimetres are there in an inch?”. You can ask for weather forecasts in different cities, too.

The Moto 360 is a fantastic smartwatch with excellent build quality, luxurious design and a price that puts it within reach for more people than we exptected. However, it’s not flawless: battery life could be better, screen resolution could be higher, and its sheer size will make it too big for some. Despite these, it’s the best smartwatch we’ve reviewed to date but watch out for the LG G Watch R, Asus ZenWatch and Apple Watch, which we’ll review as soon as we can.