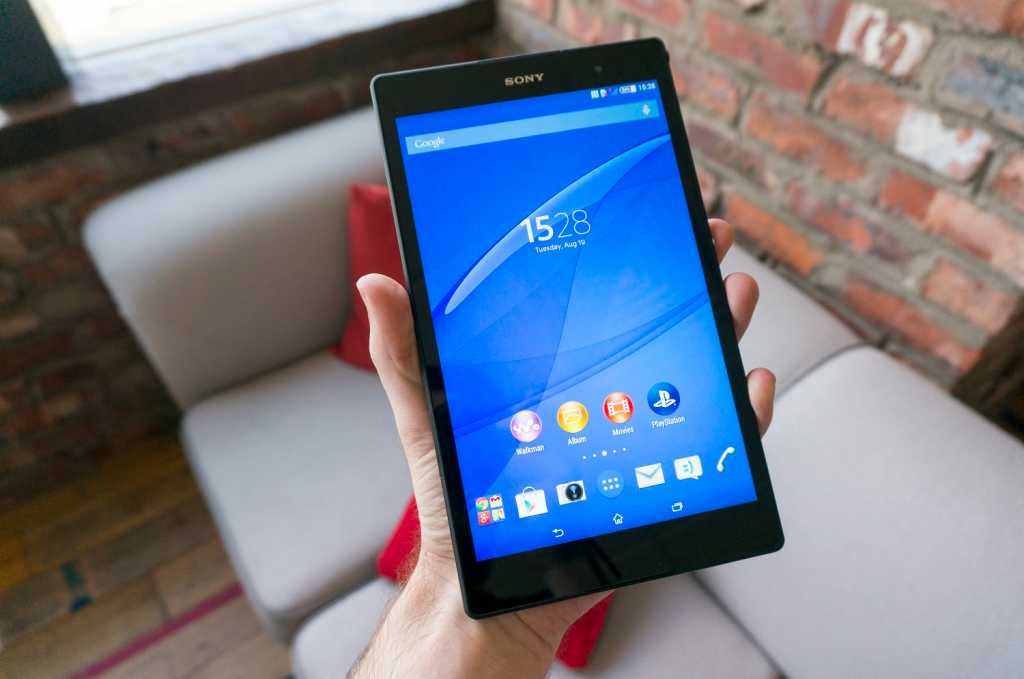 It’s great to see Sony finally make a smaller tablet and the 8in form factor is proving to be increasingly popular. The Xperia Z3 Tablet Compact is super thin and light and is waterproof to boot. Hardware is decent but not mind-blowing and while rivals like the Galaxy Tab S offer a bit more gadgetry, Sony offers High-Res audio and a killer feature for gamers in the form of PS4 Remote Play. It’s a great effort from Sony if you’re looking for a high-end 8in tablet.

Sony has only made a few tablets over the last few years so we’ve had to wait a long time for a smaller size to rival the  Nexus 7 and iPad mini (among others). Here’s our hands-on review of the new Sony Xperia Z3 Tablet Compact. See also the  best tablets of 2014.

It may be a bit of a mouthful and what the Xperia Z Ultra should have been when it launched, but Sony has finally satisfied our desire to see a smaller non-10in tablet. It’s called the Xperia Z3 Tablet Compact and starts at a £329 meaning it’s more expensive than the iPad mini 3 and Samsung Galaxy Tab S 8.4. However, Amazon is already offering it a discounted price of £309 which is better but the Tab S is now £265.

The main design element is the size of the tablet, Sony fans can now choose 10in or 8in and this is one seriously thin and light 8in tablet. We were impressed by the new  Samsung Galaxy Tab S 8.4 which is 6.6 mm and 294 g but Sony has trumped this at 6.4 mm and 270 g. It’s mainly bragging rights between the two but the fact is Sony has done a great job here.

It’s almost like holding a phone because the device is so slender – holding it one-handed is a breeze. The stainless steel frame looks great and we like the rounded curves of the cover. The Xperia Z3 Tablet Compact will be available in black or white only.

The device doesn’t have a glass rear cover like its smartphone counterpart but is still dust- and waterproof. Instead, it has a soft touch plastic rear cover which matches that of the Xperia Z2 Tablet. This may not look quite as impressive but provides much better grip. Waterproofing means slightly fiddly flaps (apart from the headphone jack) but they do hide everything neatly away, too.

Its IP68 rating is something which you typically won’t find on other tablets and may be a big advantage – there’s nothing stopping you watching BBC iPlayer in the bath or taking underwater photos of sea life while snorkelling.

Like the Z3 smartphones, the tablet has nylon corners in case of drops.

As we’ve mentioned the Xperia Z3 Tablet Compact has an 8in screen putting it in direct competition with tablets like the iPad mini, Galaxy Tab S 8.4 and LG G Pad 8.3. Sony has opted for a Full HD (1920 x 1200) resolution instead of anything higher but the screen looks nicely crisp and has the advantage of Sony’s TV tech like Triluminos with Live colour LED.

The screen offers decent viewing angles and it’s a good tablet for switching between portrait and landscape depending on what you’re doing. It’s also great to see front facing stereo speakers although they do distort fairly badly when the volume is at the upper end.

Inside is a Qualcomm Snapdragon 801 quad-core processor which is the same as previous Sony devices like the Xperia Z2 Tablet but the chip is clocked higher at 2.5GHz. Alongside this is 3GB of RAM and we can report smooth performance during our time with the tablet.

AS you can see below, the Z3 Tablet Compact benchmarked very similar results to the Galaxy Tab S winning mainly on graphics due to its lower resolution.

In terms of storage, there are 16- and 32 GB models (11GB available after firmware on the former and 26 GB for the latter) but Sony offers a microSD card slot for adding up to 128GB.

There’s an optional LTE model if you want 4G data while out and about via a nano-SIM card slot although this doesn’t seem to be available from Sony’s own store so you’ll have to look elsewhere.

Wireless includes 11ac Wi-Fi, NFC and Bluetooth 4.0 LE but no IR Blaster for taking control of device like TVs. There’s also no wireless charging but there is a dock connector on the side if you wish to buy a compatible accessory – Sony’s official Magnetic Charging Dock DK39 costs £39.

A new feature to the Xperia Z3 range is support for High-Res audio (including DSD files). If you don’t own such files, Sony’s DSEE (digital sound enhancing engine) HX technology promises to upscale content to ‘near High-Resolution quality’.

If you’re into tablet photography then the Xperia Z3 Tablet Compact has a pretty decent 8.1 Mp rear facing camera with an Exmor RS sensor – about on par with the Galaxy Tab S 8.4. However, the high quality 2.2 Mp front camera is arguably more useful for video calls.

You can play around with plenty of camera apps like Sound Photo, AR fun, Face in, Multi camera and more. Using the Superior auto mode will automatically mean 6 Mp 16:9 photos and Full HD video so if you want the full 8 Mp (at 4:3), switch to manual mode.

Above is out test video for the Z3 Tablet Compact – taken on a very dull and windy day.

Sony hasn’t done much in the way of software but the Xperia Z3 Tablet Compact does come with the latest Android OS in the form of 4.4.4 KitKat –an upgrade to Android L will come in due course. Also see: 27 best Android tablets.

The user interface is much like previous versions found on Xperia devices. It’s close to stock Android but with Sony styling and apps such as Walkman. App icons are bigger, you can double tap to switch the screen on which is a boon but there is one key new feature which will set gamers’ hearts racing.

The user interface is much like previous versions found on Xperia devices. It’s close to stock Android but with Sony styling and apps such as Walkman. There is one key new feature which will set gamers’ hearts racing, though.

The Z3 Tablet Compact comes with PS4 Remote Play so owners of Sony’s next-gen console can play fully fledged games on the device with a DualShock 4 controller over the same Wi-Fi network. You can buy a mount which clips onto the controller if you like (above). The feature has also been made available to the Xperia Z2 range via a software update giving those users less reason to upgrade.