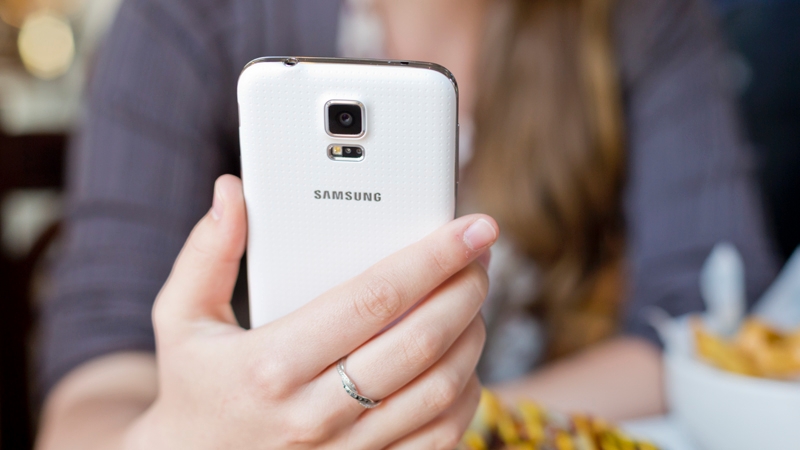 Arriving a good six months after the Samsung Galaxy S5, it’s no surprise that the Samsung Galaxy Note 4 has significantly faster hardware. It’s important to note, however, that all flagship smartphones are now very fast, and the chances of the average user being able to tell the difference between them is minimal. However, what might sway you in the new Note’s favour is its larger, higher-resolution screen and potentially longer battery life. Whether it sways you enough to part with an extra £200 over the S5 will depend on your budget.

The Samsung Galaxy S5 was unveiled at February’s Mobile World Congress, and its price has since dropped from its £599 RRP to as little as £413 SIM-free at Amazon at the time of writing. This means there will be a significant difference in price between the two smartphones when the Note 4 launches but, like the S5, we expect its price to drop considerably within a few months. Also see Samsung Galaxy S5 review.

If you’ll be getting either handset free with a contract this is unlikely to bother you, but it’s worth pointing out that the cheapest way to buy any phone is SIM-free, and then pair it with one of the best SIM-only contracts.

While the Samsung Galaxy S5 mini is very much a more compact version of the standard S5, the Galaxy Note 4 won’t simply be a larger version of that same flagship smartphone. Indeed, rather than adopting that cheap plastic dimpled rear, the new Note is expected to follow in the footsteps of the Samsung Galaxy Alpha with a metal chassis.

Also, like its predecessor the new Note 4 will come with Samsung’s S Pen – now improved to work more like a real pen. The S5 is not supplied with a stylus.

While the S5 is available in Charcoal Black, Shimmery White, Electric Blue and Copper Gold, the Note 4 swaps that blue option for pink.

The fingerprint scanner, heart-rate monitor and IP67-rated dust- and waterproof protection found in the S5 and S5 mini has also been added to the Galaxy Note 4.

New to the Note 4 is a UV scanner.

Not only is the 5.7in Note 4’s screen significantly larger than the 5.1in panel of the Galaxy S5, it will also be much higher in resolution. While the S5 has a full-HD (1920×1080) display, with a pixel density of 432ppi, the Note 4 will have a Quad HD screen with a whopping 2560×1440 resolution and 515ppi density. A variant of the Samsung Galaxy Note 4 – the Samsung Galaxy Note Edge – will also be available, and features a 160-pixel curved edge to the screen.

Forget what Apple says about the human eye not being able to see individual pixels once you get past a certain point. We’ve seen Quad HD before in the LG G3, and you really can’t appreciate how awesome is the difference until you see HD, full-HD and Quad HD side by side.

Samsung will use Super AMOLED display technology for the Note 4, and like the S5 it will reveal vibrant colours and have decent viewing angles.

The Note 3 blew the competition out the water when it launched last year, and we have complete faith in the Note 4 doing the same. It’ll run a 2.7GHz Snapdragon 805 processor with a huge 3GB of RAM and Adreno 420 graphics. Its performance will be blistering – check back soon to find out exactly how fast is the new Note 4.

The Samsung Galaxy S5’s 2.5GHz Snapdragon 801, 2GB of RAM and Adreno 330 graphics are meagre by comparison, although the S5 revealed some stunning performance in our benchmarks.

In Geekbench 3, for example, the S5 achieved 926 points in the single-core test, and 2869 in multi-core; in GFXBench 3.0’s T-Rex we saw 28fps; and in SunSpider the Galaxy S5 turned in 824ms. See how these scores compare in our article: What’s the fastest smartphone 2014.

Whereas the Samsung Galaxy S5 comes in versions with 16- or 32GB of storage, and includes a microSD slot that lets you add up to 128GB, the Note 4 will be available with 32GB of storage. It, too, will feature a microSD slot (although this supports only 64- rather than 128GB), and with either phone you’ll be able to make use of cloud storage.

The same rear camera will be fitted to the Note 4 as to the S5, and you can expect the Camera app to feature the same filters and modes. That’s a 16Mp snapper with a dual-LED flash and autofocus, also able to capture video – UHD at 30fps, full-HD at 60fps and HD at 120fps.

The S5 is also fitted with a 2Mp front-facing camera for selfies and video chat. The Note 4 upstages this with a whopping 3.7Mp front camera with an f1.9 lens and special camera modes such as Wide Selfie.

When the Note 4 launches it will, like the S5, be running Android KitKat. When Android L is released later this year both will be upgraded.

Samsung overlays its own user interface, too. On the S5 you get the latest version of TouchWiz, which features a redesigned Settings menu that is easier to navigate and now features rounded colourful icons, as well as new quick access features and the ability to hide (if not uninstall) preinstalled apps.

Meanwhile, on the Note 4 Samsung has made some tweaks to make widgets transparent and allow you to more easily customise the lock screen.

We’ll be able to get a proper look at the Note 4’s software when we get it in our hands at IFA 2014. Look out for our Note 4 hands-on review toward the end of next week.

One of the plus points of the Note 3 over the S4 is its larger-capacity battery, and this is a trend we expect to continue with the Note 4. The battery is removable (meaning you can swap it out for a spare, although we prefer to use a portable USB charger), and Samsung specifies a 3220mAh cell. Fast charging allows it to go from zero- to 50 percent in 30 minutes.

Meanwhile, the Samsung Galaxy S5 has a smaller 2800mAh battery, but also a lower-resolution screen and slower hardware. It comes with a fantastic Ultra Power Saving Mode that can squeeze an extra 24 hours of life from the S5 once the battery capacity gets down to 10 percent by switching to a greyscale screen mode and turning off inessential apps. Samsung has already added this feature to the S5 mini, and we see no reason why it wouldn’t also add it to the Note 4.

Arriving a good six months after the Samsung Galaxy S5, it’s no surprise that the Samsung Galaxy Note 4 has significantly faster hardware. It’s important to note, however, that all flagship smartphones are now very fast, and the chances of the average user being able to tell the difference between them is minimal. However, what might sway you in the new Note’s favour is its larger, higher-resolution screen and potentially longer battery life. Whether it sways you enough to part with an extra £200 over the S5 will depend on your budget.